Wednesday we were off to a new venue, Dozen docena 12.  Eddie had eaten here not long ago and said it was well worth a try.  It was more difficult than usual to get a red truck as it is Semana Santa (Easter the busiest holiday of the year in Mexico) and there was a large cruise ship in however, Ruth and Pat prevailed and we were picked up and on our way.  This is a restaurant just a few blocks west of Home Depot on La Marina Avenue and we can't get there by bus. 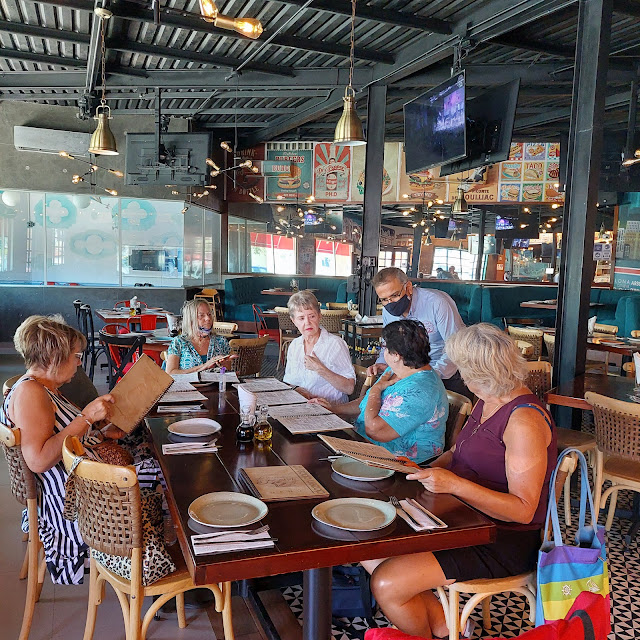 Seated and ready to order drinks.  A very large and tasteful restaurant and as they are a bit out of the way we were their only lunch customers and so had their full attention! 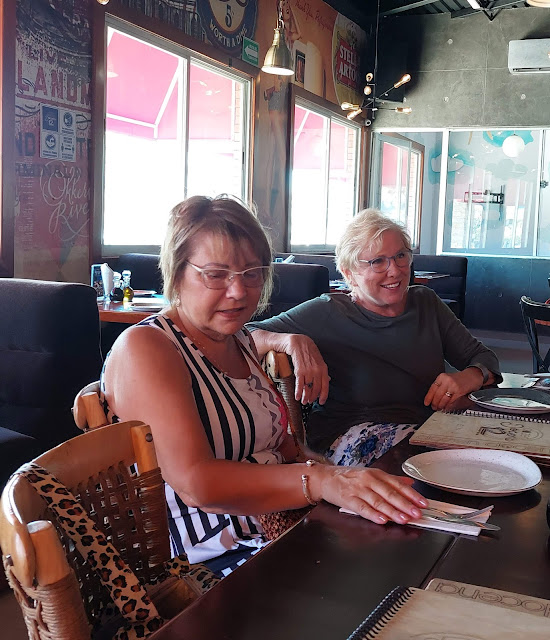 Georgia is looking down at her purse where her little old dog is tucked away.  She is 14 and gets very stressed if left alone.  Doesn't make a peep and just naps in her bag.  She did pop her head out when I had my burger and I gave her a tidbit! 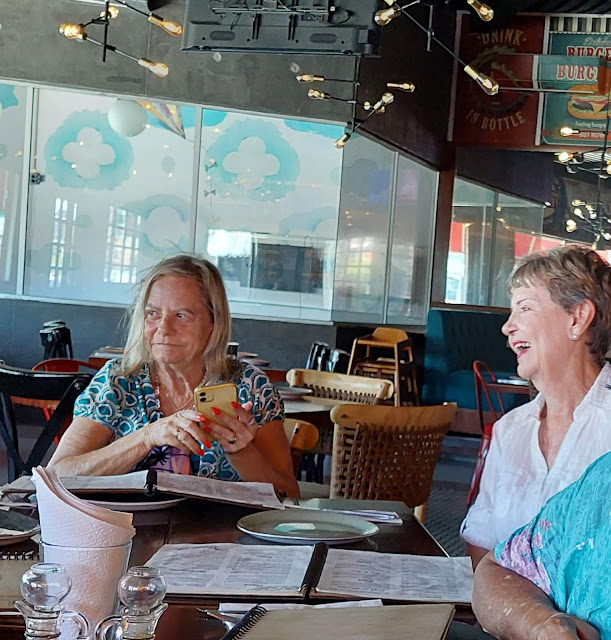 Bev joined us today and that is Connie laughing. 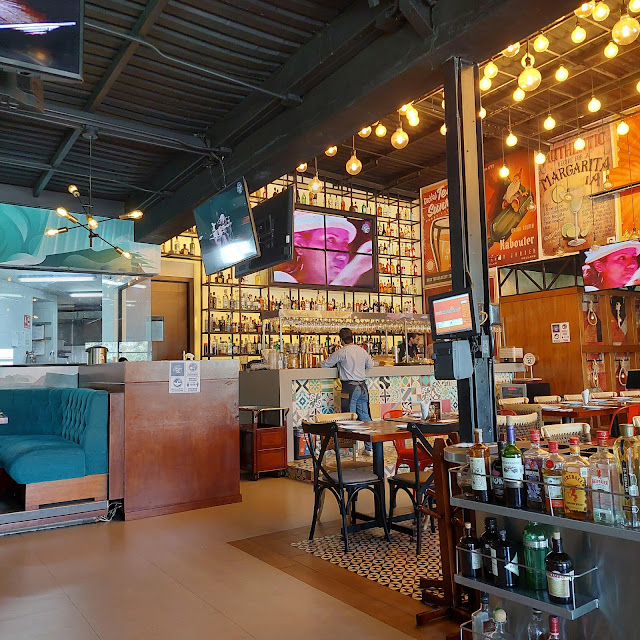 A very extensive bar and you can see the chef cooking behind glass to the left. 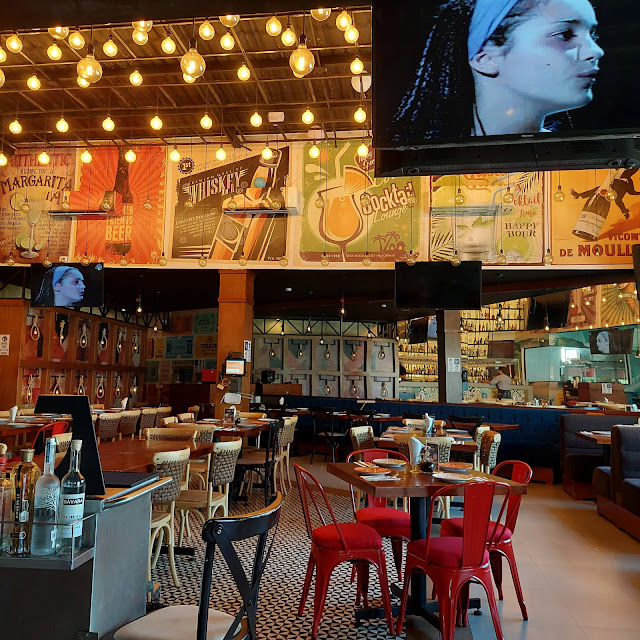 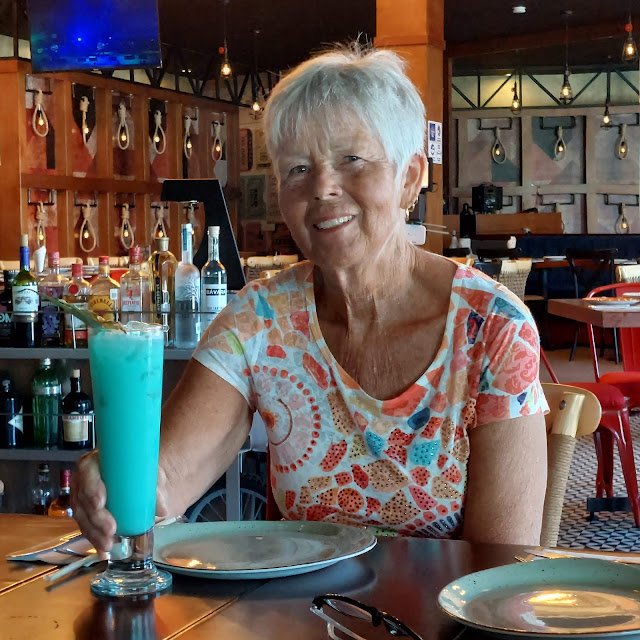 So this is my Happy Colada and why it's blue I couldn't figure out but it does match my top.  Very tasty. 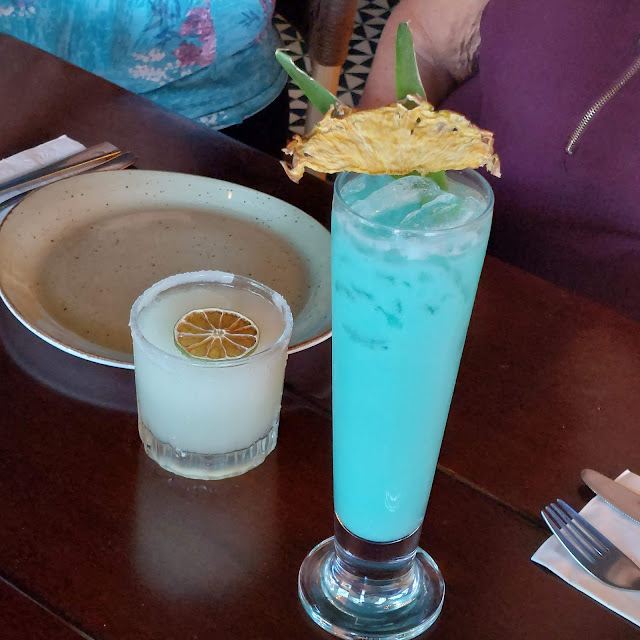 That's Marilyn's margarita beside my drink. 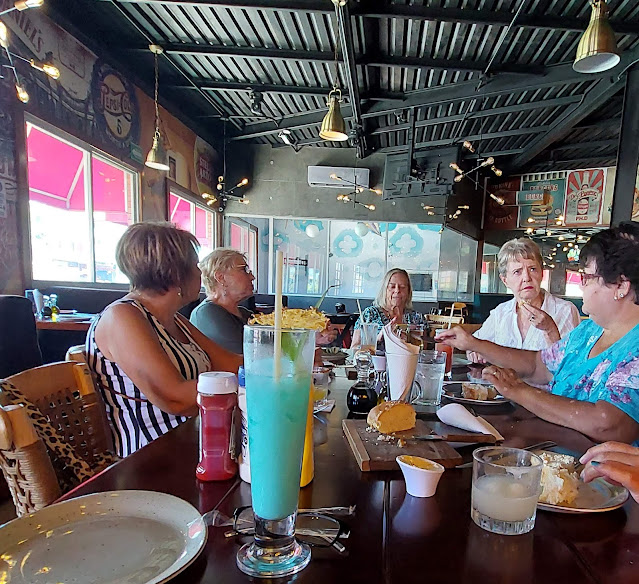 We were served what was supposed to be artisan bread but it was just regular old bread! 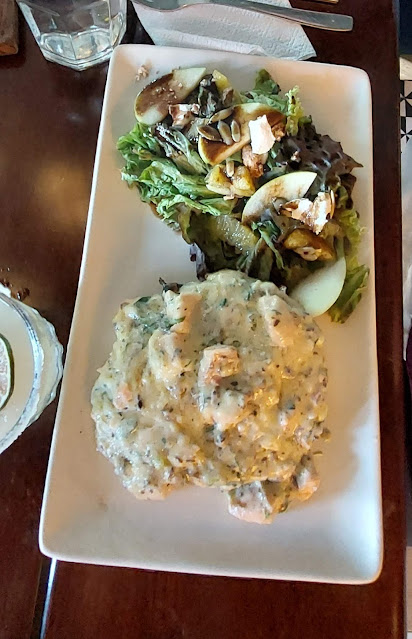 This is Marilyn's Portobello Anne Bony...portobello mushroom with salmon with a tasty cream sauce served with a side of Marilyn Salad!  She was just going to have the salad until she saw this.  Very, very good she said. 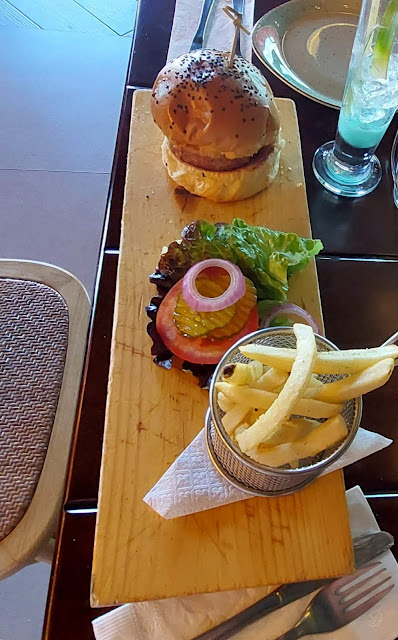 This is my Dozen burger.  Ground ribeye with fries.  I am not a fan of the bread here so I ate the burger salad and fries.  The bread lacks gluten as they don't have good Canadian wheat and it has no stretch.  Eric's cousin  in Scotland who is a baker says Canadian wheat makes the best flour for bread! 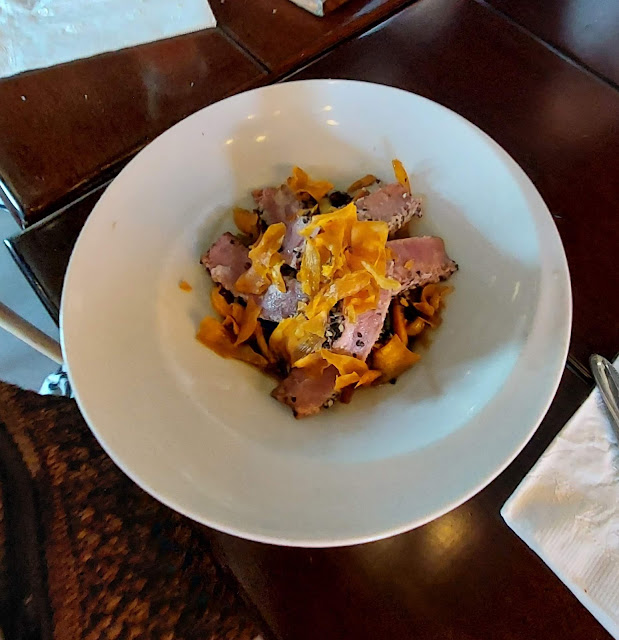 Ruth and Georgia split an order of oriental tuna so they could have crepes suzette for dessert!  Tasty but a bit over cooked was the comment. 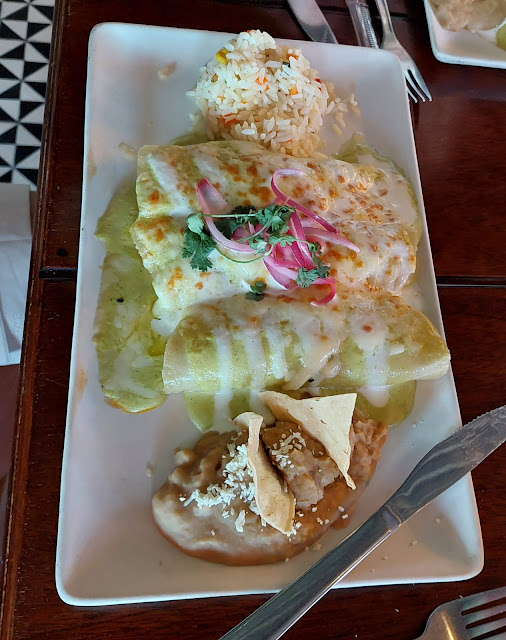 Enchiladas suiza for Connie and Bev. 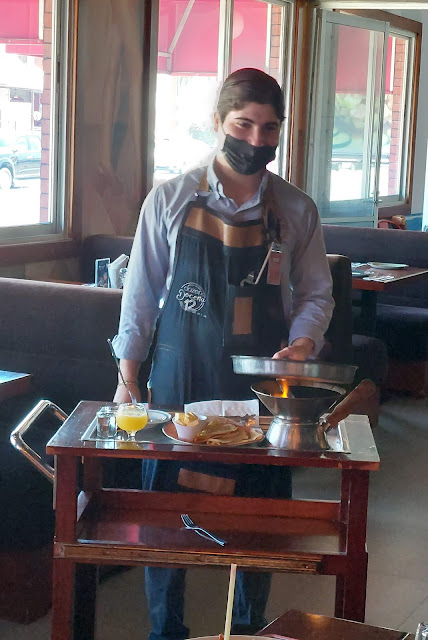 And now for dessert! 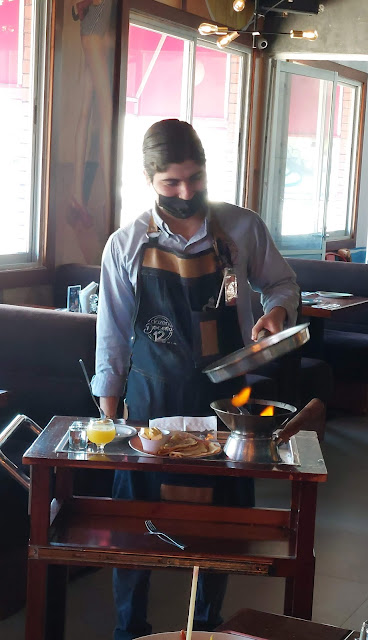 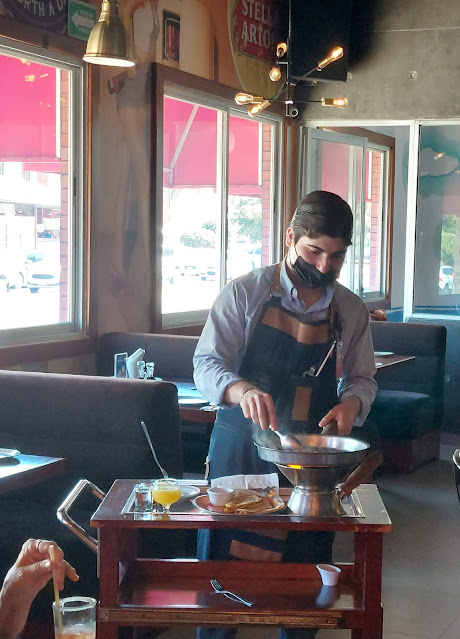 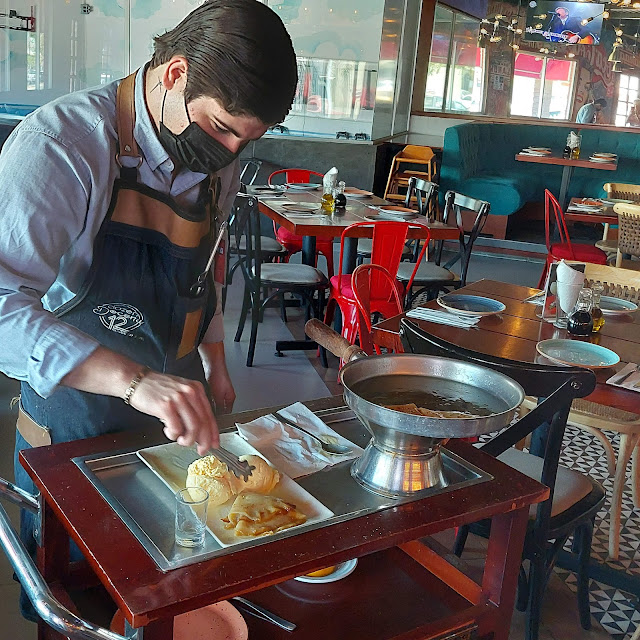 The crepes are then dipped in the sauce and served with ice cream.  I think Ruth and Georgia more than enjoyed dessert!!  I was too full for even a taste. 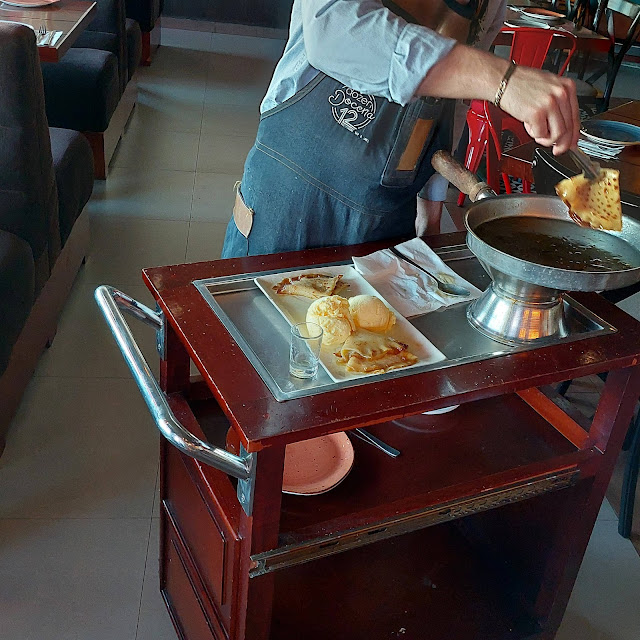 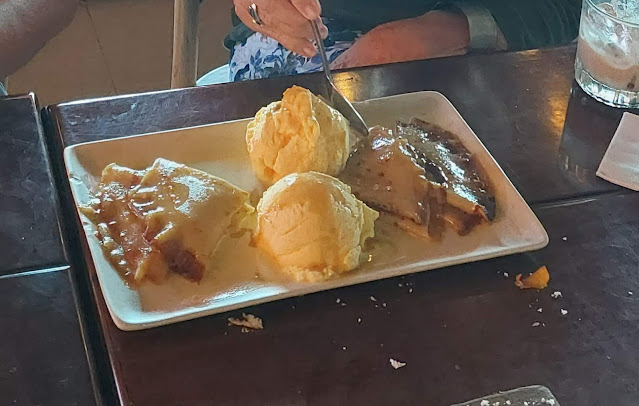 More than generous for a split order. 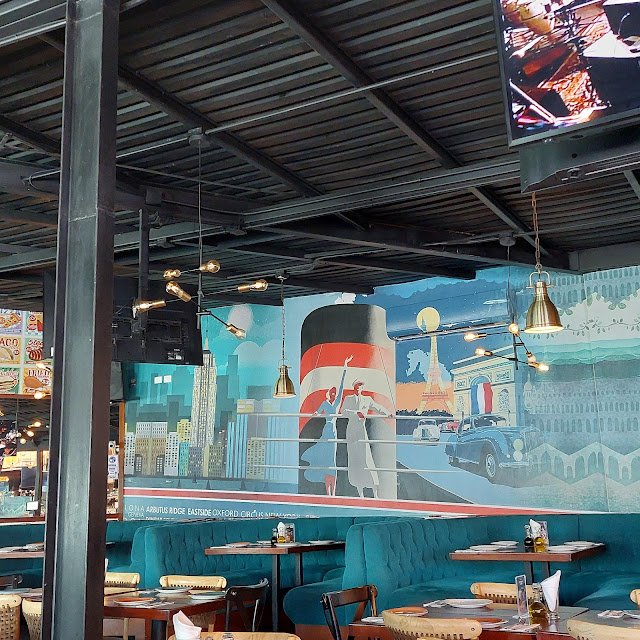 Very interesting decor.
Everyone enjoyed their lunch.  The food was well presented, not over priced and the service was A1!
Well worth the visit and there extensive menu would give everyone something to try.  The restaurant called us a truck and the same driver who delivered us came to pick us up.  Two dropped off in the Golden Zone, Marilyn and I at the south end of Cerritos and Ruth in the north.  Pleasant guy who spoke English and Ruth kept his card for the future.  A very nice afternoon.
Posted by Kathy Tycho at 3:19 PM