What’s been going on!

Well, lots!  I spent the first week unloading the rig and then, since the weather was shi..y I washed down the inside as well.  What a good girl!  Okay, it really was weather dependant and since it was raining anyway it was easy to do.  I also made a list of all the things I need to buy before we leave next fall since it is easier to remember what I want to take now rather than try to figure it out later.  When I got that all done there was six months of mail to look at as well as the taxes to be done and  I put my head down and got that out of the way as well.  Meanwhile Eric was getting the rest of “Big Red’s” importation done.  Thanks to Sam for her new name, it really fits.  Turned in our proof of time in Mexico to ICBC for our winter rebate and then got our old dog Moxie back for the summer.  Our daughter Erika and husband Wade along with granddaughters Abby and Holly did a great job looking after her for the winter.  They even let her sleep in the house when it was too cold outside! 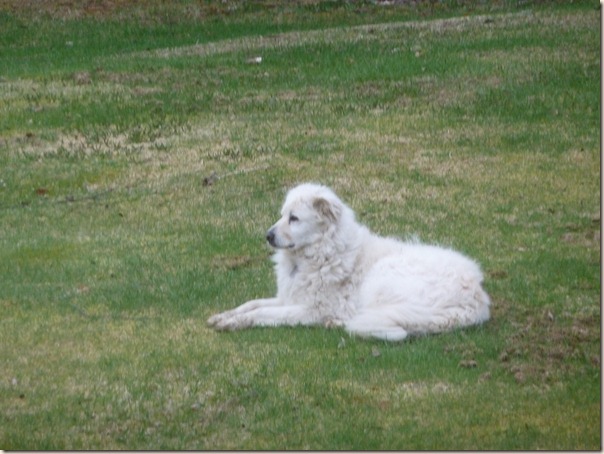 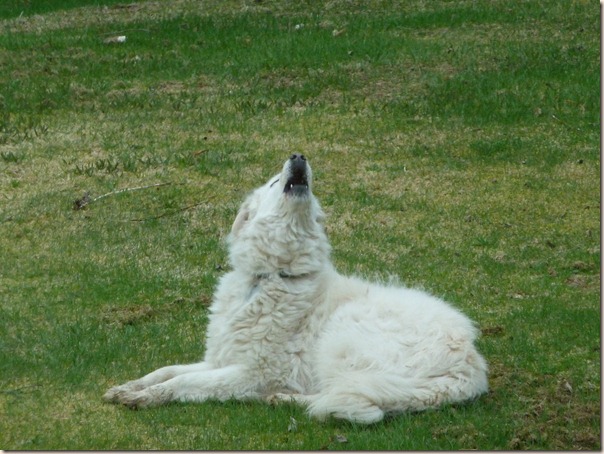 Get out of my yard bear!

Luckily she has realized that she can’t chase them anymore and besides that she is quite deaf now.  The nose still works well!

She was 13 in the winter and they have had her with them for the last four winters and for that we are really great full.  She is as much their dog as ours and I think she has a special spot in grand daughter Abby’s heart.  We have been arguing with a black bear since we got home as to who actually lives here and I think we have finally convinced him that it is us! 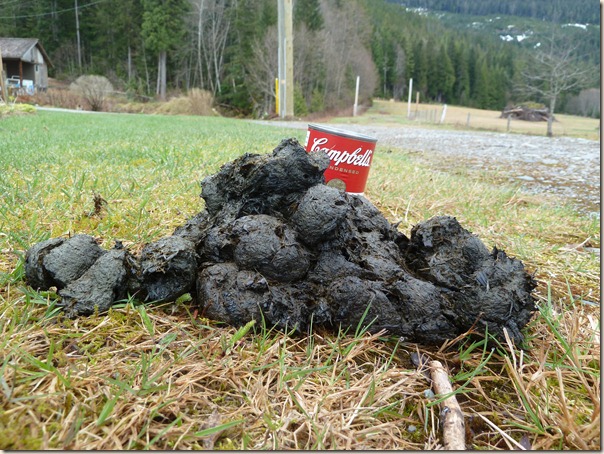 Guess what that is and who it belongs to! 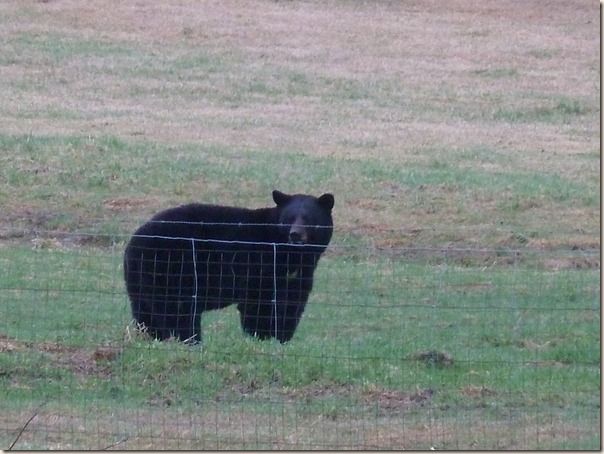 If you guess him, you are right.

Yelling and shooting birdshot in the air helped a bit.  A bit of birdshot in his butt helped too and finally Eric ran him with the tractor and I think he finally gets it.  There have always been bears up on the hill grazing in the spring and that’s fine with us but I don’t want them in my front yard.  This guy thought he could be a lawn ornament but I say “NO.”

I helped out a bit with Holly over last weekend as it was her final dance recital and Erika had a horse show to run as well as pony club testing and since Wade was away another driver was needed.  That was me and it was great to see the final recital as I don’t get to see any of that over the winter.  I didn’t get to see Abby ride in the horseshow but I’ll catch up with that at the next one. 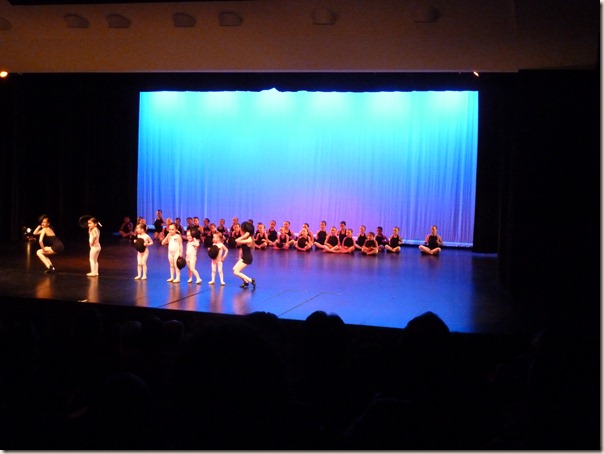 These are the little tiny dancers and the are so cute they bring tears to your eyes. 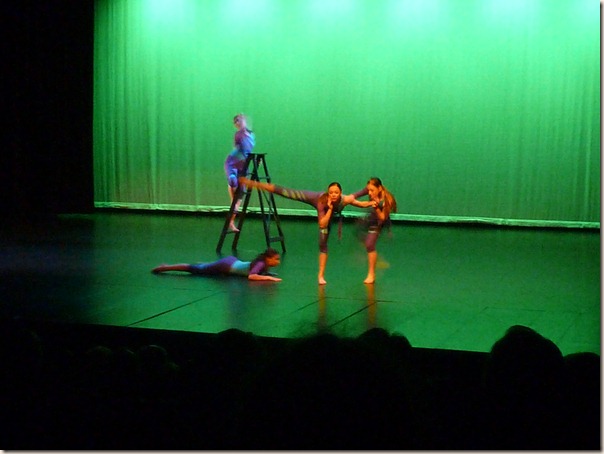 Grand daughter Holly is on the ladder!

The next few days were spend getting all the dead stuff off the perennials and then getting a lawn mow clean up done.  Eric was great because he got all my garden machinery up  . and running quick so I was ready to go.  I am now trying to get things done in the garden since the house is pretty much in order and Eric has washed the outside of the rig and is now waxing it.  A really big job and of course he has found some delamination right were he thought it would be on the slide and he will deal with that as well.  RV’s are so sloppily manufactured that there is always something to fix and it is an ongoing job.  It is great to have it under cover now so the washing etc. can be done out of the rain.

So in the end we have managed to get a huge amount done in the last 2 1/2 weeks and feel like we are moving ahead with things.  Eric has even managed to squeeze in a couple of rides on Big Red.  Oh, I forgot he also rebuilt Blue’s starter and she is back in business.  He has decided to offer her for sale so we’ll see what happens with that.    He could keep her if he wants but I think he’s thinking it will be hard to ride them both.

For those of you who might wonder where we live here are a few pictures. 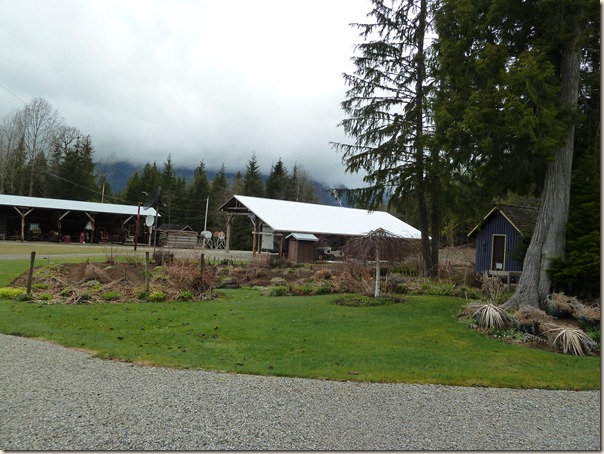 That’s Eric’s new pole building on the right where the rig is now stored when we are home.  If the sun was shining there would be a big snow covered mountain behind that cloud.  Oh, did I mention how cold and winter like it still is here.  We’ve had a few nice days but mostly cloud, wind and rain.  Yuck. 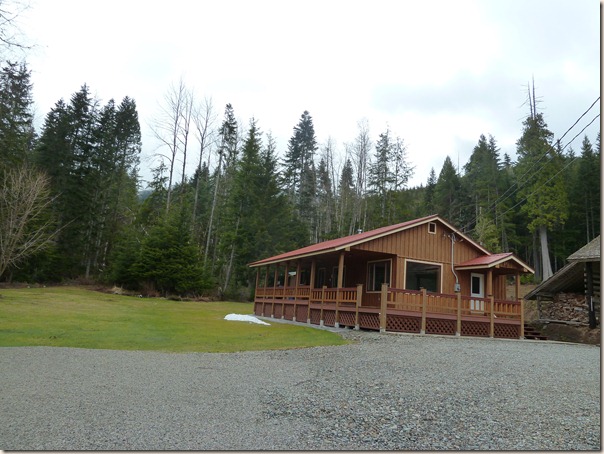 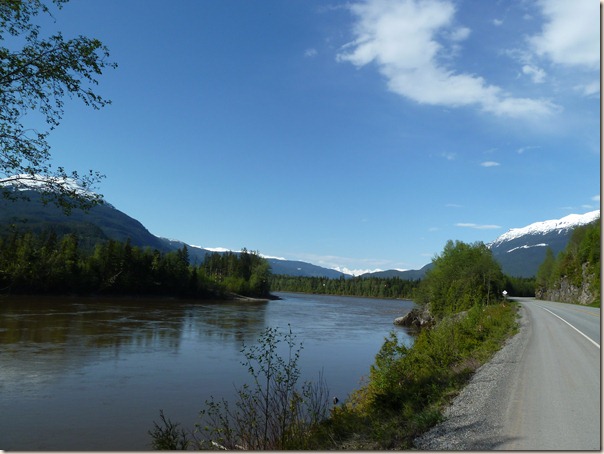 This is the beautiful Skeena River that we drive along on our way home.  The Seven Sister mountain range is in the distance. 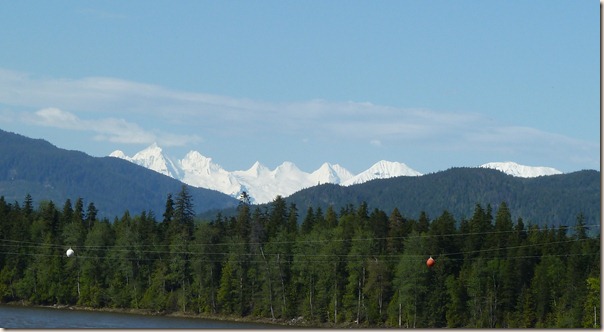 We live in a very beautiful area, especially when the sun is shining.

Posted by Kathy Tycho at 2:52 PM No comments:

We left Prince George at about 7:15 am yesterday morning in the rain and fog (4C)  which makes for nasty driving conditions.  By the time we hit Fraser Lake and stopped for breakfast and fuel it had eased off a bit and it was lightening up.  Better.  As we drove it was amazing how cold and late the spring is.  Snow everywhere, no leaves and all the lakes are still frozen and here it is the 2nd of May.  We have never seen it this late.

We couldn’t get into the pumps to get fuel in Fraser Lake because you know…..someone was parked in the way inside getting….pop? chips? cigarettes?   So breakfast and fuel down the road.  The breakfast was an expensive special with rubbery pancakes which was less than mediocre and I am really tired of eating out.  It has worked well for us stopping for a later breakfast and then no lunch but hard to find good food so I’m glad that’s over with.  The fuel stop at the native Esso Station (Stelat’En) was a good one.  They are cheap and really friendly and nice so they are where we will stop from now on.  As we passed through the Burns Lake area still no leaves and even the big lake was still frozen.  Crazy.

By the time we hit Topley we were getting dry spots and it was a bit warmer 6C and the next stop was Houston to dump the p….p!  We rolled in and stopped and the dump had no water and said “Closed for Winter”  Hey, it’s May you know.  We decided to dump without using water but that went bad.  We started but the drain must have been frozen and we had a back up.  Yikes, stinky stuff that.  We packed up and decided to dump at home in Eric’s new dump tank.

It was a bit greener and warmer in Smithers and up to a balmy 10C.

As we got closer to home about 5km south of Princess Lake we had the scariest and potentially most dangerous incident of the whole trip and it was all due to human stupidity.  We were coming down a hill with the river and an abutment on the right and a double no passing line and a rock face on the left and as we came around a corner there were two bicyclists riding two abreast in our lane.  Eric was already geared down and hit the brakes and the horn at the same time as we rolled up behind them.  They were chatting and “DID NOT MOVE OVER TO THE SIDE OF THE ROAD” Eric kept on the horn and they finally moved when he was almost touching one of them.  A young woman with a helmet and a young guy with no helmet.  There was plenty of paved shoulder for them and when we slowed down and opened the window to yell at them the girl gave us the finger.  Eric yelled” Do you want to die!!!! Are you trying to get yourself killed!!!! and then we moved on.  We absolutely could not believe that it even happened.  We could not have gone around them into the other lane and made it back if someone was coming the other way.  Absolutely and completely nuts!!! If they don’t get killed they certainly will get someone else killed.  As we drove on there were many semis coming south and also a fully loaded B train behind us so we knew what could happen.  If my cell phone had worked out there I would have phoned the police.

So, in the end we made it home and Eric walked up the hill to check the driveway for snow.  No snow!  In we came but there was a tree across the road so he had to get the chain saw and cut our way in.  Everything at the house looked pristine and just the way we left it six months ago so that is a huge relief.  You just never know.  We pulled into Eric’s new building to park under cover and went up to the house to turn on the power.  One huge pile of bear shit at the edge of the driveway and we could see the culprit out in the field grazing.  Good, stay out there!  The house looked good and so did the garden except for one small tree that had most of it’s branches broken off from the snow.  Oh well, it’s not dead.

We switched on the power, set up, turned on the heaters and had happy hour.  Journey done.

Today we will have to run our gravity water system to clear the mud out of the lines and then turn on the water in the house.  We drain all the lines before we leave in case the power goes out while we are away so it is a one day job to start everything up again.  There is always that potential for leaks when washers have been dry for six months.

It is nice to seen green trees and the mountains of home.  Eric is already overwhelmed with the immensity of the projects that await him.  We had a huge wind storm about three weeks before we left last fall and the aftermath of that is everywhere.  Everything in good time!!!

Hooray, Hooray it’s the first of May.  Now there is another part to this happy saying but it is x rated so I’ll leave it out.  Okay lets try this…..Eric used to work with a woman named Glenda who finished the saying with “Out door scr..i.ng starts today.”  You figure it out!  She was a nice Gramma looking type lady with a foul mouth.  It’s hard to think of the first of May without recalling Glenda.

Our trip today was good.  We got up a little late 6:45 am and yes we were a little stiff from our two hour hike last night but ready to hit the road.  Out of the driveway, byes said to Ian and on the road by 7:30 am, not bad.  Since it is Sunday the roads out of Kelowna were quiet and so was the rest of the trip.  Sunny and warm but supposed to change to cloud and rain showers tomorrow.  Oh well, we can’t complain.

We stopped for a brunch in Cache Creek and filled up with fuel and back on the road.  We rolled in to the Bon Voyage on the north end of Prince George at about 5:30 pm.  $15.00 for plug in and we didn’t have to unhook, so an easy stop.  A long day but good driving conditions so we aren’t too bagged.  Tomorrow we will get up early, hit the road and have breakfast in Fraser Lake before we finish the drive home.