Heading back to Phoenix

It's Halloween afternoon and we are sitting in the Calgary airport waiting for our flight back to Phoenix.  It's been a busy month at home and lots was accomplished due to our beautiful October weather.  October is usually rainy in Terrace but....not this year.  The fall colours were outstanding and lasted almost the whole time we were home.  I managed to put all my perennial gardens to bed and...got almost all the leaves mowed up with my riding mower and put back on the beds as mulch. 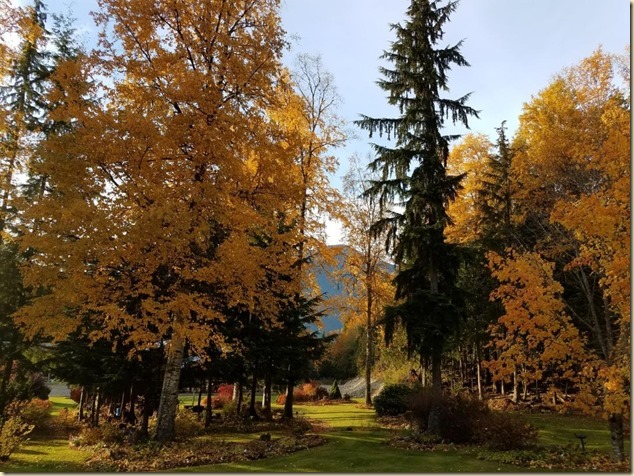 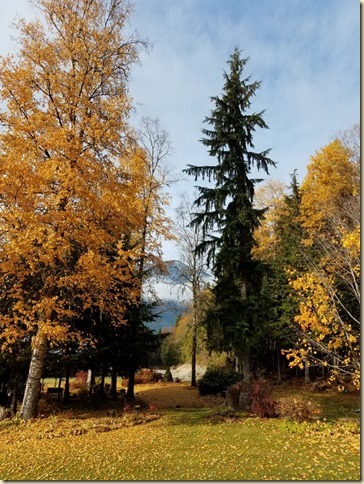 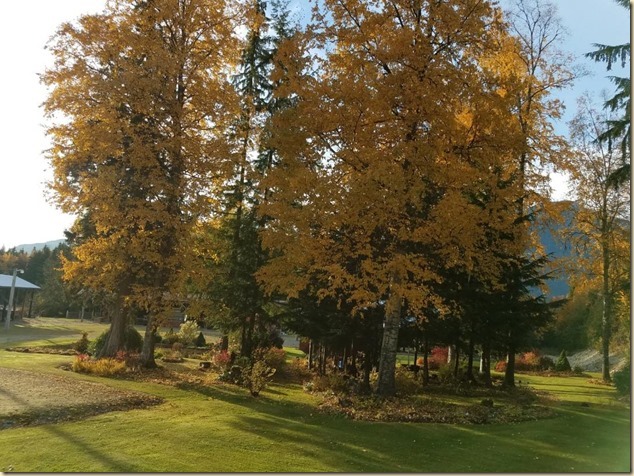 Eric spent his time at home removing the old 1980s pasture cross fences.  He wanted to get it done before the posts completely rotted and had to be dug out.  A big job as there was over a 1000 feet to do.  Remove staples, pull posts, fill holes and roll up the wire.  Initially he had hand split about 750 cedar posts from trees cut on the property so they lasted a long time. 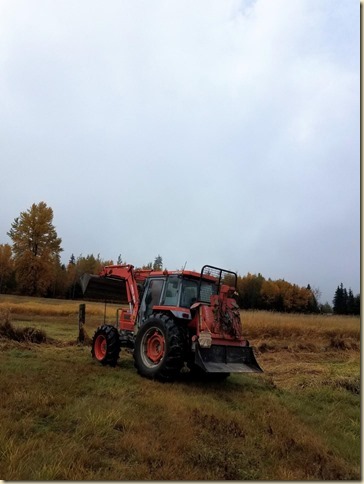 Tractor ready to pull posts with a chain that I wrap around. 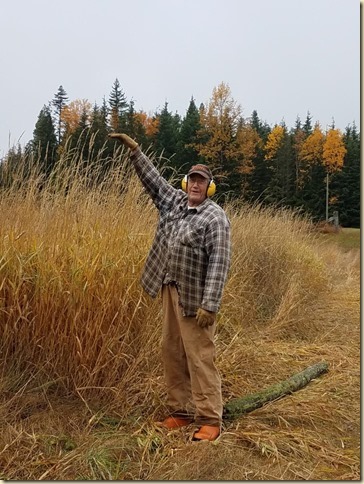 This field is damp and Eric didn’t mow the reed canary grass that grows so well there.  Tall! Heading down the line. Lots of posts to pick up and lots of holes to fill. After this fence line the ones you can see to the right and left of the barn in the distance were also removed. 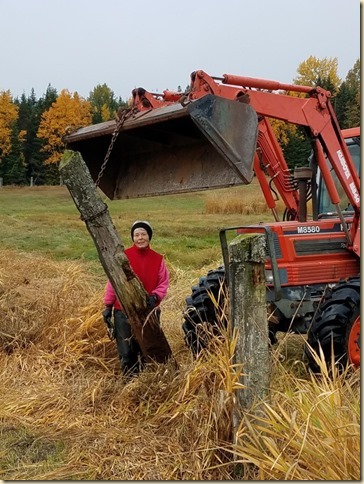 Don’t I look snazzy with my typical outdoor gear on! 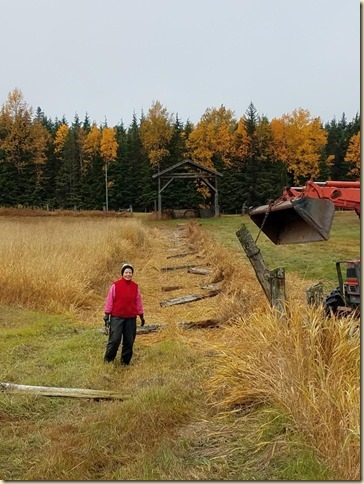 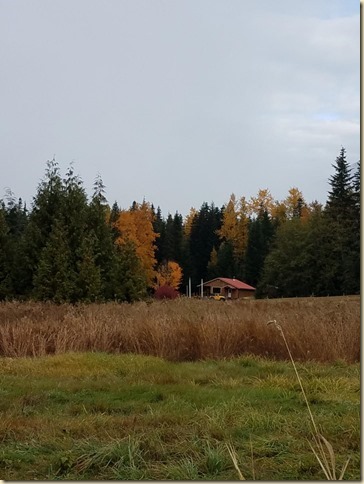 Looking back at the house from where we are working.

We feel like everything is in good shape for our return in the spring.

Yesterday we did the house shut down...drained and blew out water lines, antifreeze in dishwasher and washing machine pumps as well as all drains.  We don't leave heat on in the house so everything freezes.  We took all leftover food to our daughter's last night and she fed us a nice Mexican taco dinner of Pacific coast halibut and then we spent the night.  This morning she took us to the airport and...here we are.  Into Phoenix tonight where we will stay for a couple of days before heading south to Why, AZ.  I’ll stock up the RV before we go and when we get to Why Eric will fix our leaking sewer valve.  The worry is that the liquid leaked out while we were away and…the solids that were left behind have dried out and blocked the sewer outlet at the base of the black tank.

Plan for the worst and….hope for the best.

Posted by Kathy Tycho at 3:38 PM No comments:

A Day in Phoenix and ….the truck problem wasn’t as bad as it could have been.

It rained over night and continued on this morning.  There was major flooding around the city.  Eric was off in the truck for his 8am appt and I waited to hear the news.

He returned before 10am and it turns out the problem is the water pump.  It will cost $1500 US to replace it and change all the coolant fluid.  We consider ourselves lucky that it isn’t the head gasket which would have cost almost as much as the truck is worth to repair.  Eric didn’t know how he was going to get home as the dealership had said he could just take an Uber which we know nothing about.  Turns out they call and pay for Uber so that is a good thing.  The truck will be ready by 6pm tonight but Eric will wait till morning to pick it up.  He said it is a huge shop with about 30 mechanics working so they push a lot of vehicles through. 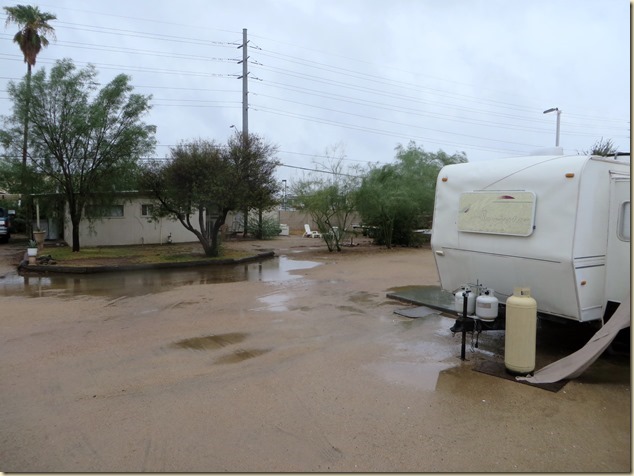 By late morning the rain had eased off leaving great big puddles.  However I don’t think the storm is done with us yet. 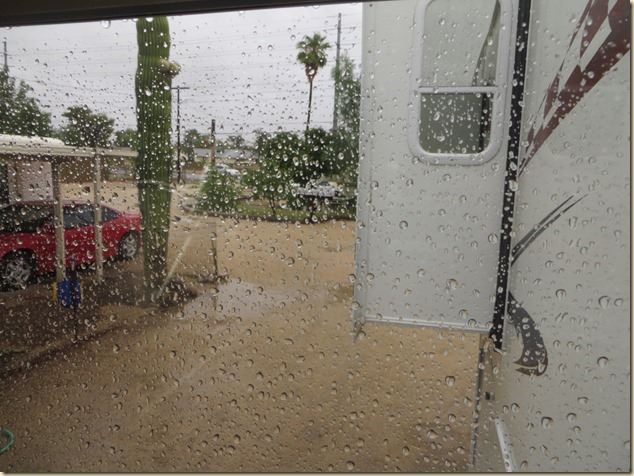 Our windows were filthy from all the dust of travelling and now they will be clean but it didn’t clean bugs off the front of the RV that we picked up in Idaho. 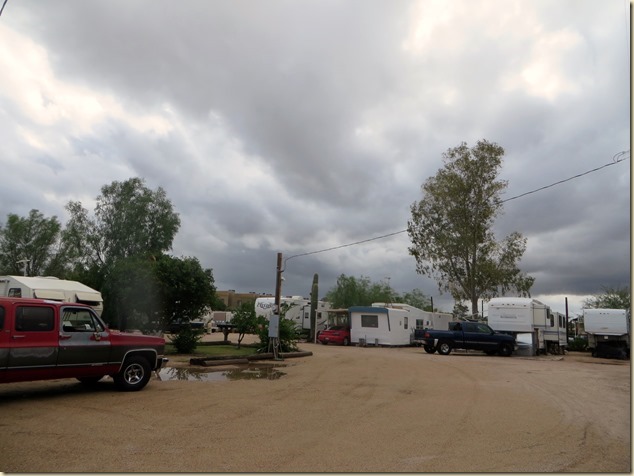 Looking in at the park …that’s us just to the left of Jim’s red car. 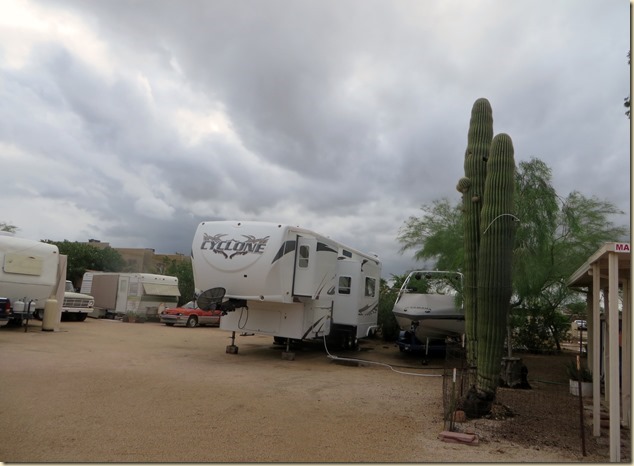 The 5th wheel will be safe and sound until we get back on Halloween day.

Only 149 miles on the final leg of our journey south to Phoenix before we fly home on Thursday.  We went into Phoenix on I10 and took the 101 loop to get our destination.    When we stayed in Mesa for the winter back in 2008/2009 we were new to all of the freeways and didn’t use them.  Now we do as they make travel around the city so much easier.  The country mice are gradually getting used to being city mice! 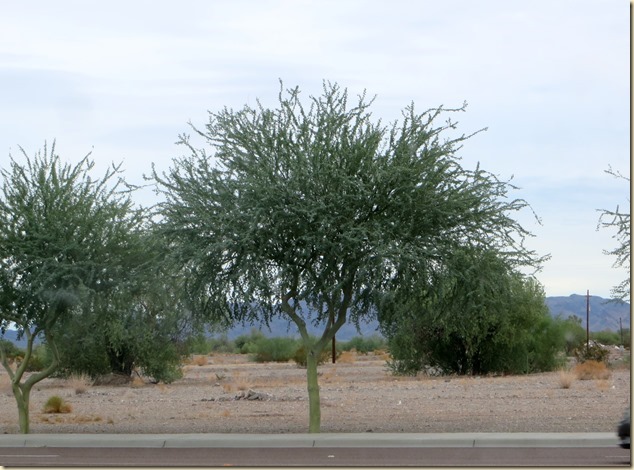 As we left Quail Run I took a picture of a Palo Verde tree.  Even the trunk is green! 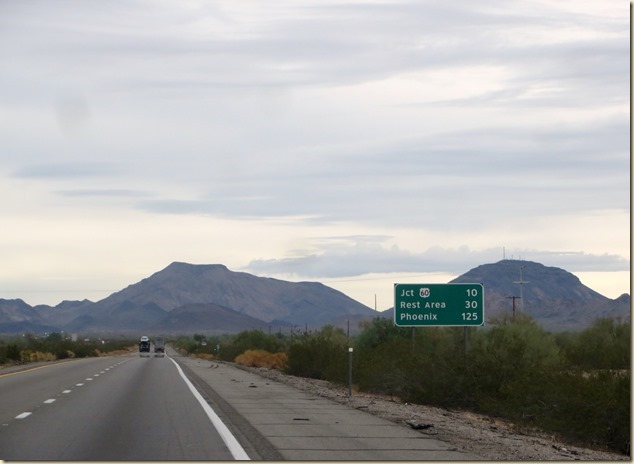 The weather was cloudy in Quartzite and there was a little rain in Phoenix but no wind so it all looked good.

We stopped at a rest stop 30 miles out and the truck coolant level was down a touch.  Then we stopped 30 miles past that and it was the same.  We’ll be glad when we get the problem diagnosed. 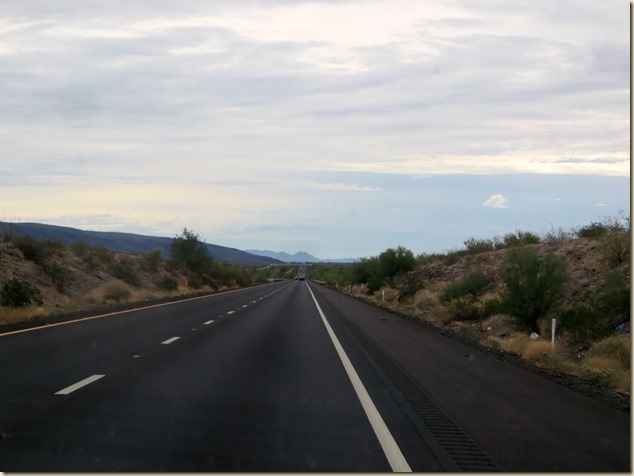 Straight open highway and the traffic wasn’t too bad.  As we only do 60mph we are usually on our own as the cars and trucks blast by us. 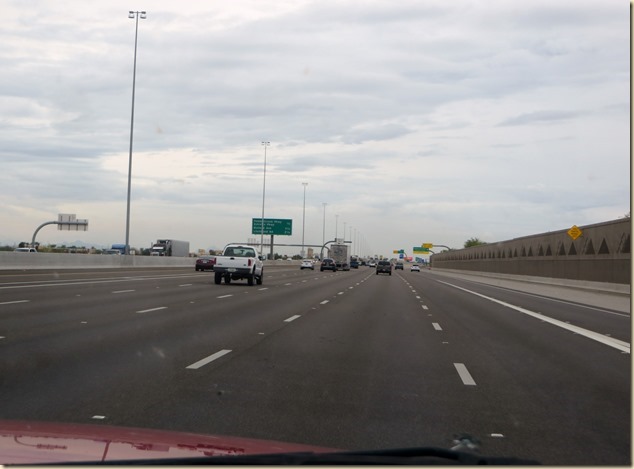 Coming into Phoenix and we left I10 and took the 101 loop north around the city to 51 where we got off on East Bell road. 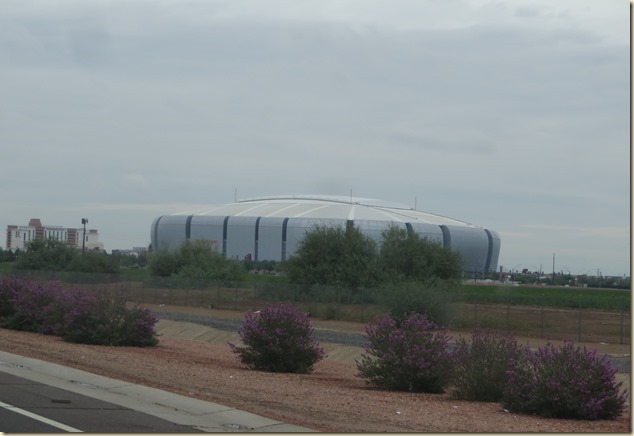 The State Farm Football Stadium in Glendale.  It features the first fully retractable natural grass playing field on top of an Airfield drainage system.  The stadium opens on one side and the whole grass floor rolls outside to get sunlight and then the floor of the stadium can be used for concerts etc.  It cost 454 million to build. 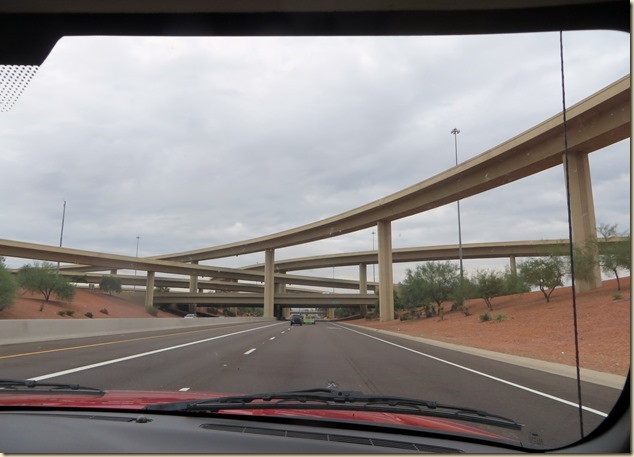 Here highway 17 to Flagstaff was rolling over top of us and the vehicles were whizzing on and off the ramps.  This morning the underpass was flooded from all the rain.

We arrived at our destination (Frank & Sandi’s small RV park) by lunch time.   We went over to say hi to Jim the park manager and he told us where we could park which is the same spot as two years ago.  All good.

After lunch we were off to find a GMC dealer to have a look at the truck and get RV parts such as fuses, seals for the dump valve and a new friction plate for the 5th wheel hitch.  Eric got an appointment at a dealer for the truck to be looked at tomorrow morning at 8am and then we were off to Al’s RV parts for what we needed.

All in all a  decent day and hopefully what is wrong with the truck is not huge.  As long as it’s not a head gasket which would cost thousands of dollars to repair all will be fine.

Hope for the best!

Posted by Kathy Tycho at 4:07 PM No comments:

A Day in Quartzite.

It started out as a cloudy day on Sunday.   I did laundry while Eric crawled under the truck to check the sewer valve and then… 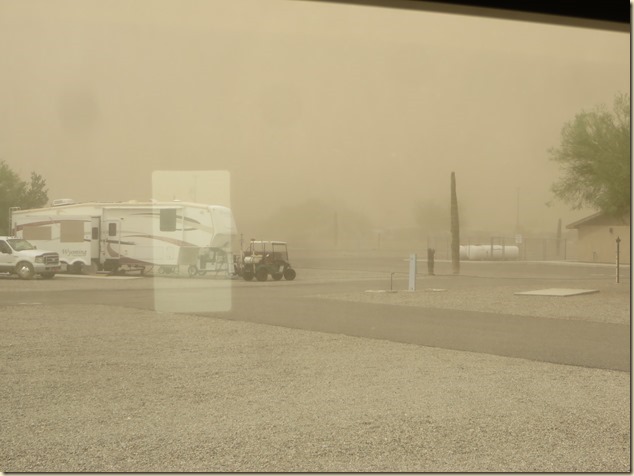 Around 11:30am Eric could see the dust coming and then it started to blow…hard.  Shortly after that…it rained heavily for a short time. 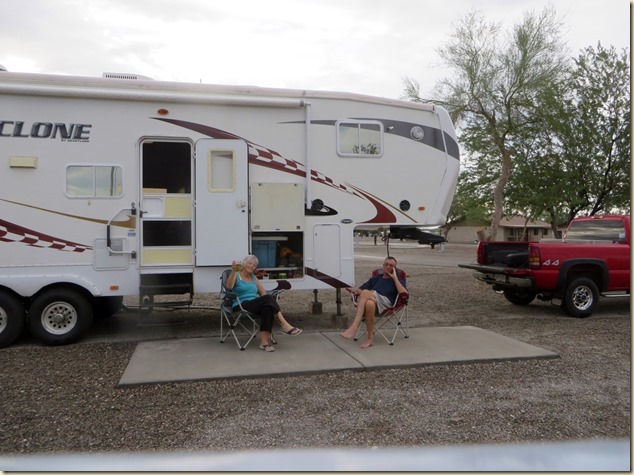 By 5:30 it was hot and steamy and we sat outside to have happy hour.  Eric looks a little glum and will stay that way until we find out what is wrong with the truck. 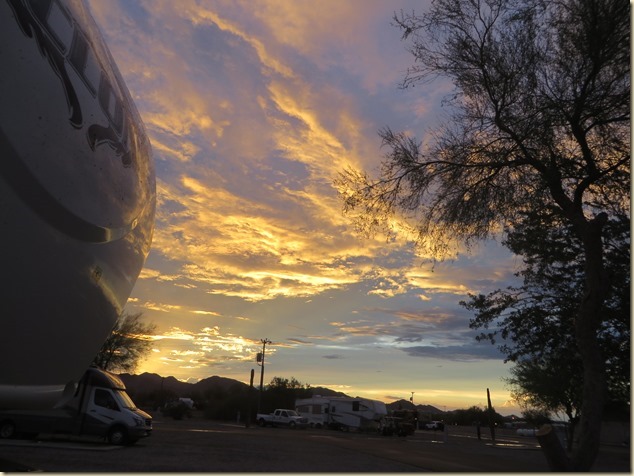 As the sun started to set we got a glorious sunset. 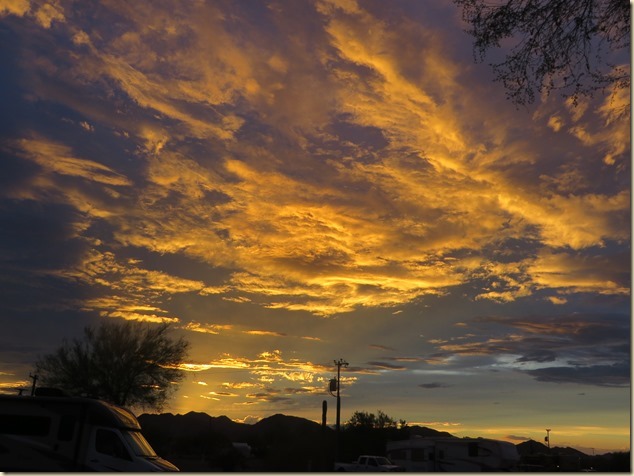 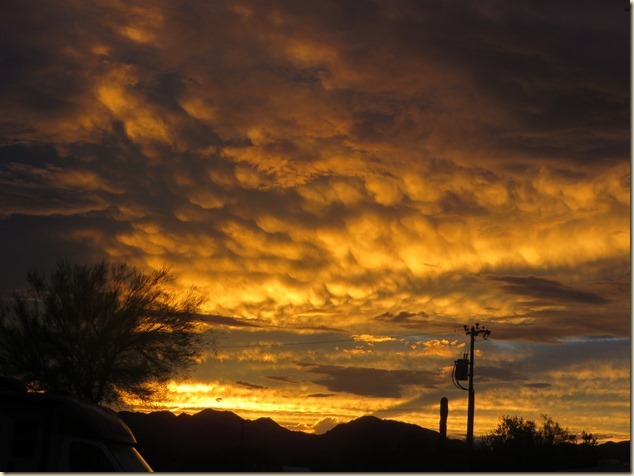 The sky is on fire. 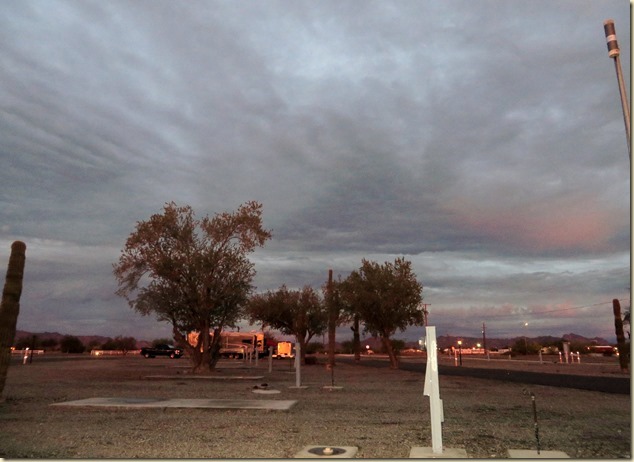 All over…time to go in and have dinner.  Tomorrow off to Phoenix.  We’re hoping the remnants of hurrican Rosa will hold off as we travel.  There, the first order of business will be RV parts and booking an appointment for a dealer to look at the truck.