The Nutcracker at the Angela Peralta Theatre

Tonight I was off to the ballet with Ruth, Eddie and Sue. 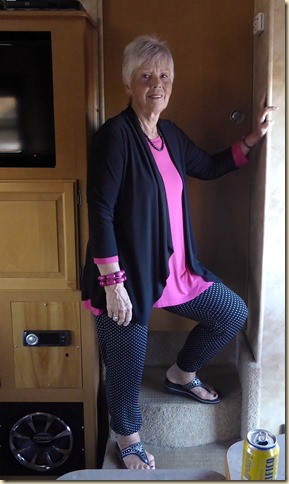 I did get dressed up so I thought a picture was in order.  Sorry about the beer can but it was happy hour for Eric.   Ruth and Eddie met me up front and we were picked up by an “ Uber” that Sue ordered.  Even in Mexico…. as if there wasn’t enough transportation already.  We picked Sue up in the Golden Zone and then onward to…. 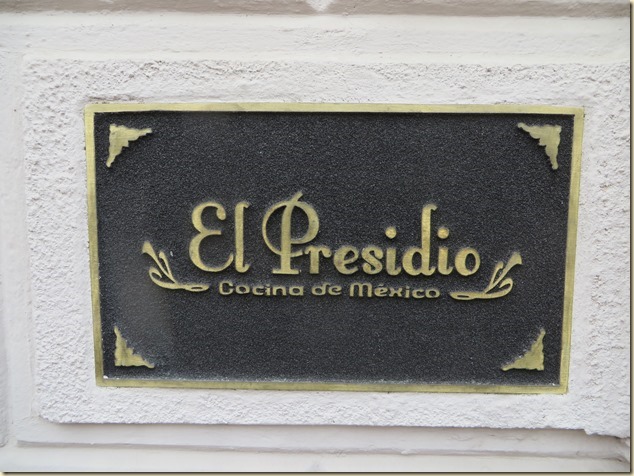 El Presidio for a 5:30pm dinner.    One of the more upscale restaurants in town with lovely ambiance and good food. 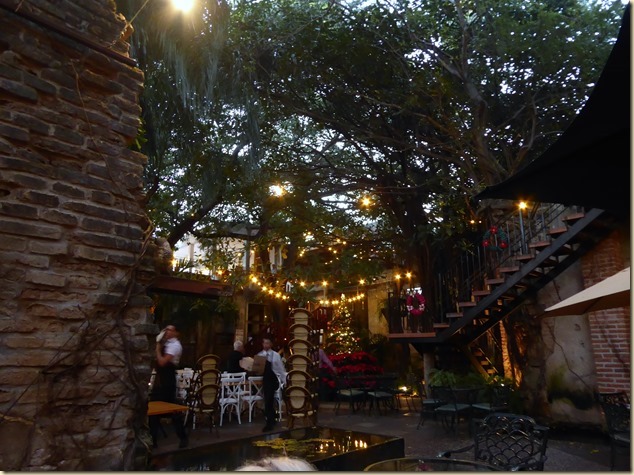 We lucked out with the weather as last night there was a huge rain and windstorm and all the streets downtown were flooded.  Good thing I decided on a Saturday night outing!  Much of El Presidio has no roof so we’d have had to sit inside. 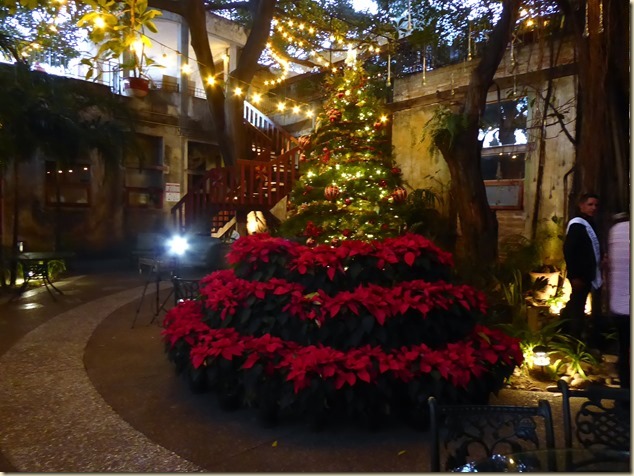 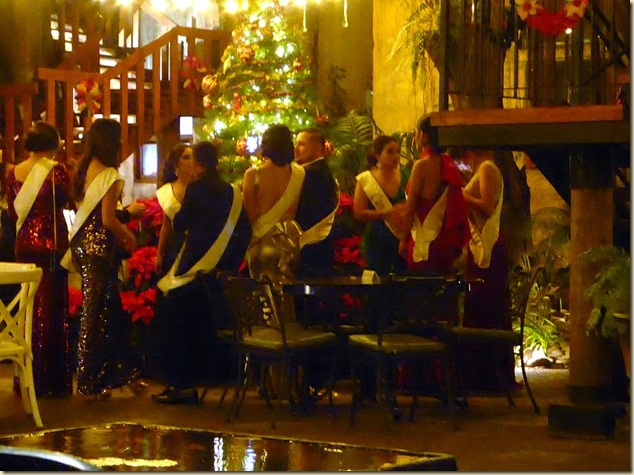 It was very quiet when we arrived at 5:30 except for the large delegation of candidates.  I’m guessing it is for carnival queen.  They were very lovely young ladies. 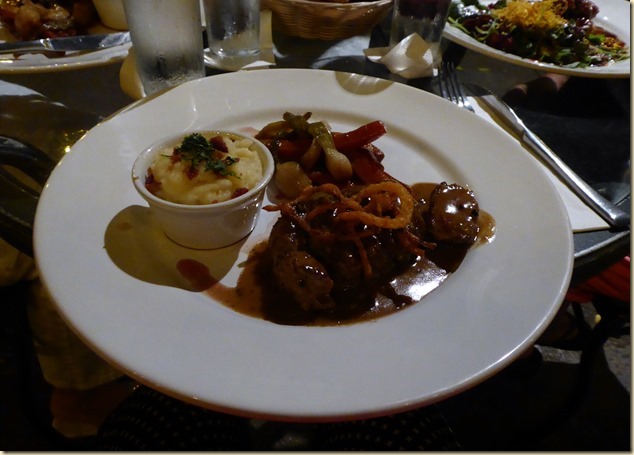 So drinks were ordered and served.  White wine, pina colada and a Mojito for Ruth.  I had a taste and I might need to try one in the future.  Above is my filet of beef covered in poblano pepper sauce served with garlic mashed potatoes and roasted vegetables.  Delicious and Ruth ordered the same thing. 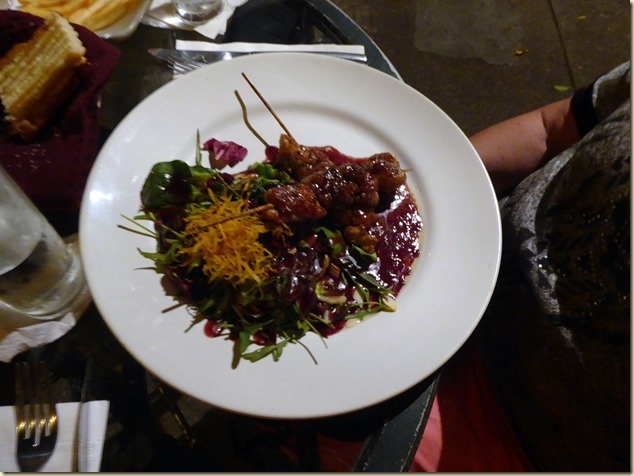 I think this is called Hibiscus Chicken..  Eddie ordered it and said it was also delicious. 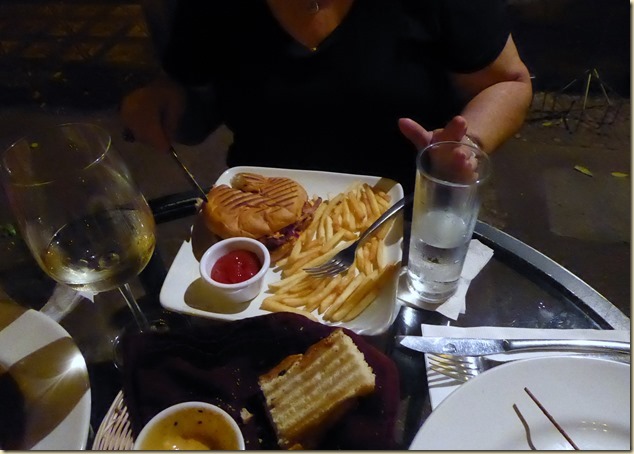 Sue had a pulled pork sandwich.  At the bottom you can see the bread and spicy cheese dip that was served as an appetizer.

We did actually share a couple of desserts but I lost focus and forgot to take a picture of the warm chocolate cake with ice cream and the chocolate mousse so….you’ll just have to visualize it! 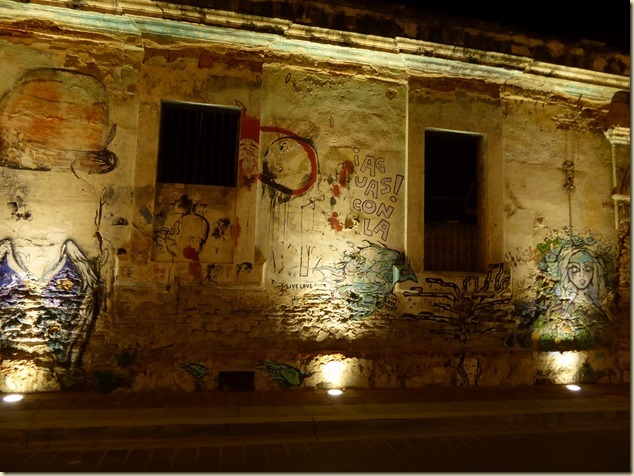 Dinner done and time to head to the theatre.  Across the street from El Presidio are many graffiti paintings that people get their picture taken in front of.   Another time! 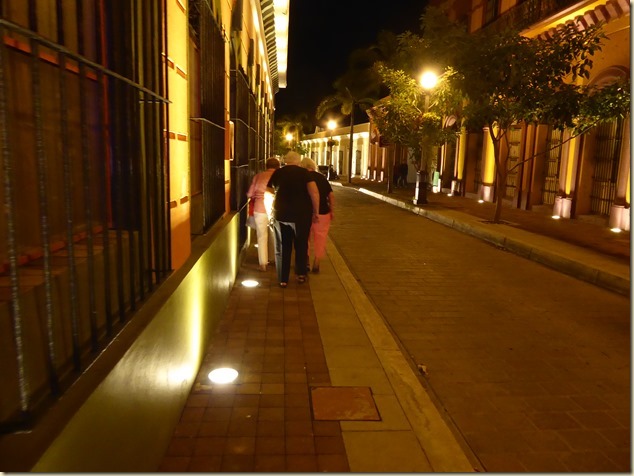 Off down the street. 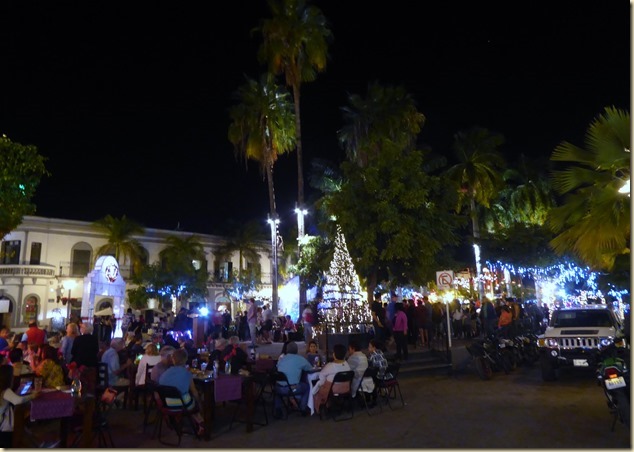 Tonight (Saturday) was the lighting of the Christmas decorations in the Plazuela.  It was supposed to be last night but….too much wind and rain.  There was a choir of young children getting ready to sing but I didn’t have time to get a picture. 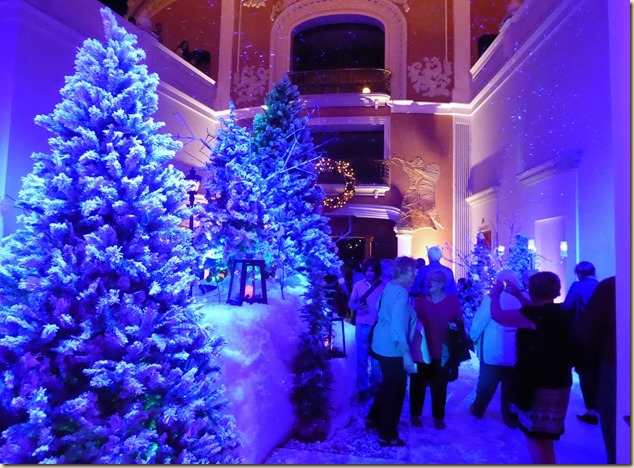 This is the inside entry to the theatre and it was just lovely.  The lighting is blue and there was snow falling.  Some sort of tiny foam which would likely be very difficult to clean up.  Oh well….I don’t have to do it!  Very festive. 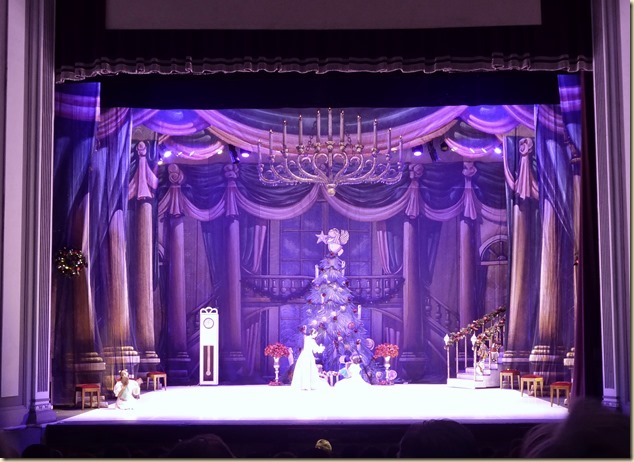 We are seated in the middle in row N so we are quite aways back.  I took lots of pictures but I was shooting between peoples heads in front of us.  I didn’t want to hold the camera way up as the display is quite bright and it would bother other people watching.  I also did not use a flash. 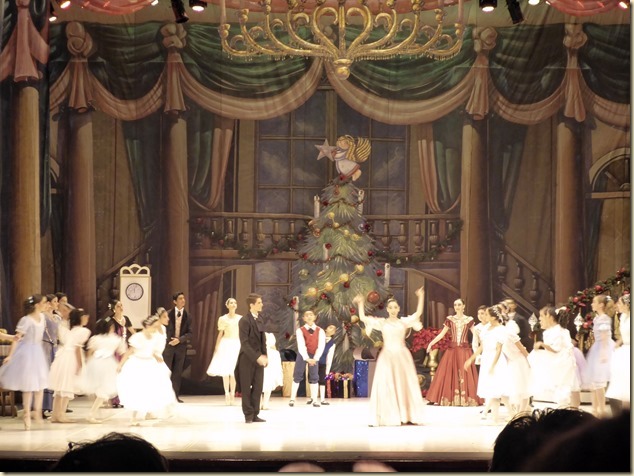 I will not try to explain the Nutcracker story as I’ve done it before and if someone cares to know they could just look it up. 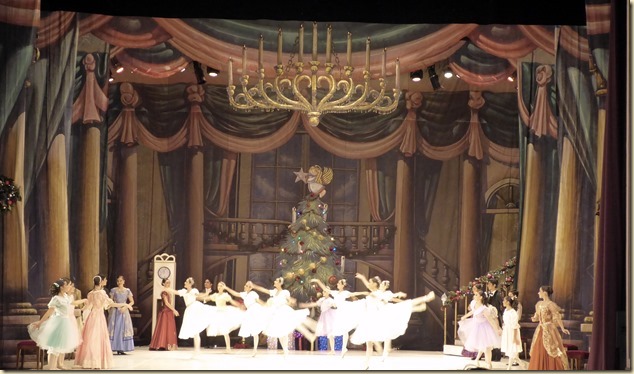 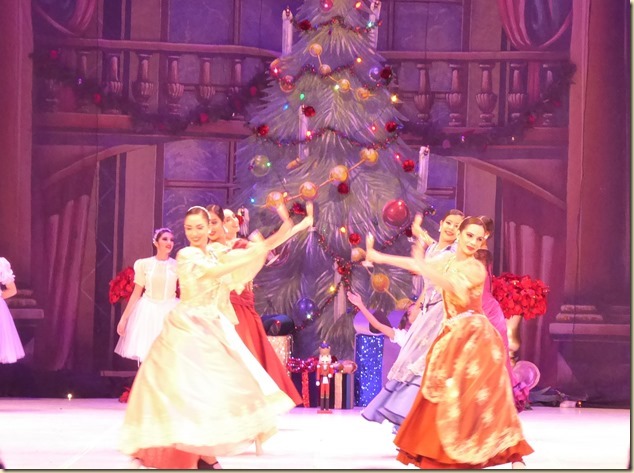 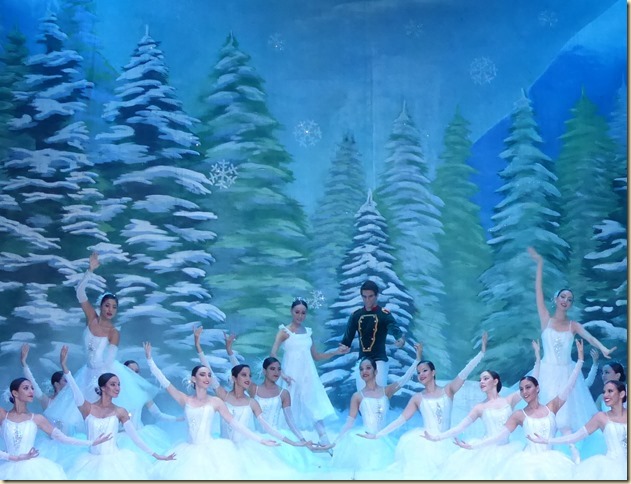 It’s intermission and you can see that even the balconies are festive. 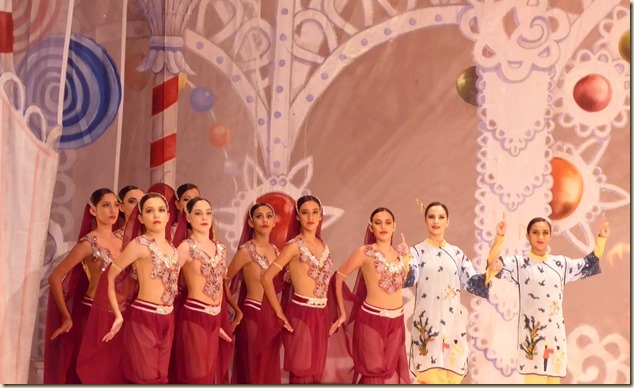 I am happy with pictures as some were zoomed in low light and are quite crisp (that’s camera talk….haha!” 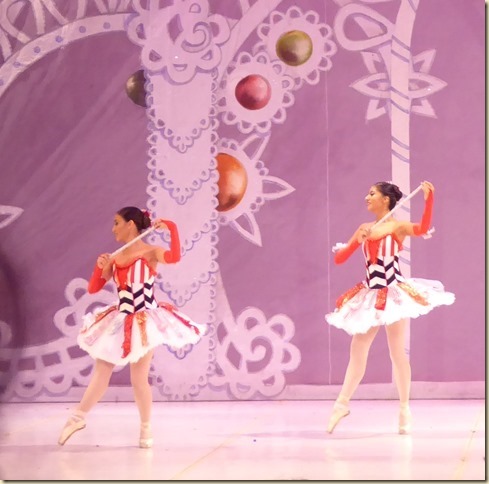 The whole performance was very polished and the only thing I couldn’t get a good picture of was the mice.  There were lots of them and they were just so cute. 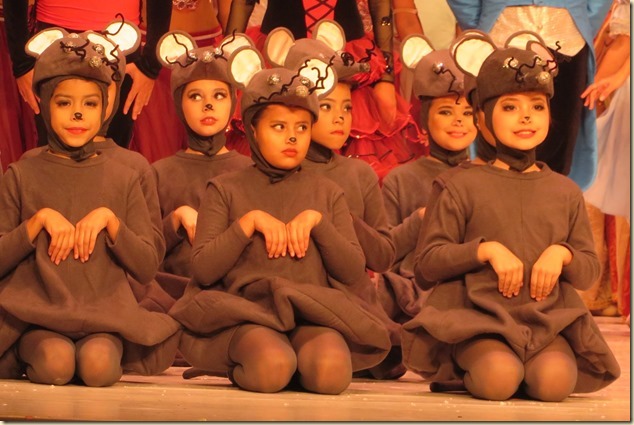 This photo is from 2016 when I was very close to the stage and could get a good picture.  Aren’t they adorable! 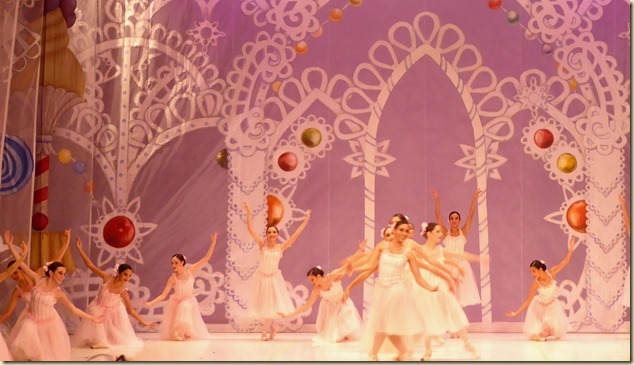 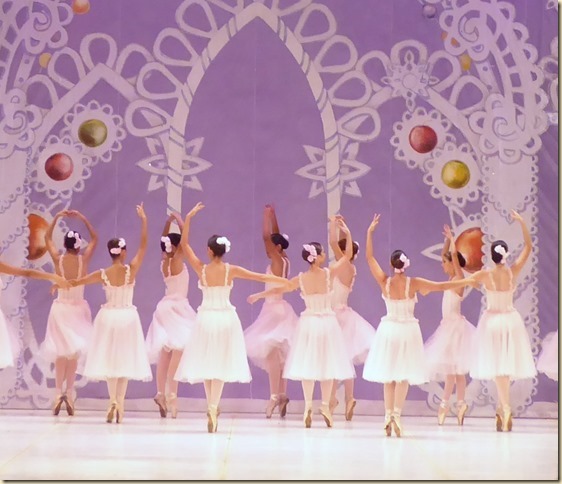 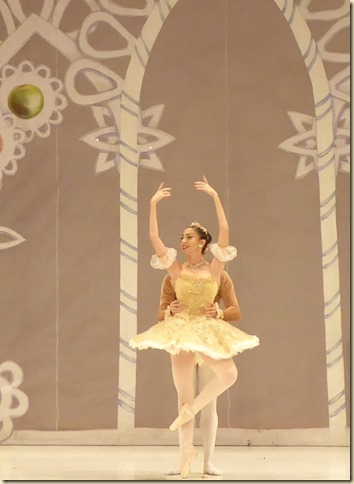 The Sugar Plum fairy…..I didn’t like the gold….thought “plum” would have been a better color but that’s just me! 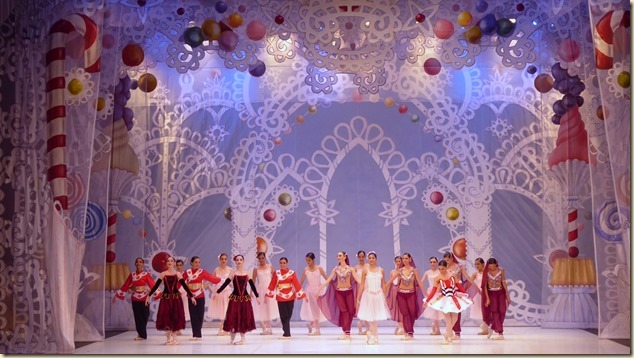 The performance drawing to a close.  Bows by everyone except….the mice!   I always enjoy this ballet and will probably return again and again.  This was a first time for Ruth and Sue….not sure about Eddie. 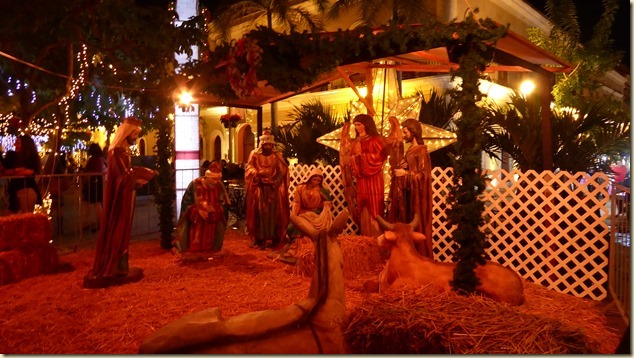 Back in the square and there was a large nativity scene.

We managed to find a pulmonia who was willing to take us home for 250 pesos so off we went.  The Uber was 130 but that was early in the evening and it’s more expensive later.  No issue as it’s all cheap anyway.

A good time was had by all and as we travelled along home in the warm evening air Eddie and I commented on how happy we were to be here in Mazatlan for the winter.