“To lunch or not to lunch” on the day after Christmas.  In the end we decided to go!  We’d started out with La Corriente which is downtown on the malecon as today’s choice.   However Sandi wanted to come and as she is away for Christmas she wanted us to wait until she returned and go somewhere else.    She suggested Latino’s which is a new restaurant and a 5 minute walk south of the park. 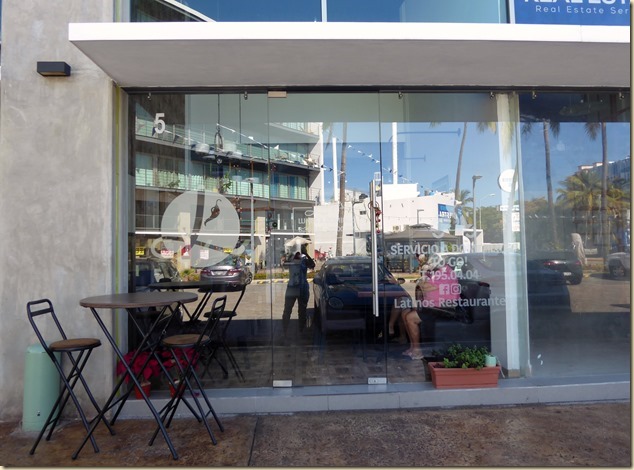 In the square called the “Lofts”  which is just past the Marina Gardens residentional on the east side of the street there are two new little restaurants.  One is a cafe called El Seis which is basically a coffee shop and the other is Latino’s where we went for lunch.  It’s hard to spot but it’s a couple of doors down from the Farmacia.  Marilyn and Dennis as well as Frank and Sandi had eaten there and said it was very good. 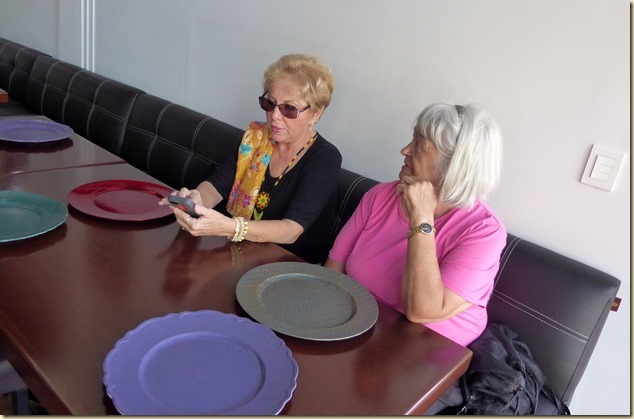 Ruth gave Eddie and I a ride from the park and Connie showed up with Lil and Bev.  So….just six of us. 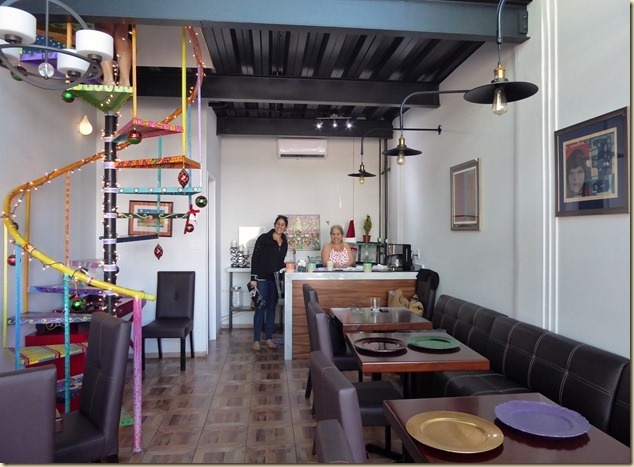 A narrow little restaurant in “ a loft.”  I wouldn’t be surprised if the owners lived upstairs.  Love the spiral staircase.  Our very pleasant english speaking waitress is on the left. 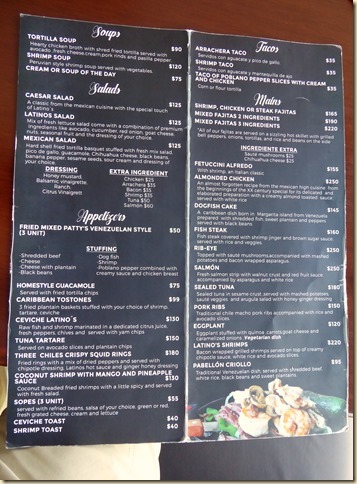 The menu.  They do serve breakfast as well and there is a separate menu for that.  They also deliver. 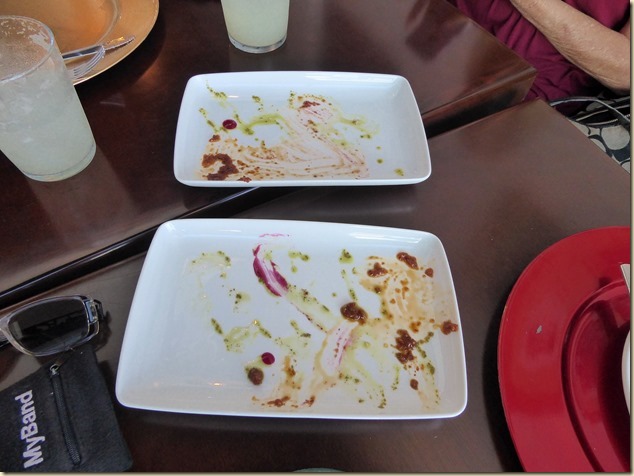 Empty plates!  We were served two complimentary plates of deep fried sweet corn dough with an in house spicy salsa on the side.  The dough was hot and delicious.  We all dove in and I forgot to take a picture! 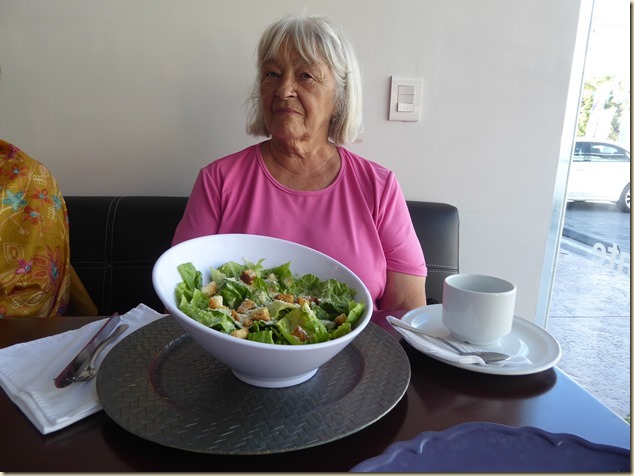 Eddie ordered a caesar salad and I just love the bowl it came in. 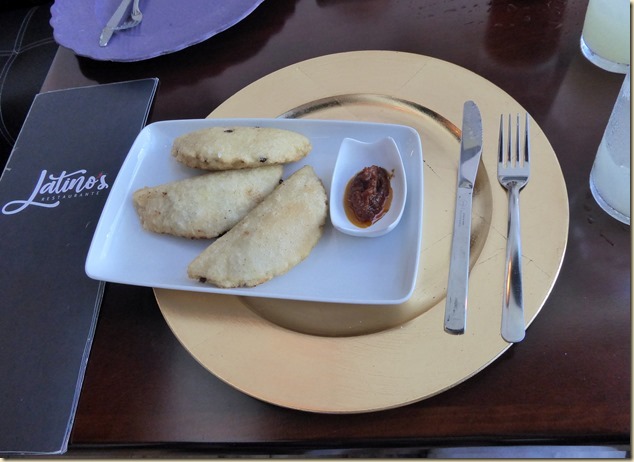 These are empanadas with a variety of fillings.  50 pesos.  Lil said that the dough is the best that she has ever eaten and that says a lot as she eats out frequently and lives in Mazatlan.  Same dough as the appetizer plate. 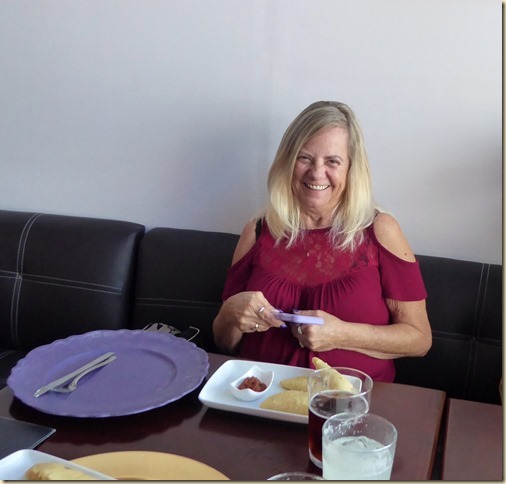 Bev, Lil and Ruth all had the same thing. 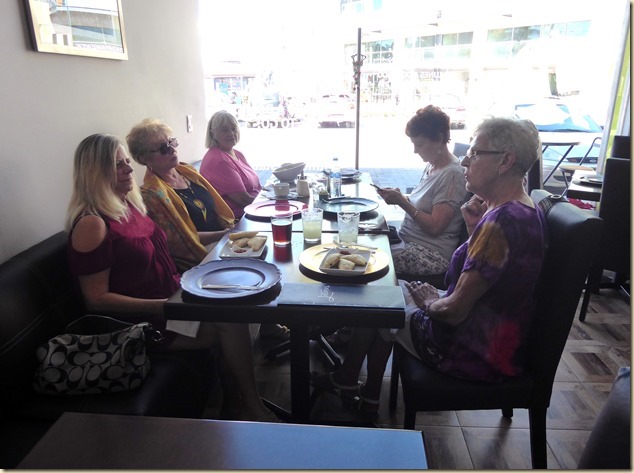 Bad picture with all the outside light.  You can see how classy the furniture and decor is. 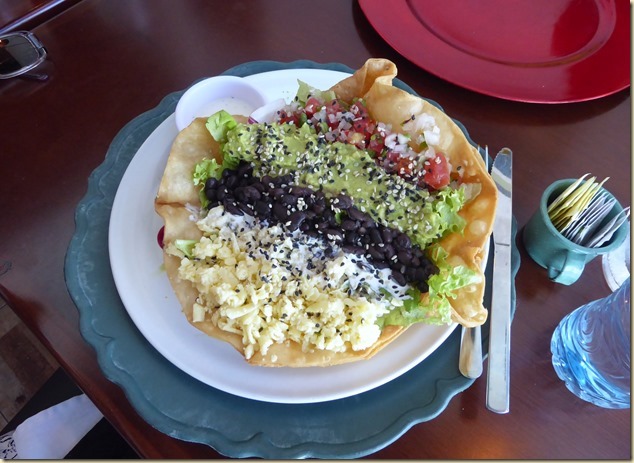 Connie had the Mexican salad served in a tortilla bowl.  You can add shrimp/chicken etc.  Looks lovely…125 pesos.  She said it was delicious and I tasted the bowl…yummy. 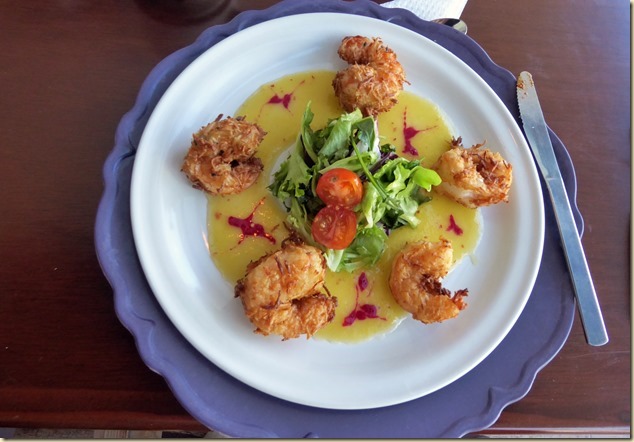 I ordered coconut shrimp with a mango and pineapple sauce.  It had a small salad in the middle.  The empanada plate and my shrimp were ordered off the appetizer menu.  My cost 130 pesos.  It was delicious and plenty of food for lunch especially the day after Christmas. 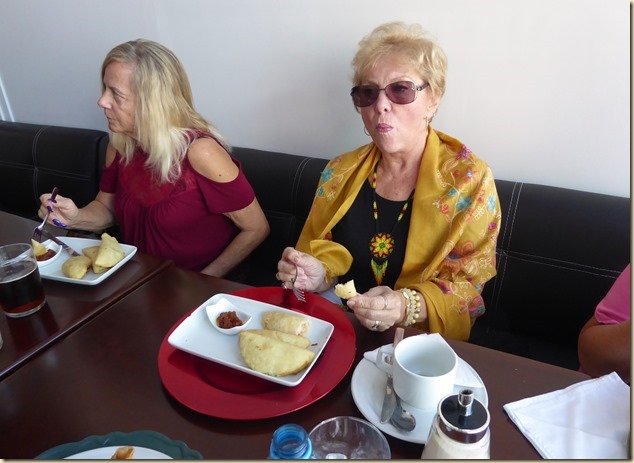 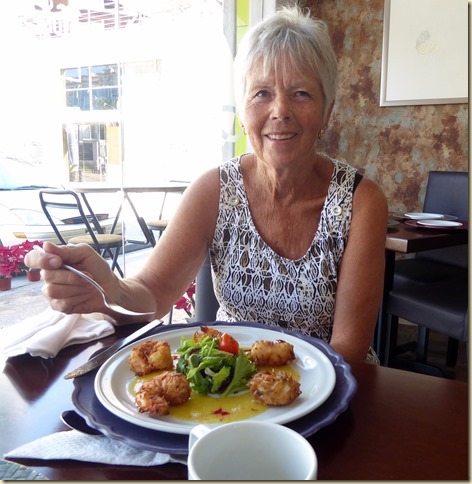 The shrimp were large and very tender.  Some of us also had coffee with our lunch including me.  I don’t drink coffee on a daily basis so I really enjoyed it.

Today we were a small group eating in a new restaurant and we all enjoyed the meal and setting.  The waitress was extremely professional, the service was good, the food was excellent and the prices were more than reasonable.  Thumbs up!

The waitress (owner?) said that business was getting better and better and that they have only been open a month or so.  Worth a stop for lunch or dinner and  I think I can talk Eric into a 5 minute walk for a meal one evening.