Happy hour with friends at Connie and Manny’s

Wednesday was a busy day for me.  First I was out for ladie’s lunch and then we were both out for happy hour.  Manny and Connie rent the top half of Bev’s house in El Cid for the winter and that’s where we were invited to. 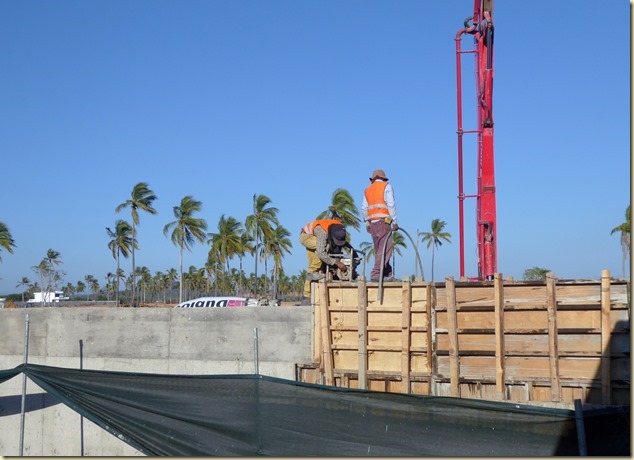 Dennis and Marilyn agreed to pick us up and take us with them as there isn’t much parking on the streets in El Cid and our truck is bigger than theirs.  While we were waiting the cement truck arrived and they started to pour.  You can see them balancing on the forms.   Something going on every day.

When we got to the El Cid gate (sorry no picture) it was a rigamarole to get in.  First you punch in the number on the intercom to contact the people you are visiting so they can buzz you in.  That didn’t work at all!  First we had the wrong number and then when we had the right number that didn’t seem to work either.  Finally we were waved to the next gate and the guy there took Dennis plate number, kept his driver’s license and gave us a little plastic thing for the dash.  Jeeps we are just a bunch of old people not criminals!  We wound our way in through the tiny streets and finally made it to our destination. 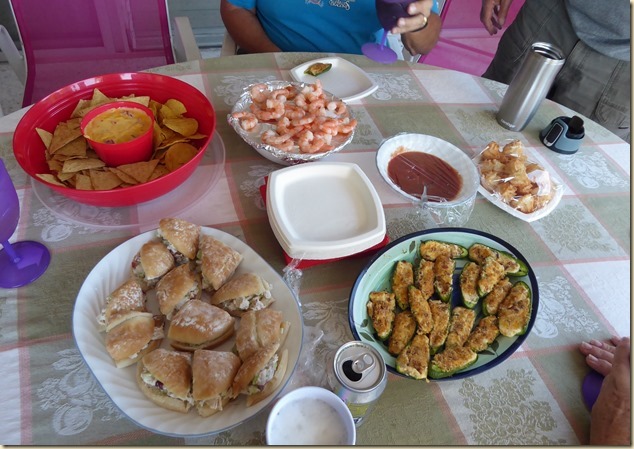 Connie put out some really nice snacks for us and the chips and dip are courtesy of Marilyn. 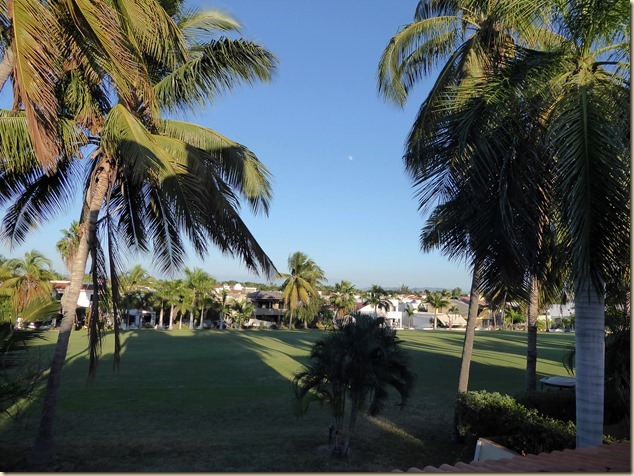 This is the view from the balcony of their unit.  It looks out over the golf course.  Seems tranquil but Connie says there are lots of barking dogs and parties now and then.  Nothing quiet in Mexico! 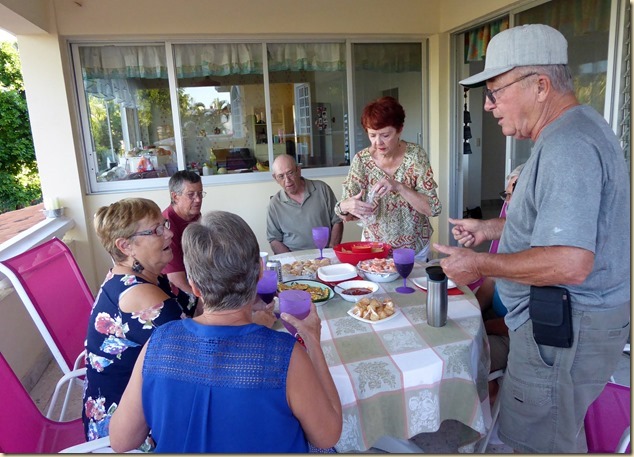 Frank and Sandi joined us. 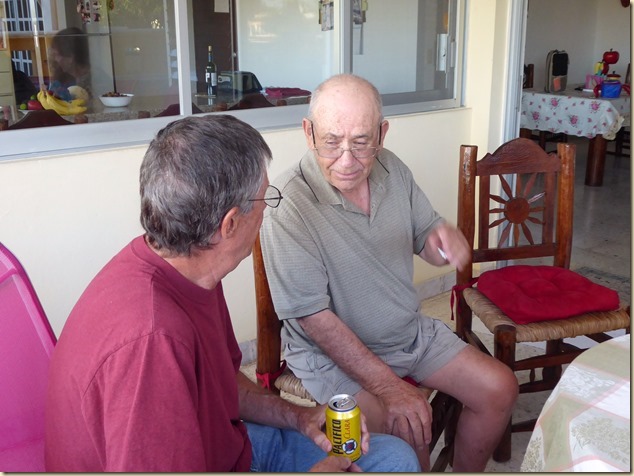 Eric and Manny having a blab. 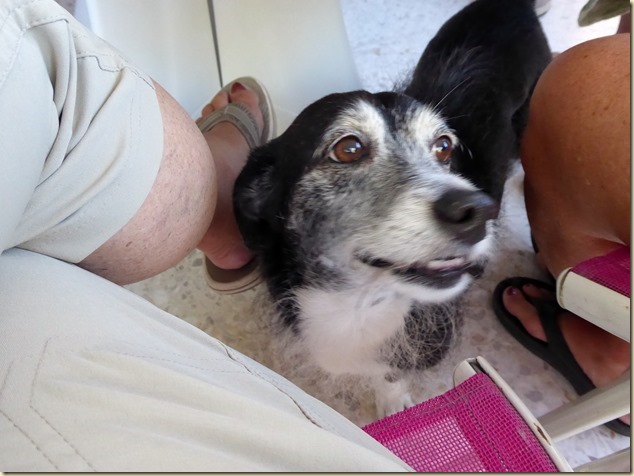 That is Ramona!  When Connie and Manny were in our RV park she used to drop by for a piece of cheese.  Not just any cheese….good Canadian cheddar!  Yes…I did bring her some tonight. She did manage to dance around on her back legs begging so she’s still in decent shape.   Quite a character!  A Mexican rescue as a puppy almost 11 years ago and she looks like a cross between a dachsund and a porcupine!  She likes nothing better than a nice spine rub which I do every time I see her. 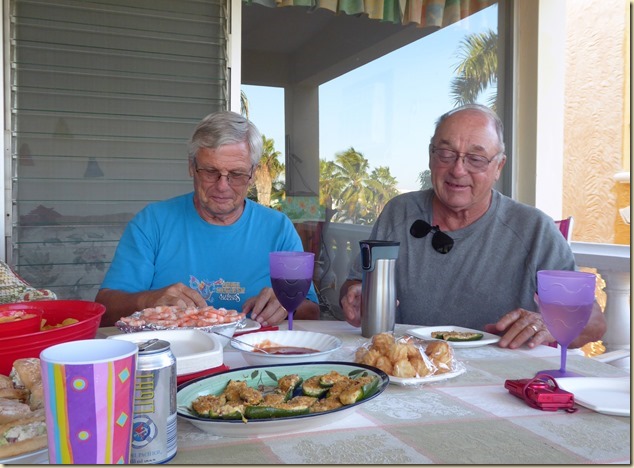 Frank and Dennis.  Dennis and Marilyn used to RV as well and now stay in a condo in Marina Gardens out by us.  (Connie/Manny,Frank/Sandi, and Dennis Marilyn and us) met 9 years ago in the parking lot of a gas station in Los Mochis and have remained friends ever since. 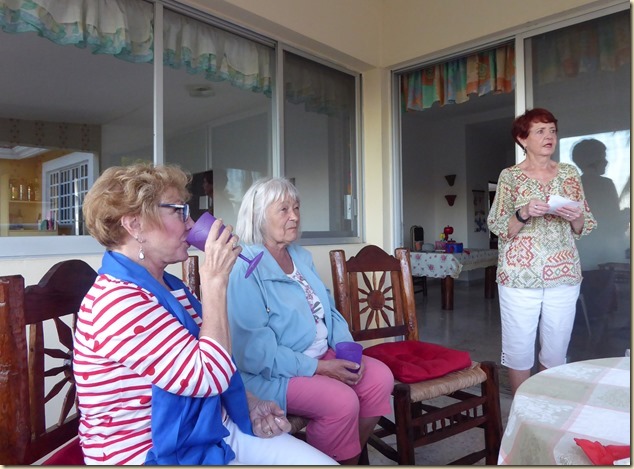 Ruth brought her husband Jimmy and also our mutual friend Eddie who is in the park.  Ruth and Jimmy rent a condo in the Cerritos resort. 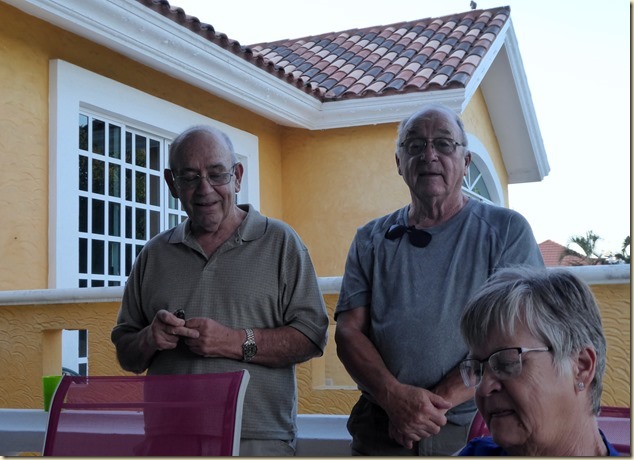 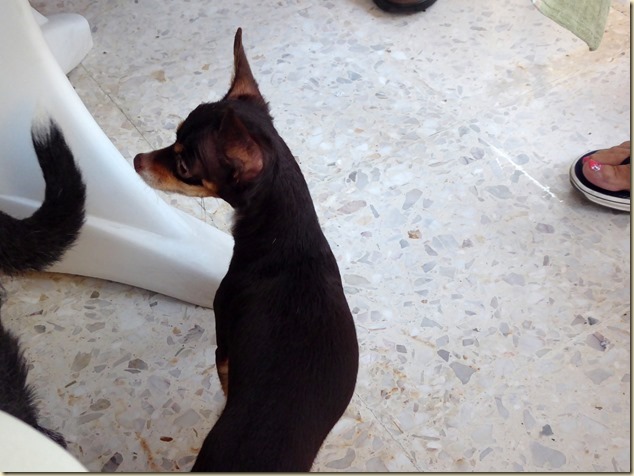 That’s Mitzi, Connie and Manny’s other dog.   She is a very tiny chihuahua that bounces around like a jack in the box.

We all laughed and talked till about 6:30 and then it was time to head home.  We caught a ride back with Frank and Sandi as they are in our RV park.

We all gabbed, had a few drinks, laughed and played Connie’s games until about 6:30 pm when it was time to head home.  Lots of fun! 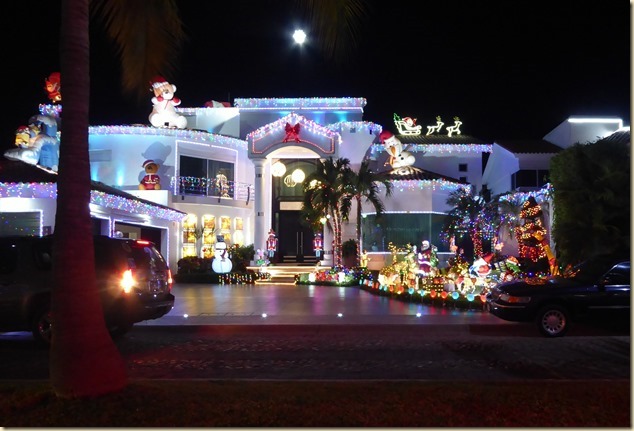 Frank took the scenic route out of the park down the street in El cid that has the most Christmas lights.  Have you ever seen anything like that?  These displays would be set up by professionals…not the Griswalds!! 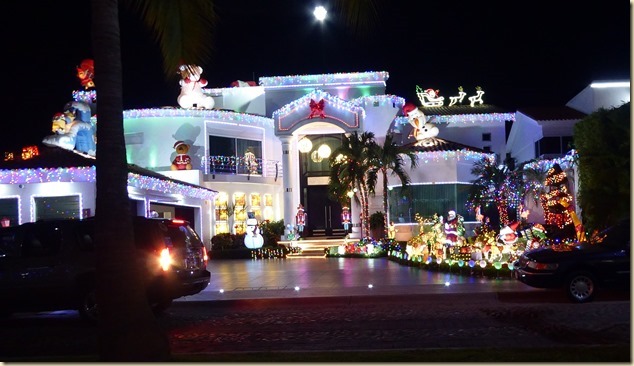 The cars are rolling by sight seeing all the lights. 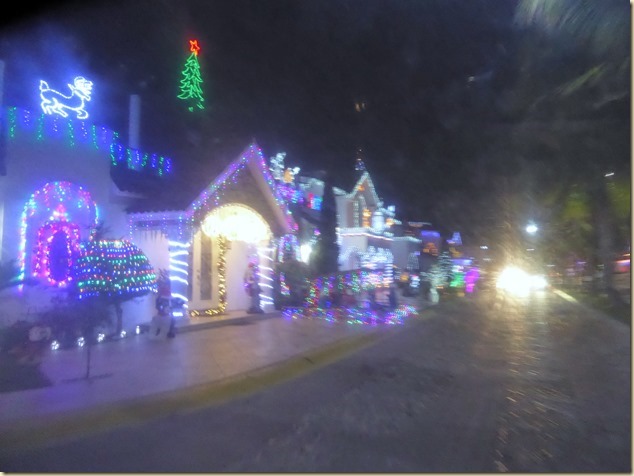 This is a terrible picture because I was in the back seat of the jeep and it has plastic windows.  But you get the idea of how many places are lit up.  Lots of money spent here.

It was a lovely happy hour with good friends.   Thanks Connie and Manny.