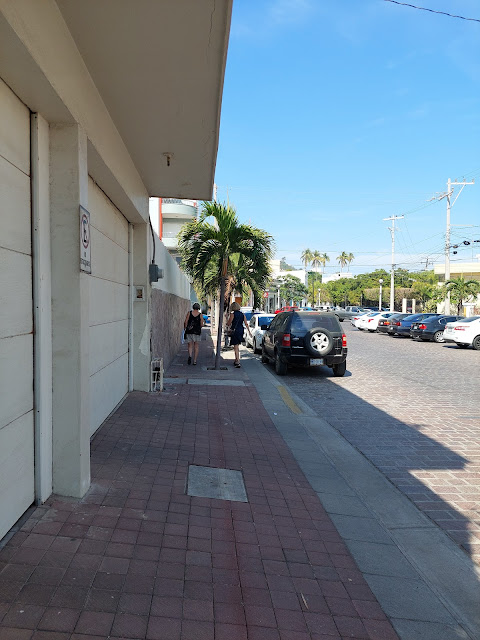 Heading up the street to Angelina's Kitchen which was Sandi's pick and unfortunately she was sick this week and couldn't come. 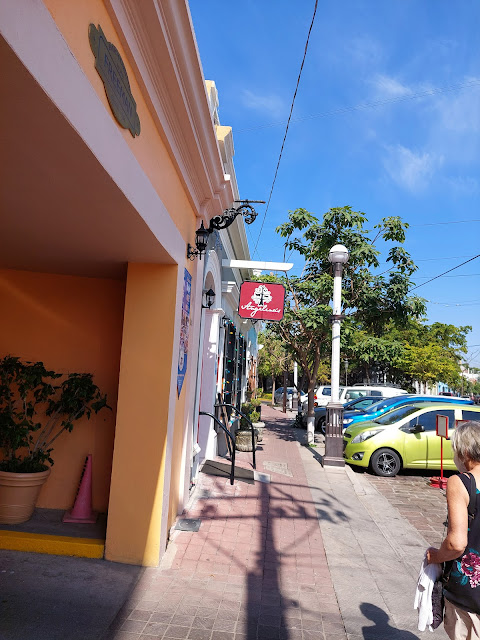 Cathy and I came with Pam in her car. 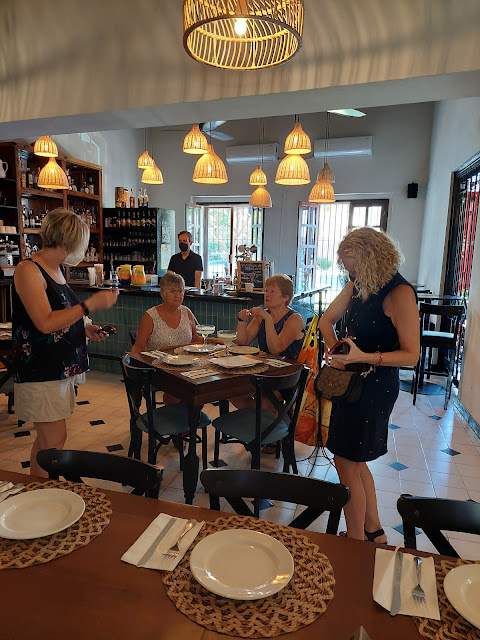 Marilyn and Marilyn took the bus and walked to the restaurant and they got here first! The last to arrive were the ladies in the Auriga or red truck. 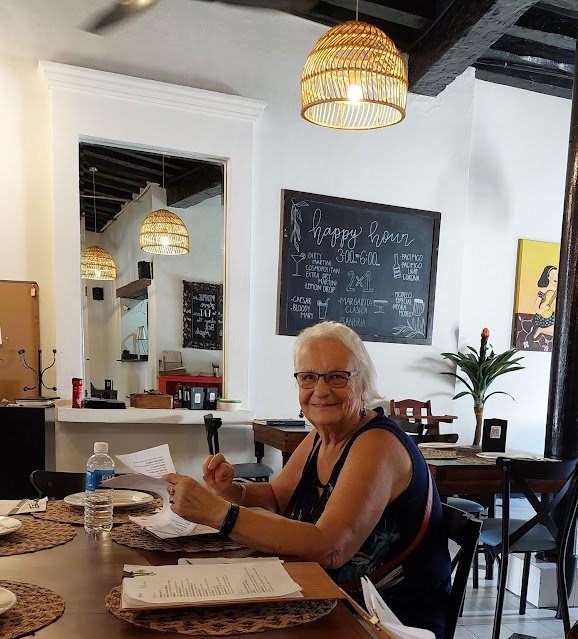 This is Marion's last lunch with us for now as she and Fred are heading home on Friday.  However if everything works out she and Fred intend to fly back to spend another month in Mazatlan at the Luna Palace.  They are long time RVing friends from the Las Jaibas RV park. 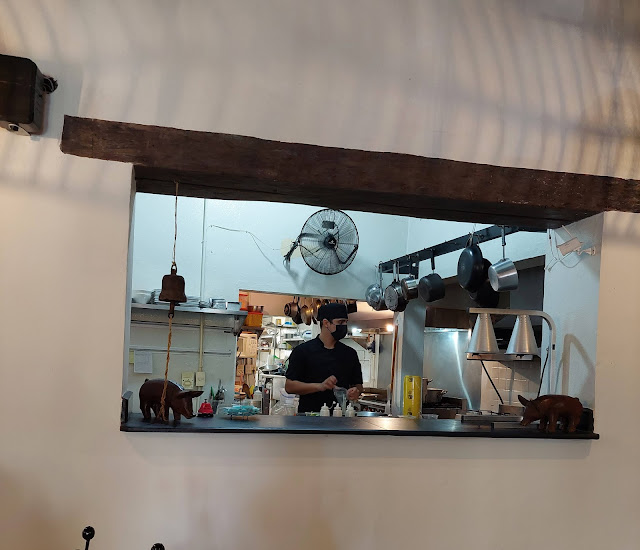 The kitchen  is wide open and you can see your food being prepared.  This is a very clean restaurant. 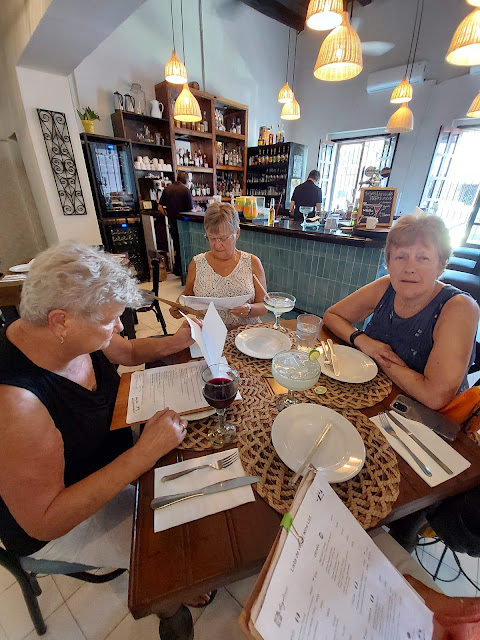 Jeannette is perusing the menu. 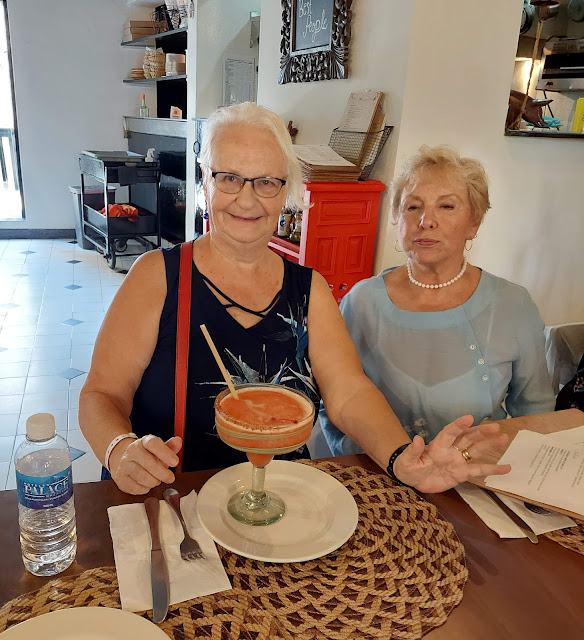 At bit of an odd look on Ruth's face as she snuggled up to Marion and her strawberry margarita! 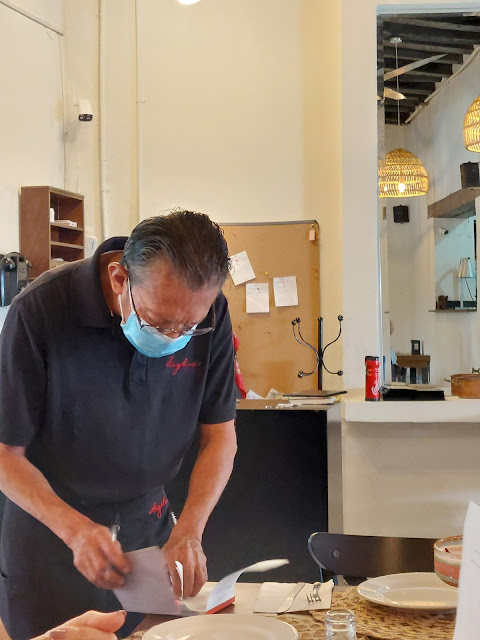 The waiter is very efficient, funny and speaks good English.  I asked him how long he'd been working here and he said 6 years.  If anyone remember "Fawlty Towers" with John Cleese this guy is a clone for Manuel on that series.  " My name is Manuel and I am from Barcelona!" Too funny. 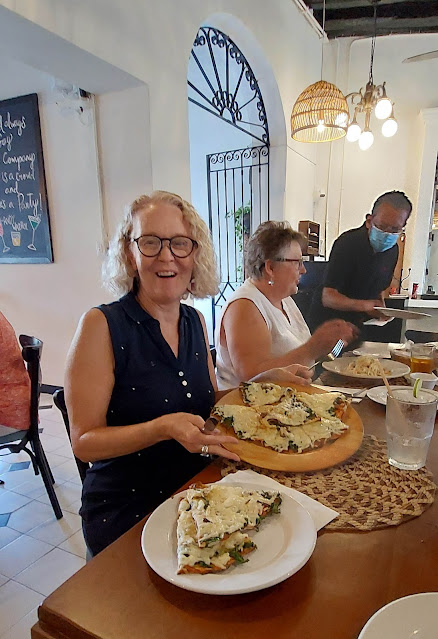 This is Pam's pizza and it is called a ....well it sounded like she said "Booby" but maybe it was actually Bugi...with spinach, mushrooms, pepperoni, goat cheese and caramelized onion...yum! 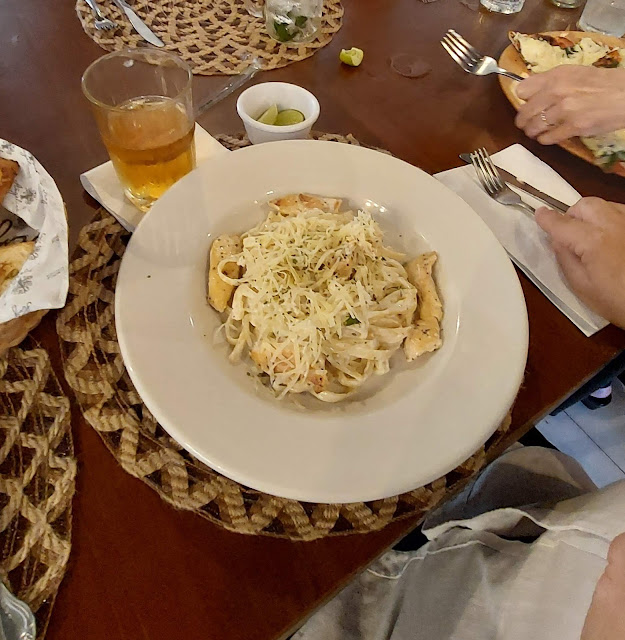 Christine had pasta Alfredo and she said it was delicious. 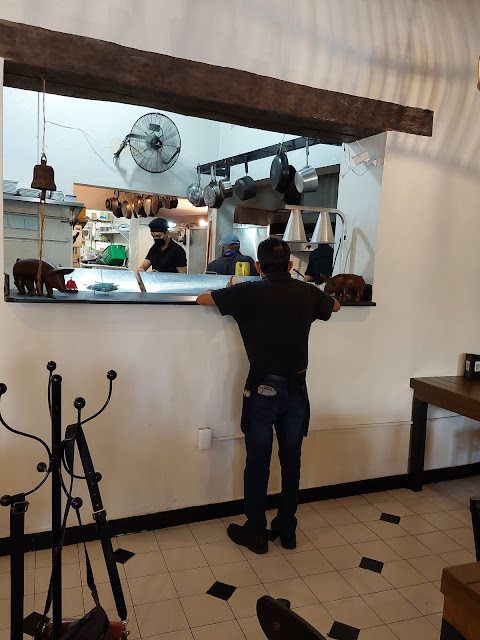 Well I don't know his name so let's call him Manuel over picking up our food. 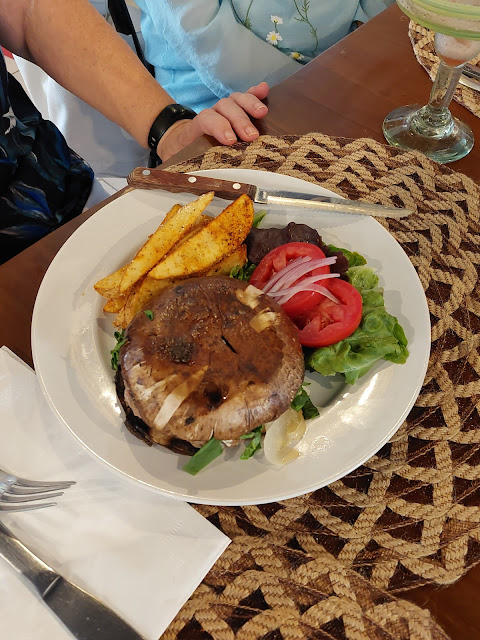 Marion had the Portobello burger with spinach, cheese, tomato and caramelized onion between two mushroom caps.  I almost ordered that! 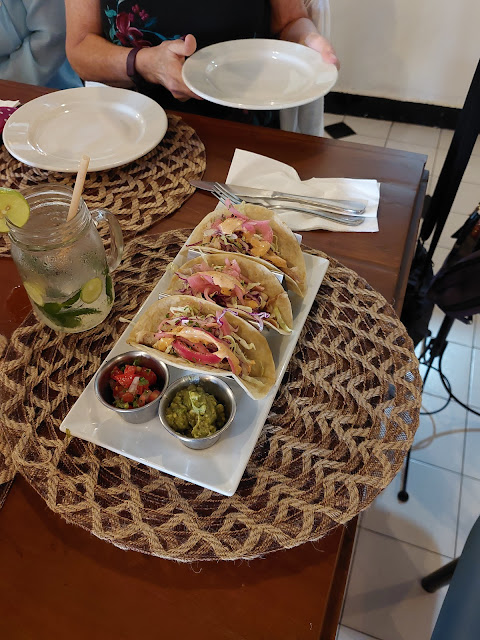 I had fish tacos and they were exceptionally good.  Pickled red onion on top and the fish was very tender...I ate all three!  My first Mojito to the left. 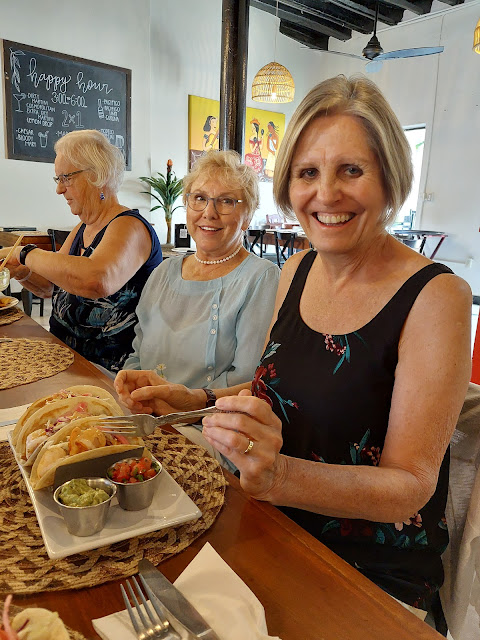 Cathy had shrimp tacos and she ate all of hers too! 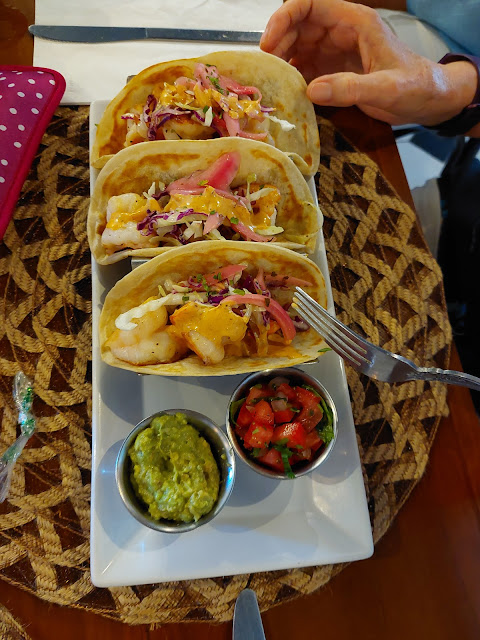 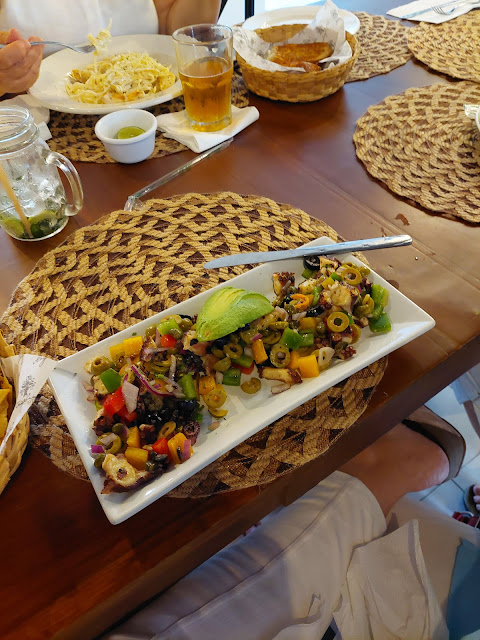 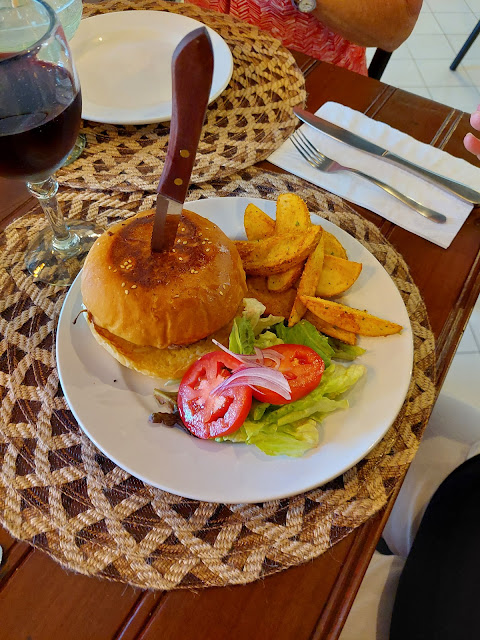 Jeannette had a burger that she said was slightly underdone so it was returned for a tune-up. 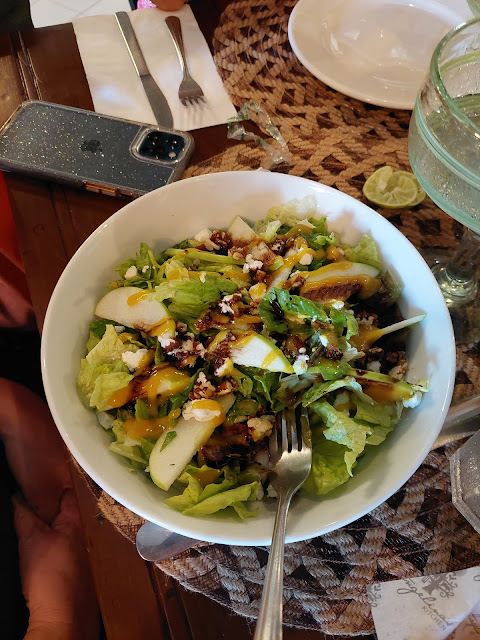 Marilyn had Manzana salad with apple, pecans, goat cheese, roasted tomato pesto with a honey mustard vinaigrette with bread on the side. 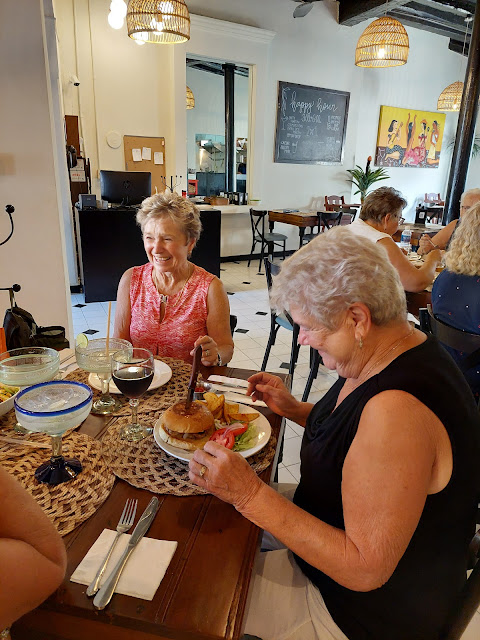 Is it done Jeannette? 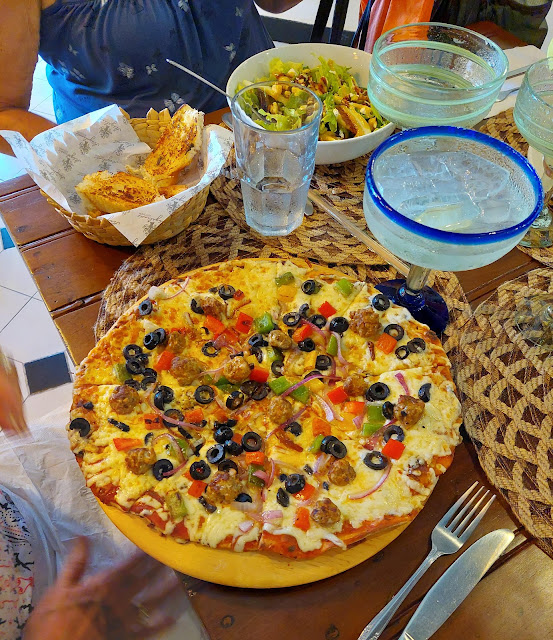 I believe Marilyn is having an Ay Mamita pizza with Italian sausage,bell pepper, red onion and black olives.  Of course half of that went home with her! 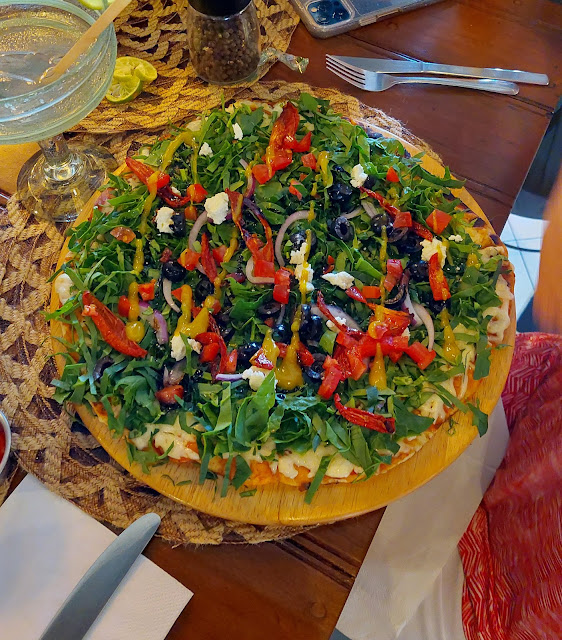 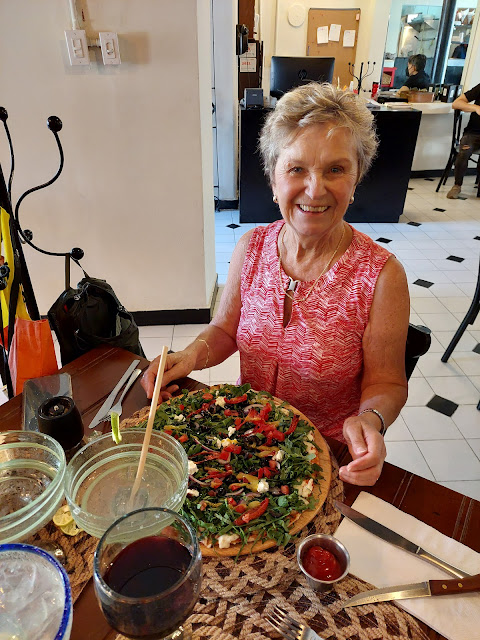 Lots of different drinks were served too and I almost forgot to take a picture of my first ever Mojito which I really liked.  Ruth orders them so I thought I'd try one and...I'll order one again. 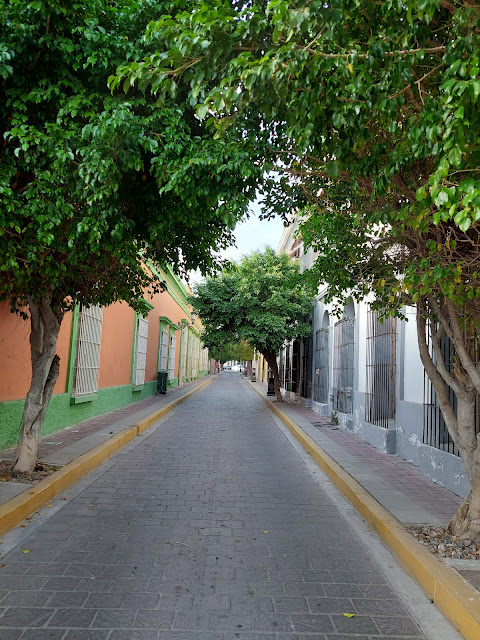 When lunch was done everyone went their own way.  Some went home with Pam in her car and the rest of us wandered back up town to shop and catch the bus home. 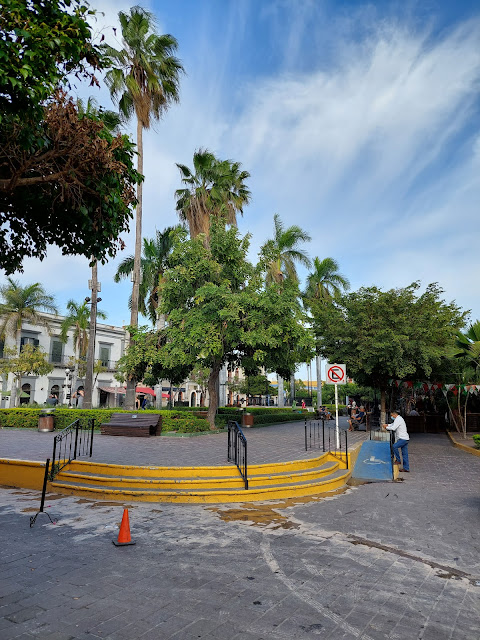 Coming through the Plaza Machado for the first time this year.  Now that Christmas is over it is much quieter and I'll have to come downtown for another wander. 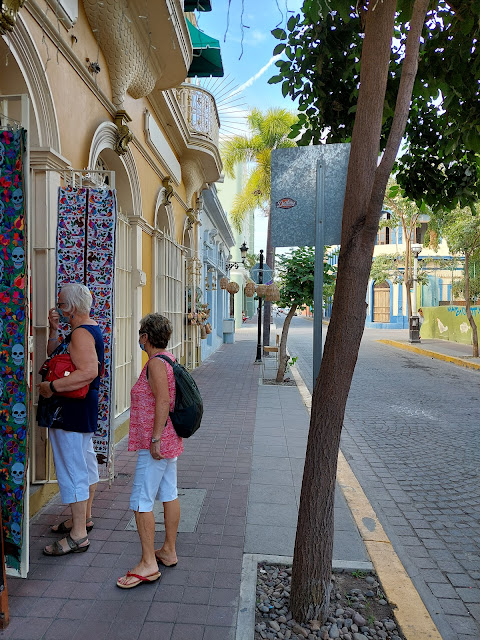 Marion and Linda having a peek inside a restaurant....Allegro I think. 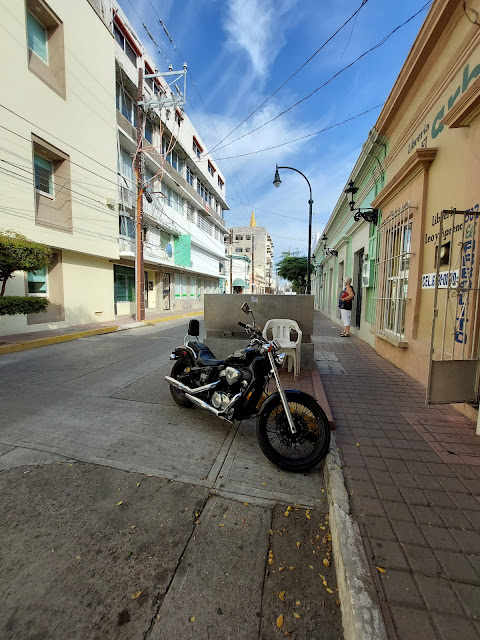 As Eric didn't get to bring his motorcycle I took this picture for him.  Wrong color and make but it is a motorcycle!
So...as usual Angelina's Kitchen was top notch and everyone had a very good meal and a good time.  Worth a visit any day of the week.  Open from 12 noon to 11pm.

Lovely lunch. Everything looks so tasty. Sadly we won't be going to any restaurants this winter.