Ladies Lunch at Poncho's on the beach. Friday Nov.22

Friday was an odd day for us as …to start with the maid was late.  Apparently 9am means 9:40 for her and now that it’s happened twice we’ll just roll with it.  We had decided to go out shopping while she was cleaning the house and I needed to be back at around 11:30 so I could head out on the bus for lunch with the ladies. Things didn’t quite work out that way as we got a late start and in the end Eric ended up driving me into the Golden Zone so I could make it. 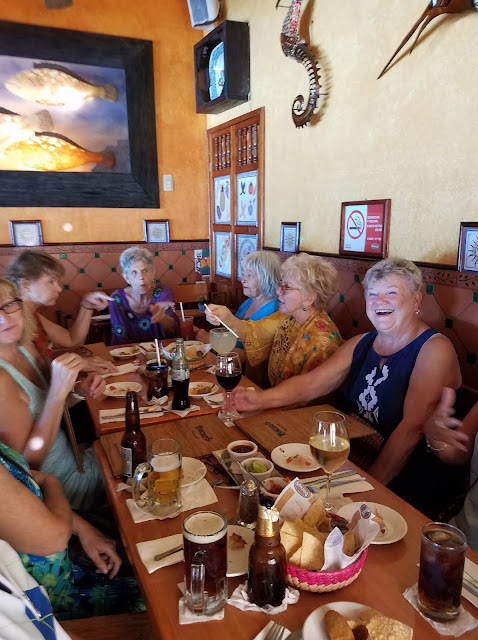 When I arrived late the party was in full swing.  Drinks and appies were on the table and the first thing I did was order beer! 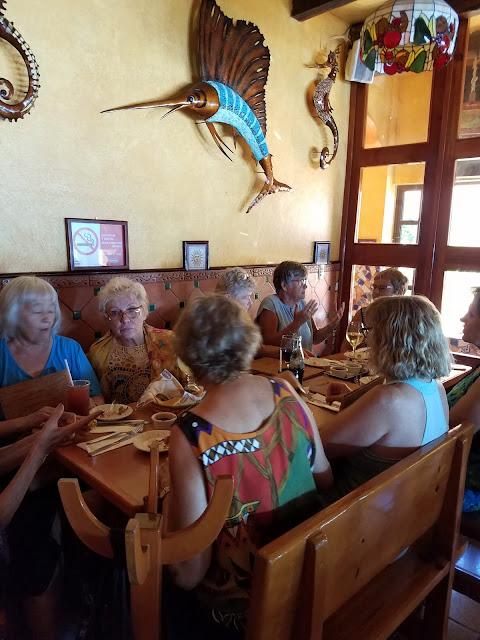 Lots of chat as we had a few people who had just arrived as well as ladies who sometimes join us for lunch.  The table was crowded but they squeezed me in.  After all….I do blog them every week! 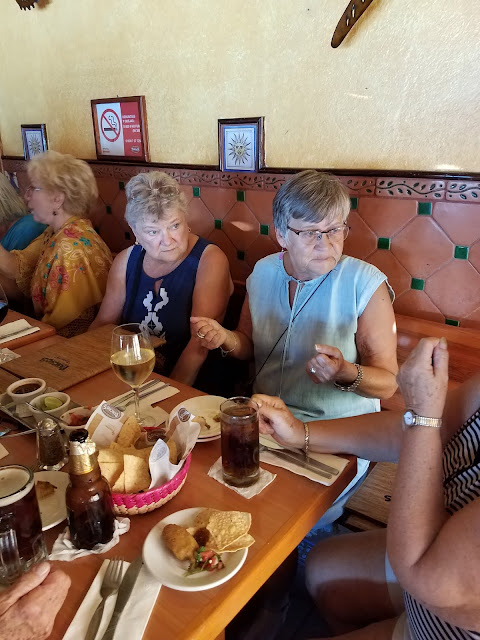 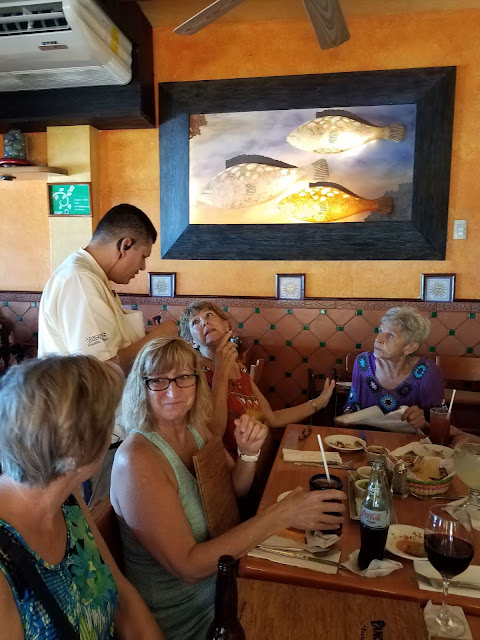 The waiter is taking the orders for food. 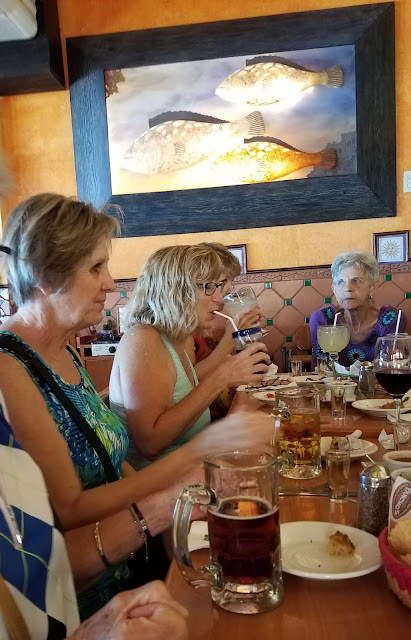 Everyone has a drink except me but….it showed up soon. 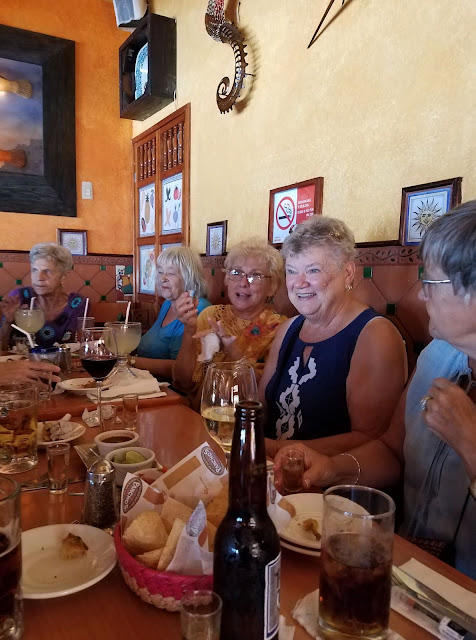 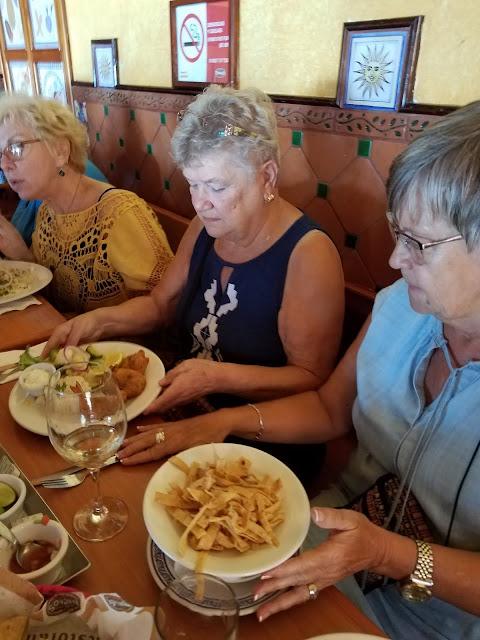 Food arriving already.  Marilyn has tortilla soup and I can see Jeannette has breaded shrimp. 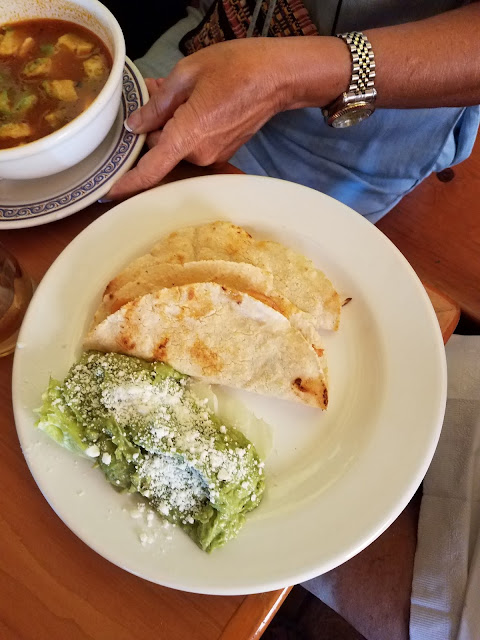 Sandi has taco’s with a lot of guacamole. 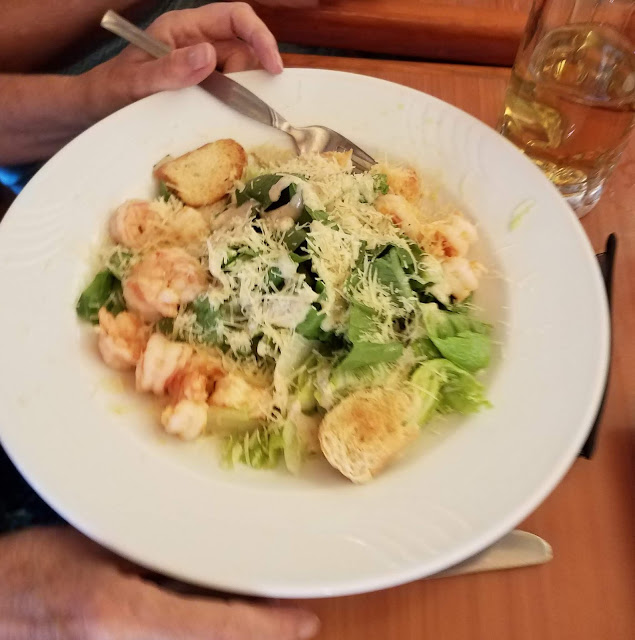 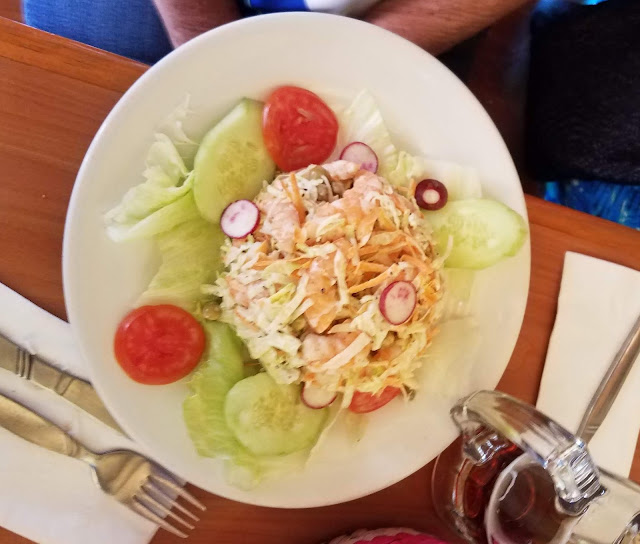 Susie’s avocado shrimp salad.  I usually order this but today I branched out. 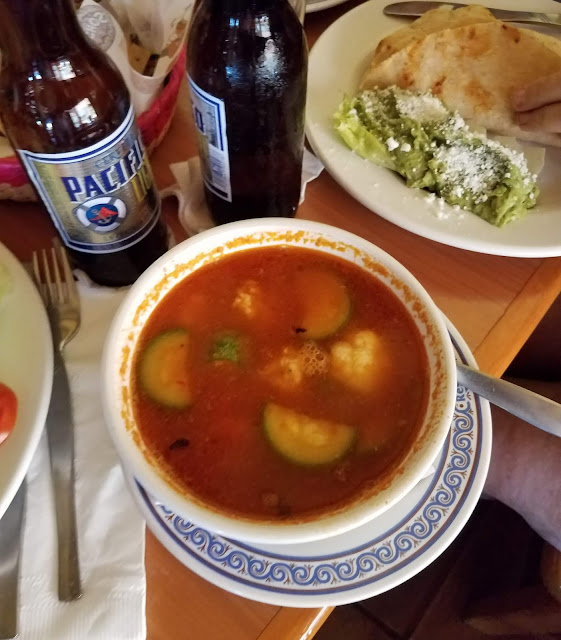 I had shrimp meatball soup and it was pretty good. 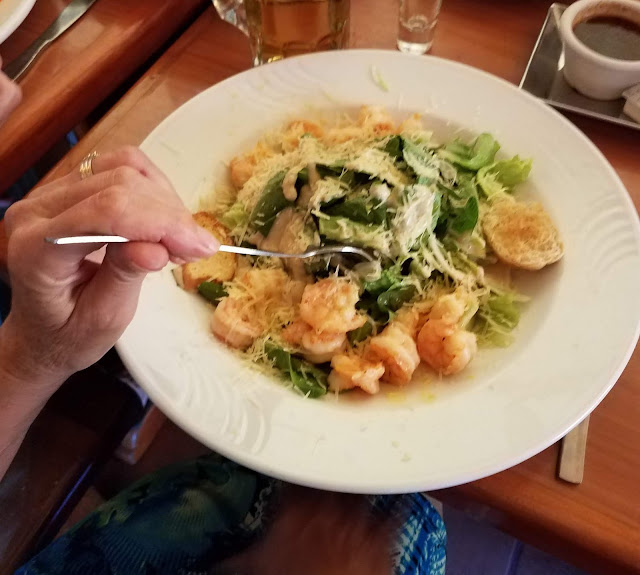 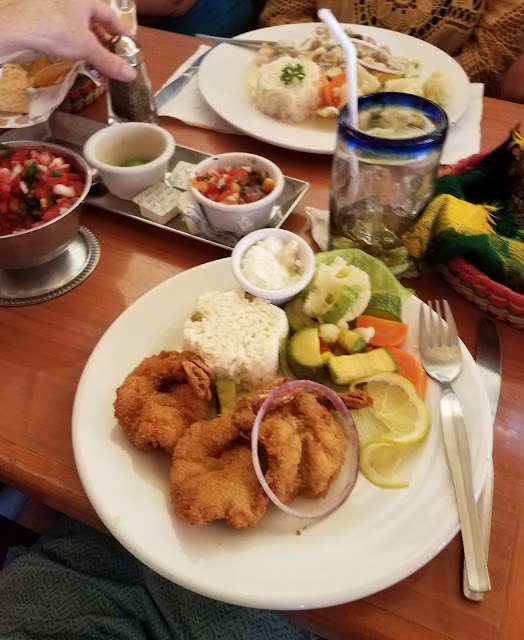 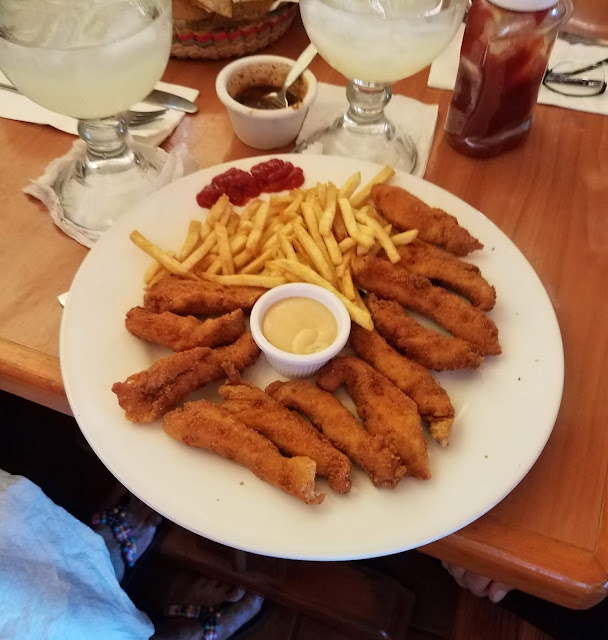 Lillian and one of her friends ordered chicken fingers and fries which I find a bit odd when there is such a varied menu but…each to there own. 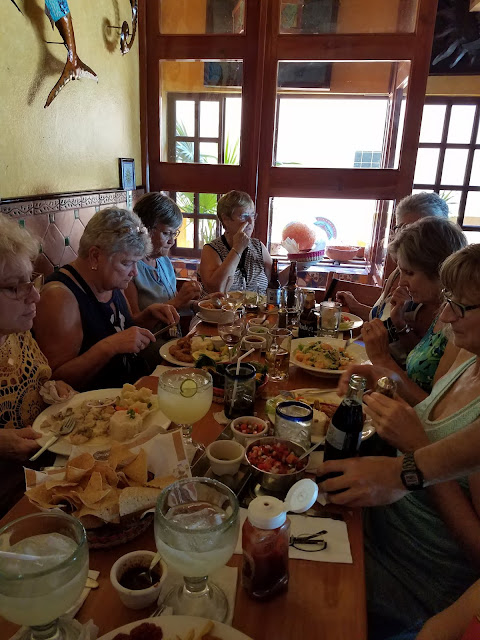 It quieted down a bit at this point as the ladies started to eat.  We’d already been given the free appies like marlin stuffed jalepenos and chips and salsa.  And….don’t forget the shots of a fruity tequilia. 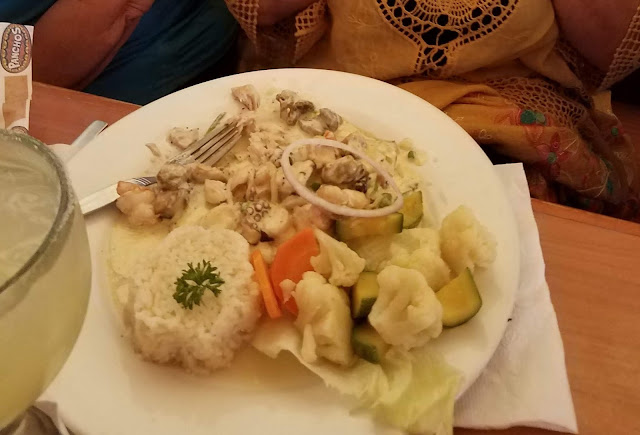 Ruth ordered a plate with a seafood mixture.  I’m sure some of that is octopus.  She always tries to pick something different which is kind of how I like to do it too.  Unless…it’s something I really love that I keep going back to. 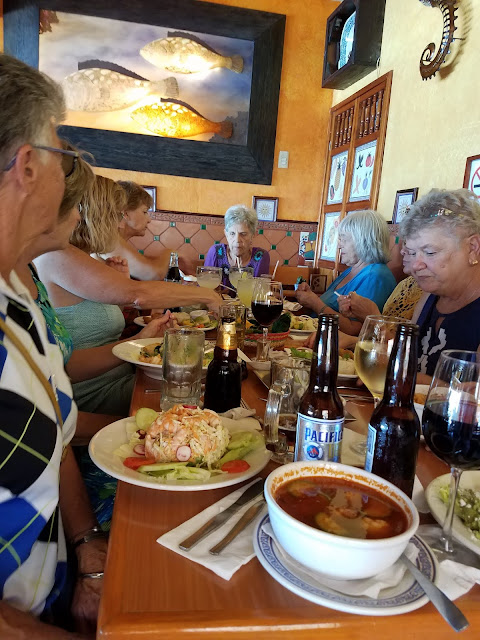 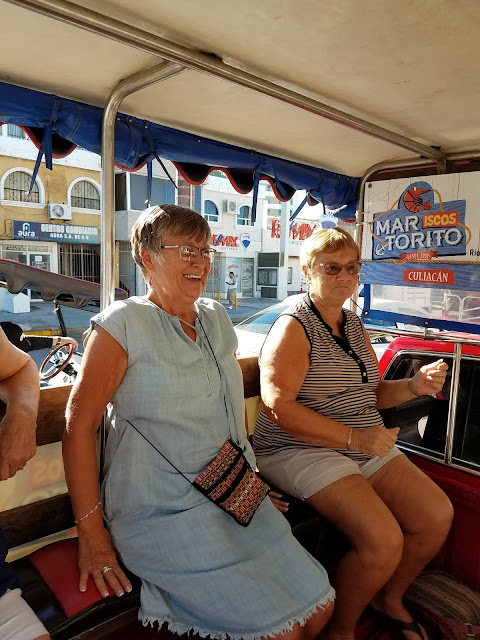 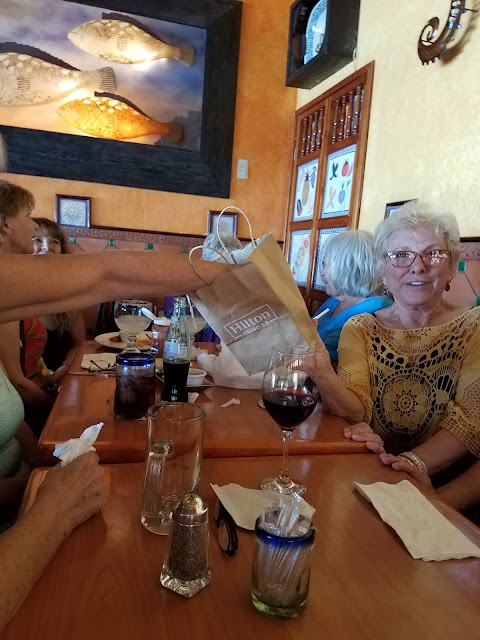 Time to draw for next week’s lunch.  Everyone writes down  their choices of a restaurant and then…someone draws. 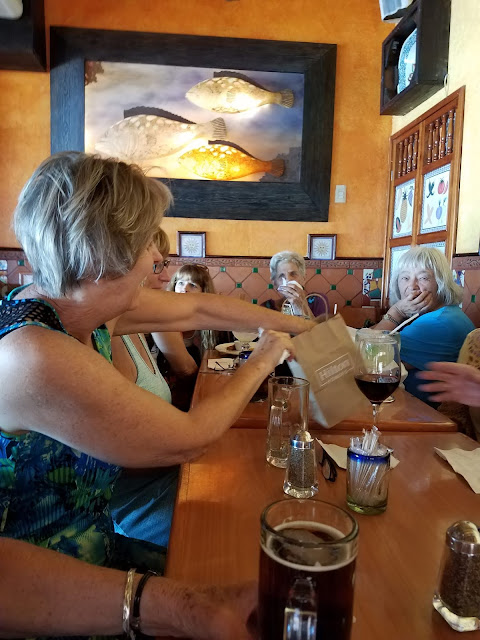 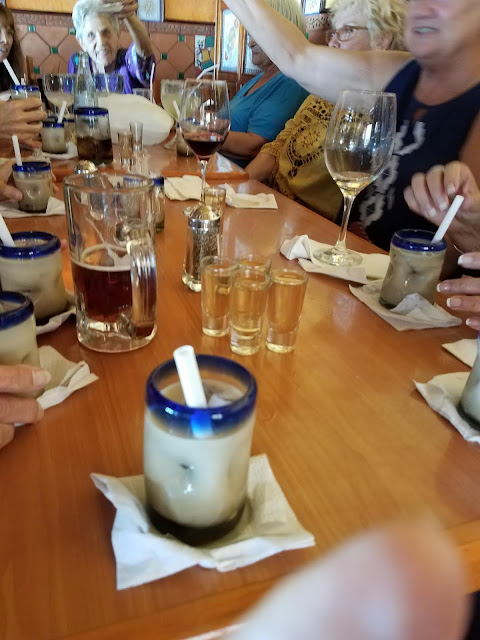 So…the meal is finished and they bring either kahlua and cream for dessert.  Plus…more shots of tequila which no one drank, well…almost no one!  And ….it got really loud again.  I think we drove some people out of the restaurant who were close to us.  Hard to have a quiet lunch in a concrete building with a bunch like ours. 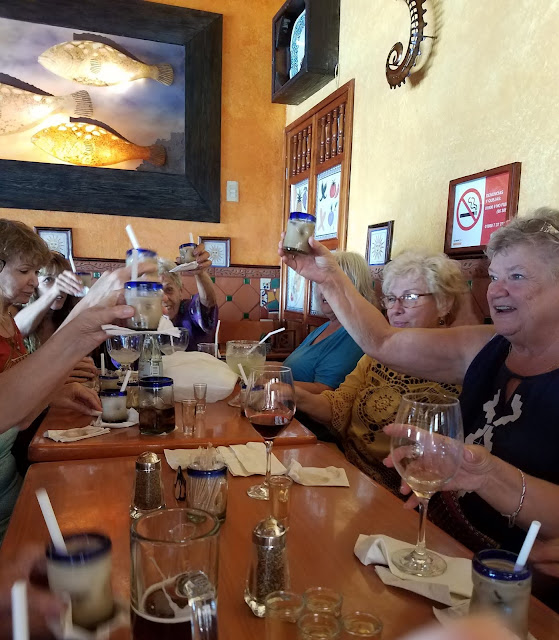 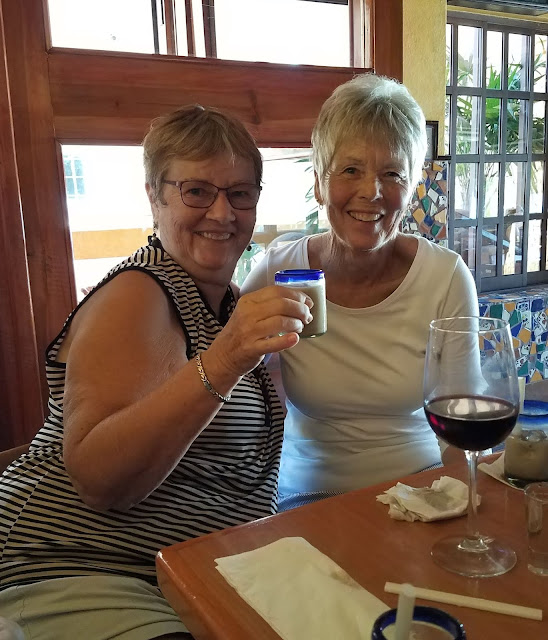 Sandi and I having a laugh together. 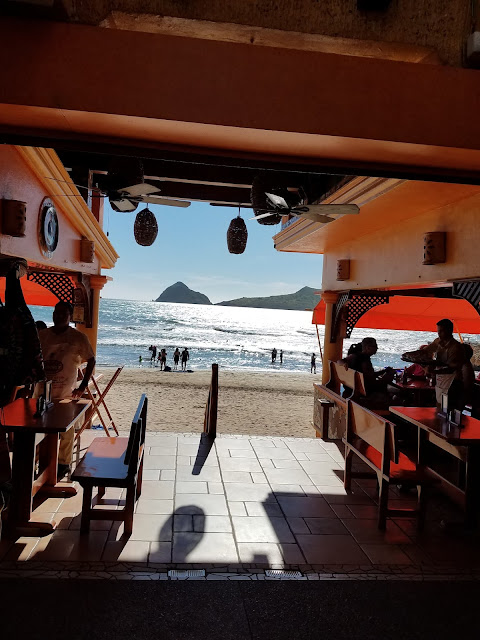 By this time I’d had enough and left the group behind to head up to Michael’s to have a look.  This is a store that sells, jewellry, furniture, art, glass etc. etc.   This photo looks out the end of the restaurant onto the beach.  A lovely venue and a staff at Poncho’s that always keeps you happy.

I was walking back to catch the bus and I saw some of the ladies getting into a red truck on the other side of the busy road.  No problem…I yelled “ Alto” and the driver jumped out and stopped traffic so I could get into the truck.  Only in Mexico! 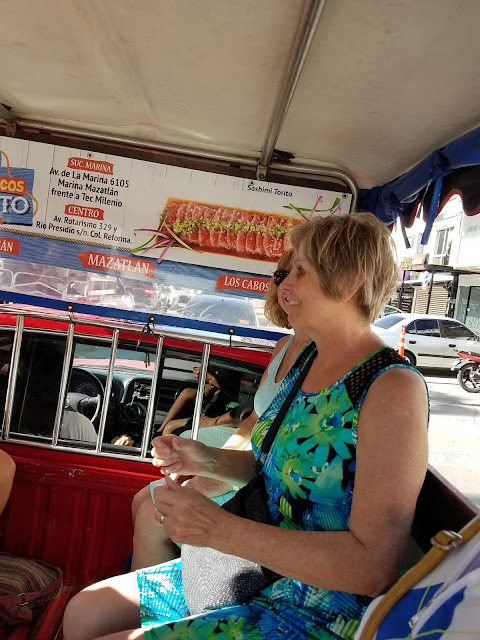 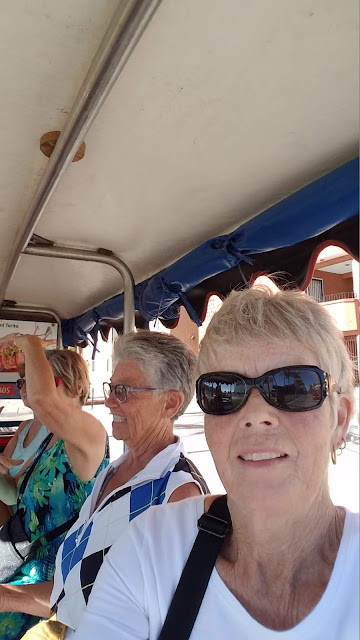 The tunes were blasting, the ladies were singing Macarena and everyone was happy.  Some of the die hards were still back at the restaurant but this group was ready to head home.  The photo of me is my attempt at a selfie.
It was a good lunch as it always is at Poncho’s,  everyone was happy and fed and next week we’ll do it all again.
When I got off the bus at Marina Gardens to head home Cathy and Marilyn got off too as they are in the condos right next door.  I asked if they wanted to come in and see the house and they did.  We haven’t had any company yet as we’ve been busy getting everything in order so they were happy to have a look see.  They both thought it was very nice.  I should also mention that it was Eric’s 73d birthday.  He said “ who needs another birthday” but the alternative isn’t that great.  He got KD for dinner which is his favorite.  Only thing missing was weiners but with no RV fridge I couldn’t bring any.

Mmmm Kaluhua and cream My favourite! Yes and I c Two beers Good for you!

Looks like everything is already in full swing! We'll need to try that restaurant next time we're in town. SLDS

Oh no........ I missed lunch at Ponchos.😢 I guess I’ll have to drag someone there with me. Looks like lots of fun. And all that shrimp makes me salivate!

Love eating at Pocho's but somehow your group make it more fun.