Tidying up the fields and flowers in bloom. 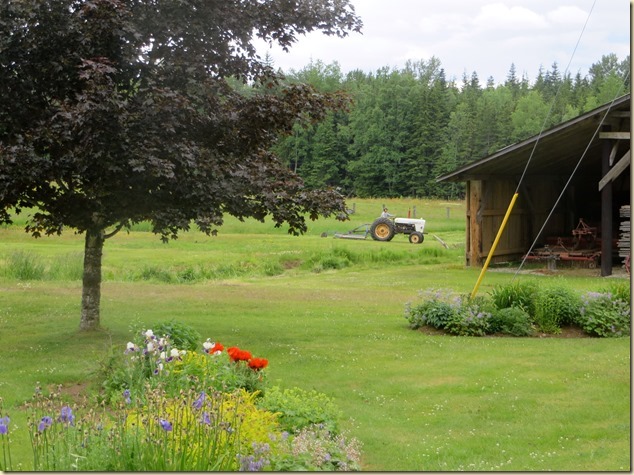 Up until about 2010 we were still cutting hay on the farm.  Now that we no longer do that Eric goes out with the brush mower pulled by his 1963, 55hp David Brown tractor.  We’ve had this tractor since 1978 and it came with a rebuilt engine and new clutches and then Eric put new tires on it after he stripped it down and painted it.   When he got the tractor Eric got rid of the lousy generator charging system and put a GMC alternator on it and it’s been great ever since.  The only repair necessary has been a bebuild of the fuel injector pump.  It has done almost all of the work on the place over the years, plowing, discing, haying, brush mowing, fertilizer spreading and snowblowing the road into the farm and it still runs like a champ! 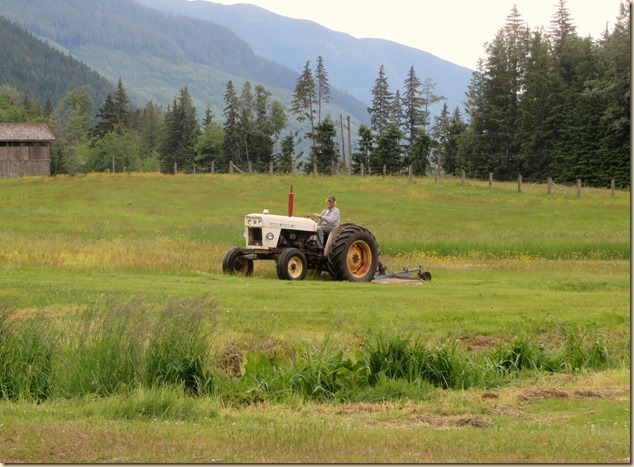 Isn’t it cute!  Later on we bought the Kubota which meant that Eric had a cab when he was blowing snow in the winter.

While Eric is mowing the fields to tidy them up I’m on our 20 year old 20hp Craftsman riding lawnmower tidying up the yard.  Needless to say Eric is meticulous about maintenance so most of our equipment has never been replaced. 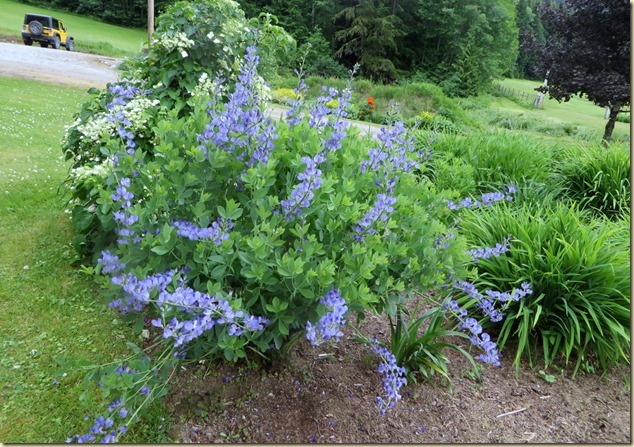 Baptisia….tall with blue sweet pea like flowers that later become huge pods.  Not a plant that you would see very often. 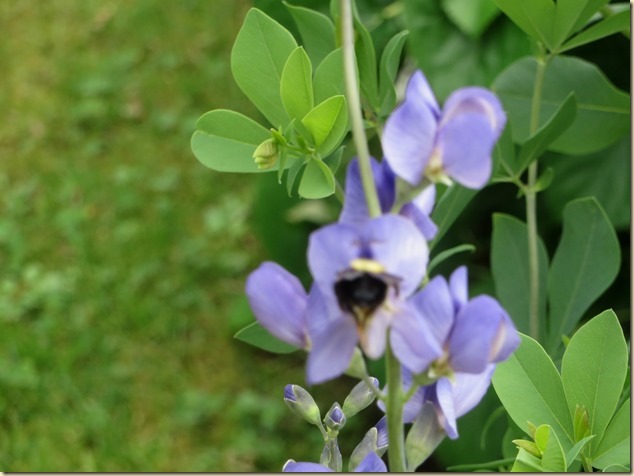 A bit blurry but you can see how much the bumble bees love it. 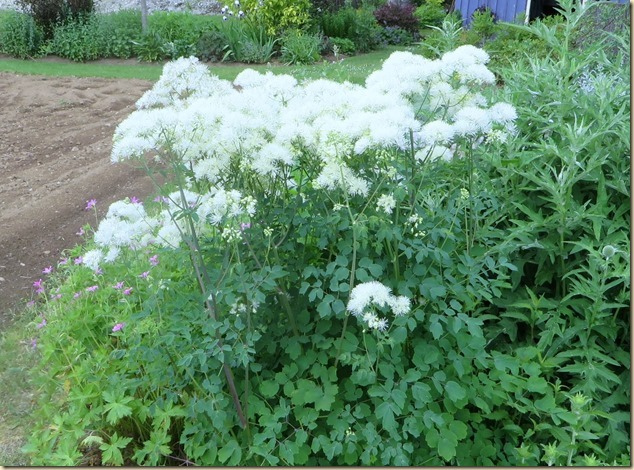 Thalictrum…or Meadow Rue. Tall and it’s blooms are like a floating cotton candy puff …I have it all over the yard …even in pink.  I do have to make sure I dead head it after blooming as it’s voracious self seeder. 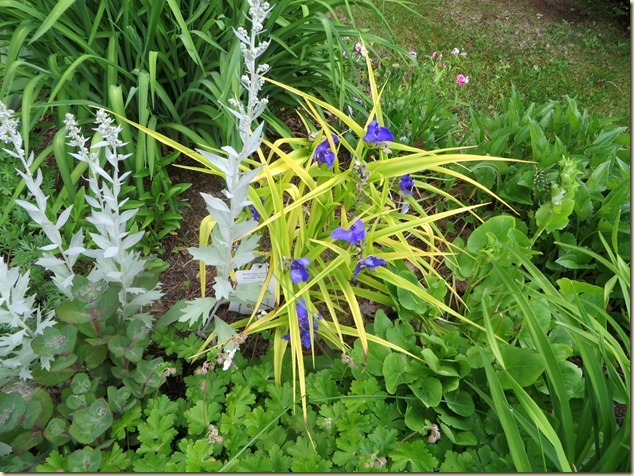 Tradescantia or Spiderwort in it’s yellow form.  Looks lovely with it’s blue flowers.  When I started flower gardening over thirty years ago (vegetables came first!) I found that I needed to learn the Latin names of plants.  I wanted to own every plant I could find and the only way to differentiate between them was by their Latin names. So…I wish I’d learned Spanish for my travels to Mexico but I also wish I’d taken Latin for my gardening addiction!  French has been of absolutely no use to me at all.  As time has passed my love of “ all “ plants has waned and my criteria for a plant to warrant space in my garden has tightened up.  Thugs are slowly being eliminated!  If a plant spreads too fast or self seeds all over the place I dig it up and toss it into the pit that Eric dug for me with the back hoe.  That way he can cover up the pit (so the plants don’t spread) and dig me a new one.    Some self seeders and spreaders are tolerated if they are exceptional and manageable such as Thalictrum and Alchemilla Mollis or Lady’s mantle. 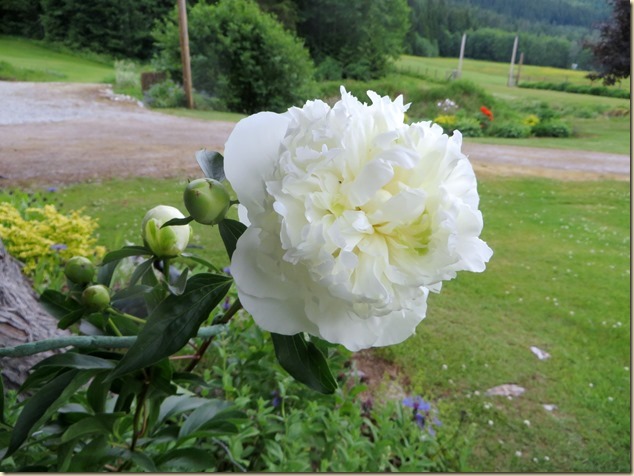 A lovely old white variety of peony that used to bloom beside the house where I grew up in Burnaby.  After my mother passed away at the young age of 58 I dug it up and brought it to Terrace to bloom in my garden.  I believe it is called Maxima and it has a lovely scent and is tough as nails.  Plus…it reminds me of my mother.  Funny enough it came with some red and yellow tulips around it and they never died out. 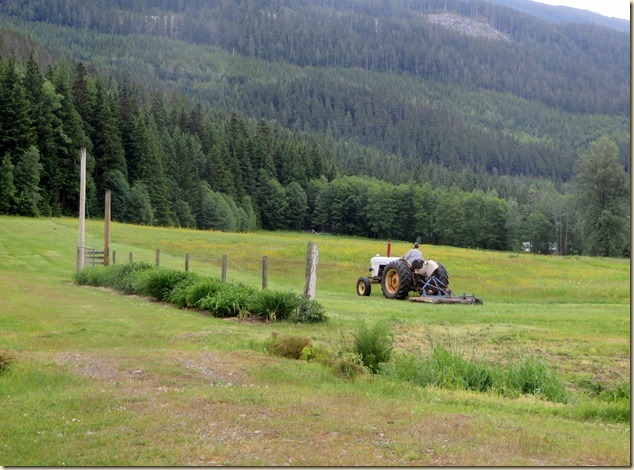 It will take Eric days to mow all the fields but it will look neat and tidy when he’s done.  It takes all of our effort to keep the place groomed, brushed and weeded to look it’s best.  To Eric’s left is my large day lily border that will bloom in mid summer. 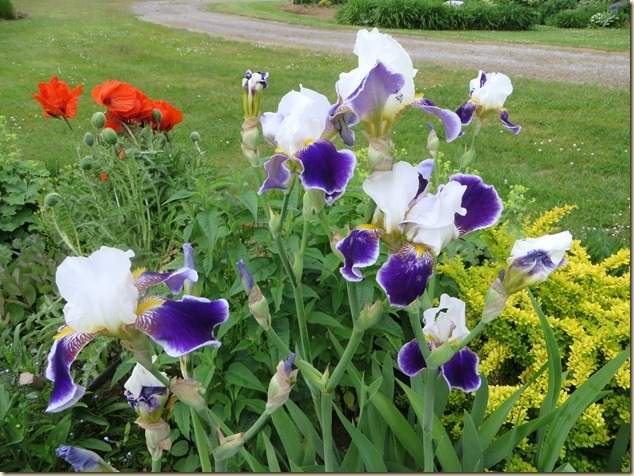 The bearded iris’s are blooming next to the poppies.  I’m not fond of orange in the garden but it looks nice next to the purple iris’s.

Another snippet of the Tycho’s summer life in Terrace!