First Sunday Concert at the Angela Peralta...Best of Bach.


Sunday was our first Camerata Campbell concert of the season at the Angela Peralta theatre. 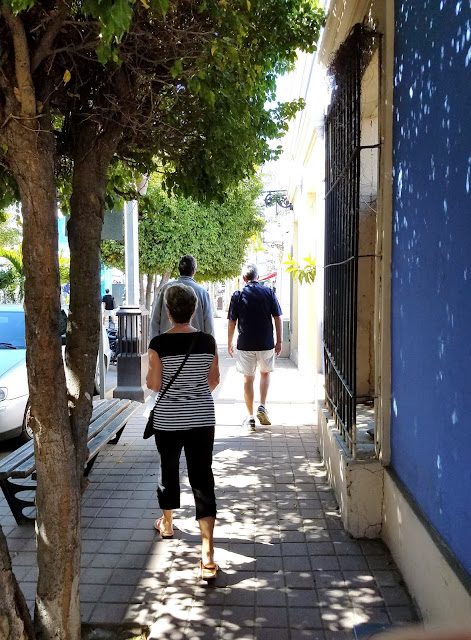 Ian and Linda had decided to attend as well and funny enough we ended up on the same bus heading downtown.    Here we are walking down Constitucion towards the Plazuela Machado and the Angela Peralta. 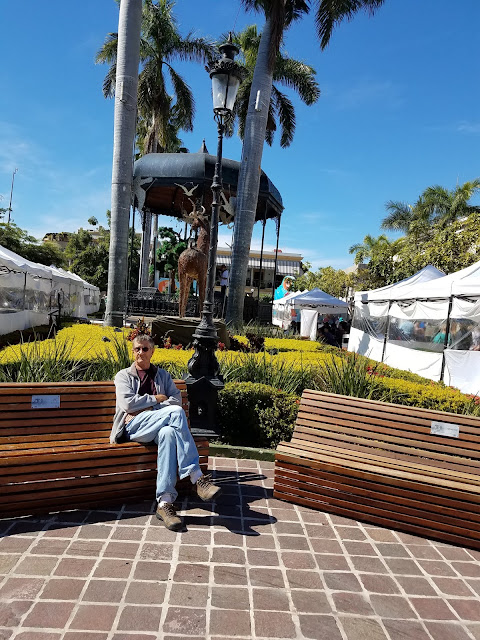 The A/C had been cranked on the bus so we both sat in the sun to warm up before heading into the theatre.  The A/C in the Angela Peralta is not reliable so we are always have a jacket with us in case we get chilled. 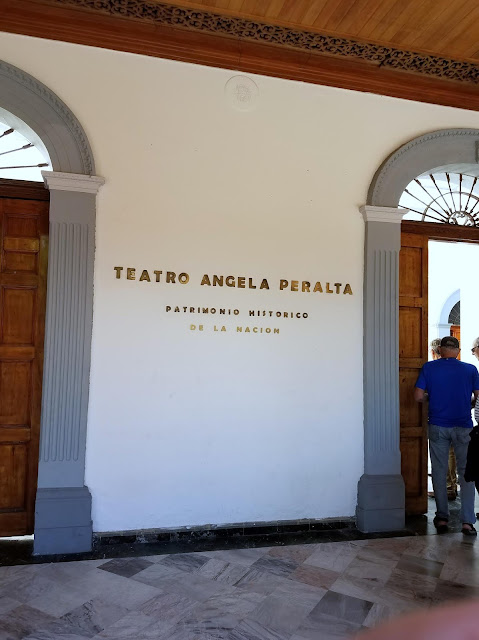 We'll attend most of the concerts from now to the middle of March.  There are a couple of Sundays in February when Carnival is happening and they don't have the concerts due to the scheduled events that may cause a conflict and so they extend into March.  Fine by us! 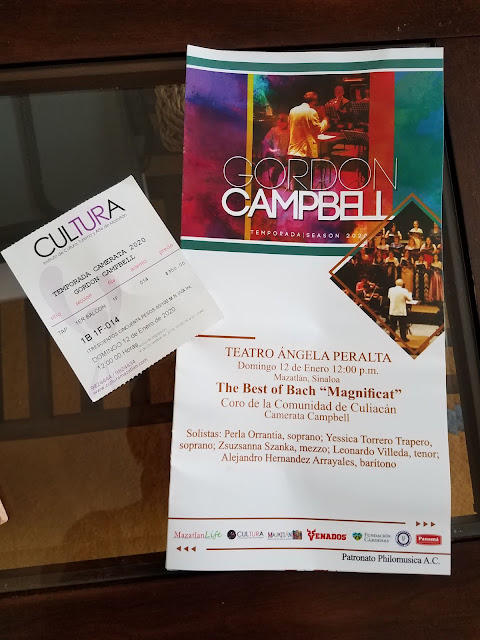 Sunday's concert.  It was composed of the Camerata Campbell orchestra and the Culiacan choir along with five featured soloists.  As I am not a music aficianado I will not try to explain the concert other than to identify the soloists!  Eric is much more in tune with classical music and the instruments than I am. 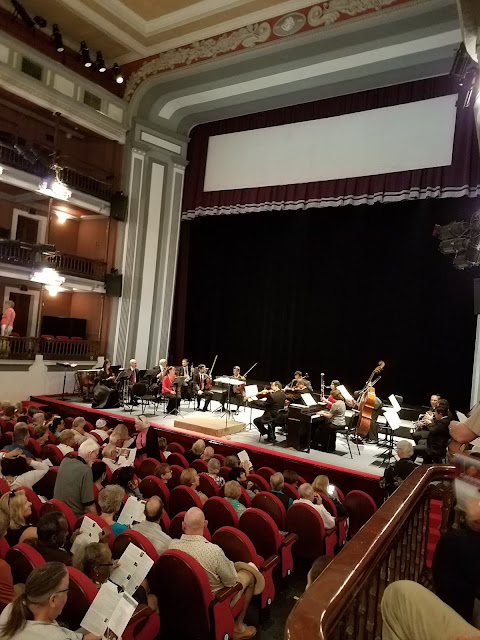 We are seated in the first balcony in seats 13 and 14 this year.  Ian and Linda didn't want to sit on the main floor either (too many big heads and big hair!) so they sat on the balcony as well.  Not much choice when they bought tickets so they are in seat 1 and 2. 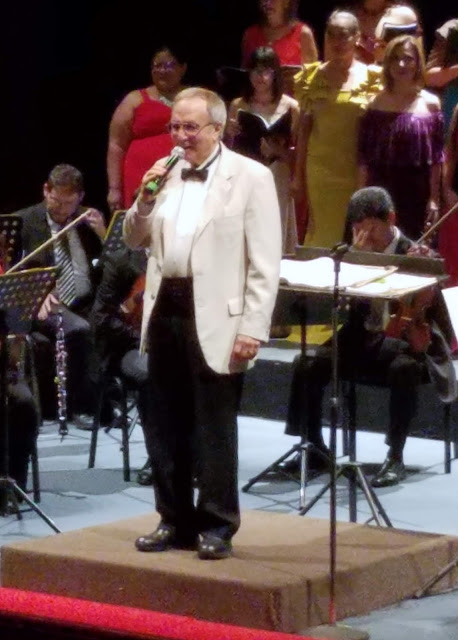 Gordon greets us and explains today's performance.  These concerts are his baby and it makes him really happy to see so many people in attendance.  It's an expensive venture to put the program together so the more people who attend, the better the revenue.   350 pesos or about $25.00 Canadian per ticket.  A bargain in our minds. 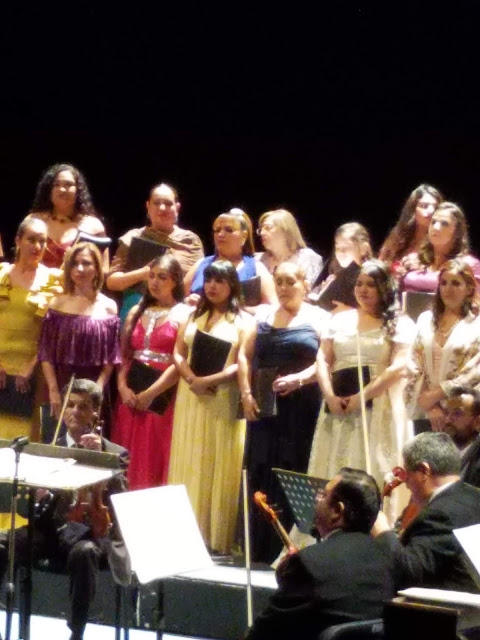 The choir is ready.  All in all there were about 50 people on the stage including musicians and singers. 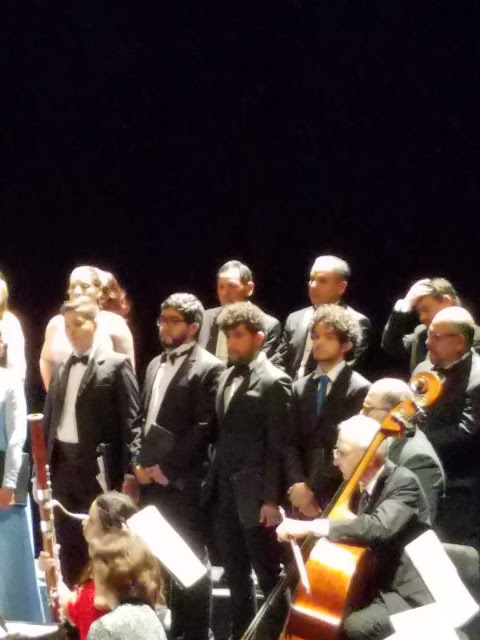 I wonder if all those curly headed young men are related! 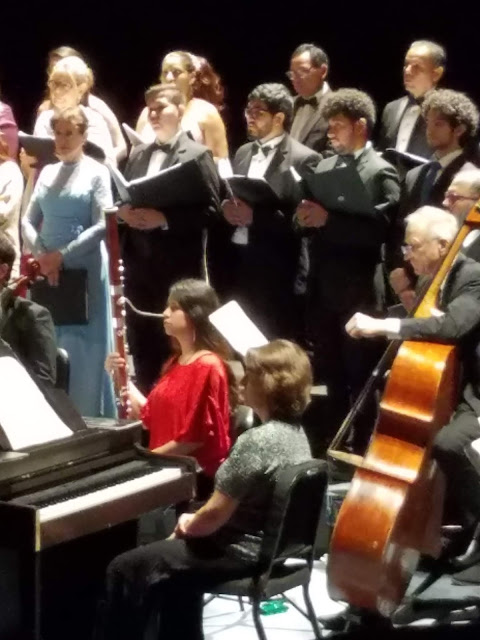 There was only one bassoonist and she was relatively young.  Mitzy Joselyn Burgueno.  Our younger daughter Erika played the bassoon in Junior High.  They picked her because of her very long finger reach.  "The bassoon requires relatively large hands and dexterous fingers to play. Most younger players will struggle to learn the bassoon due to having a small hand span and being unable to cover some of the open holes."  Krista played flute.  Neither went on to become musicians! 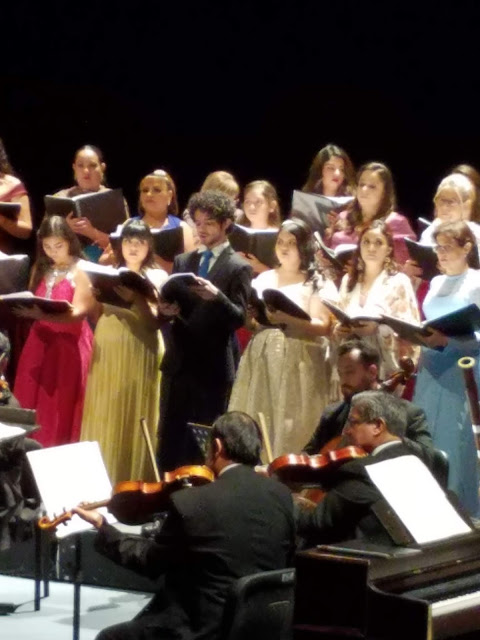 Baritone solo by the young Alejandro Hernandez Arrayales who made his debut on April 9th at the Culiacan Cathedral.  To Eric and I his voice lacked power but perhaps it was just that he was overpowered by the orchestra.  However that may change as he ages...I don't really know. 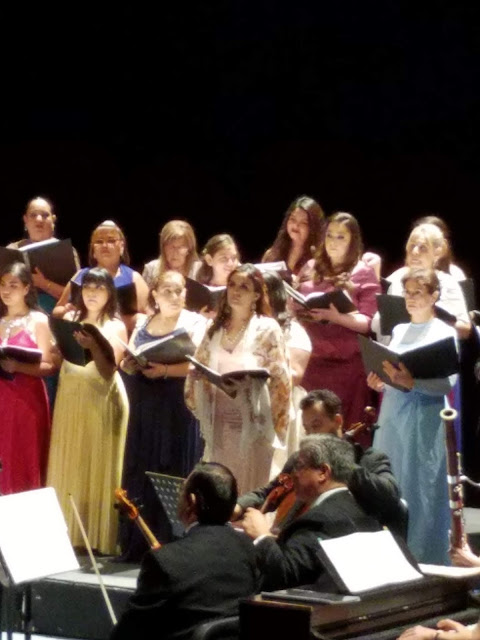 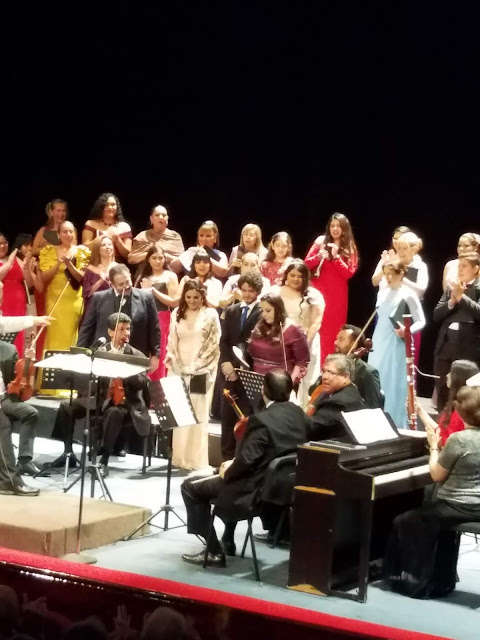 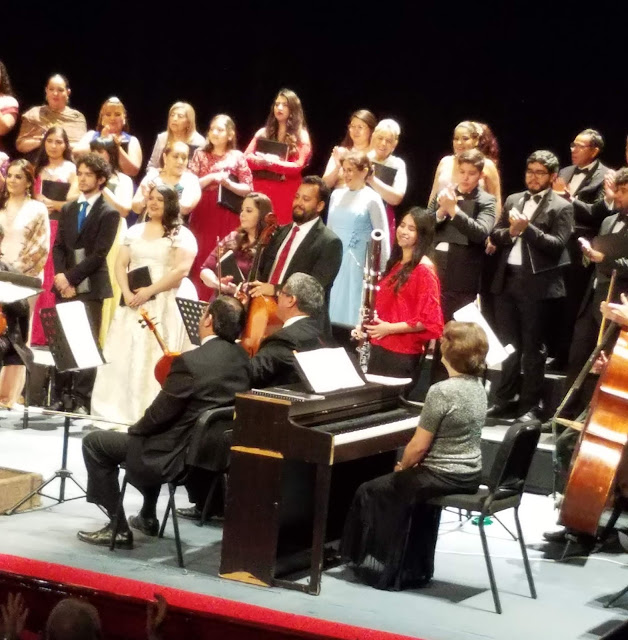 All in all it was a very uplifting concert that lasted about 1 1/2 hours with no intermission.  With that many people on stage it is not feasible to have them all leave the stage while the audience takes a break! 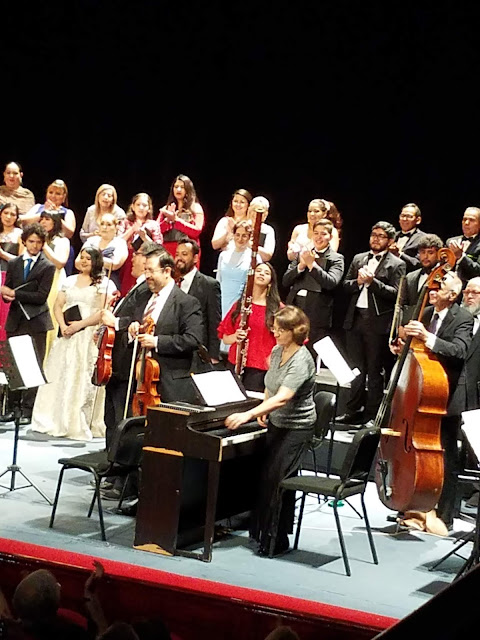 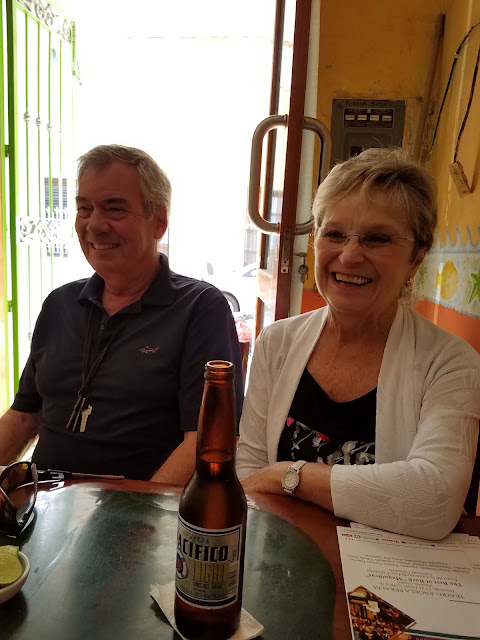 And now for lunch!  We wandered down Carnival to  Chon's which is a favorite with Eric. 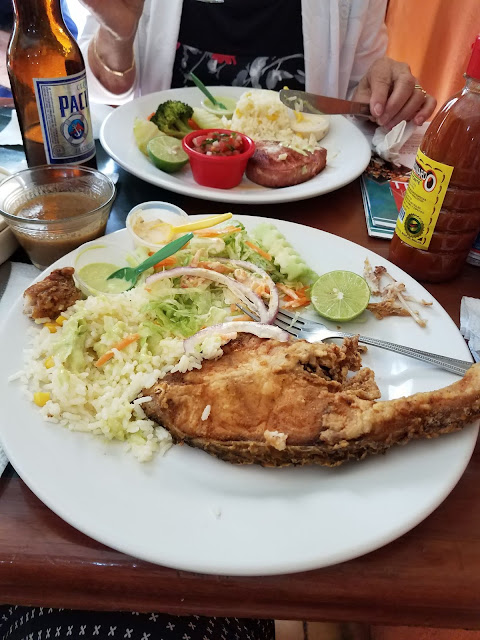 I had a fried fish steak which might not suit everyone but to me it's just delicious and when I was done there was only a small pile of bones!  Behind my plate you can see Linda's seared tuna steak with rice and vegetables.  All very good. 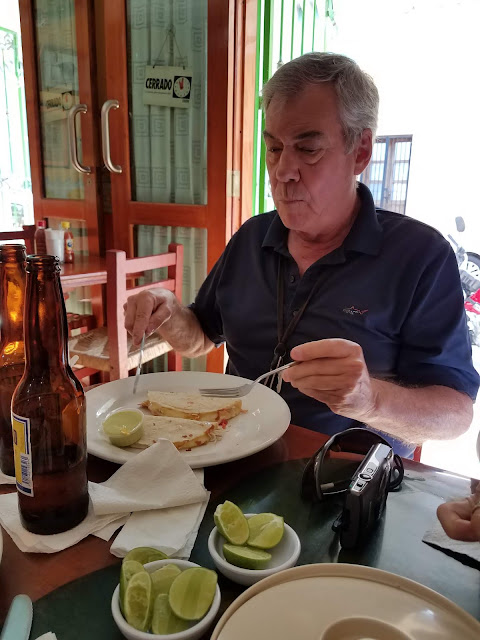 Ian had crab tacos goberanado.  Tacos with cheese as well as the crab. 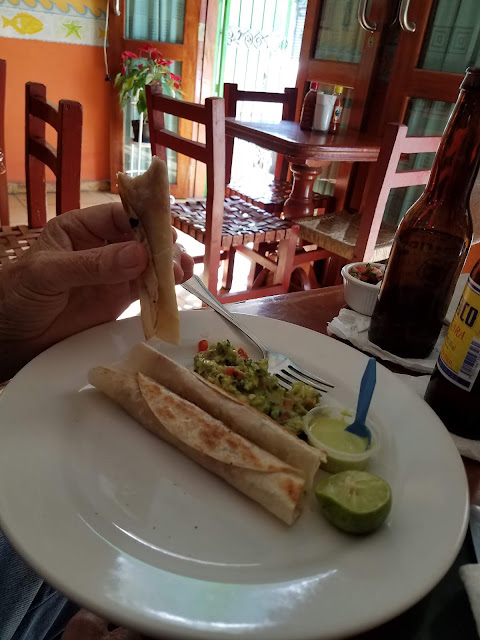 Eric loves marlin burritos!  A few beers and some good food and we were all ready to head home. 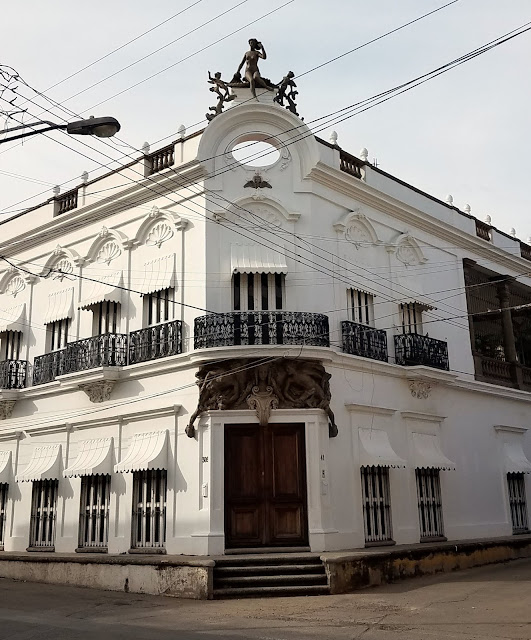 As we left the restaurant Eric noticed this building which appears to have been painted since we were here last year.  Looks lovely now.

We caught the bus behind the market and were home just before happy hour!  A light dinner of soup and crackers and the end to a very enjoyable Sunday afternoon.