Ladies lunch on Friday was at Agatha. This is one of my favorite places to eat because of the ...tuna!  The week before we arrived in November a very small ladies group (3) had eaten there so it was not out of line to go again. 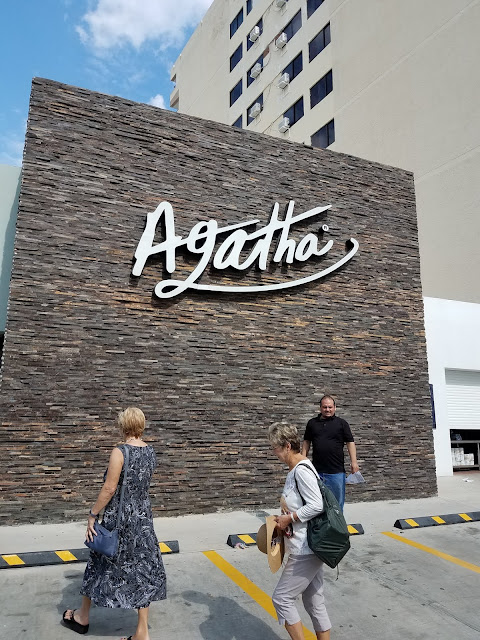 Agatha is located on the south end of Gaviotas in the Golden Zone.  Everyone pretty much arrived in dribs and drabs as many had been shopping before lunch.  As Agatha doesn't open until 1pm so there was time to browse before lunch. 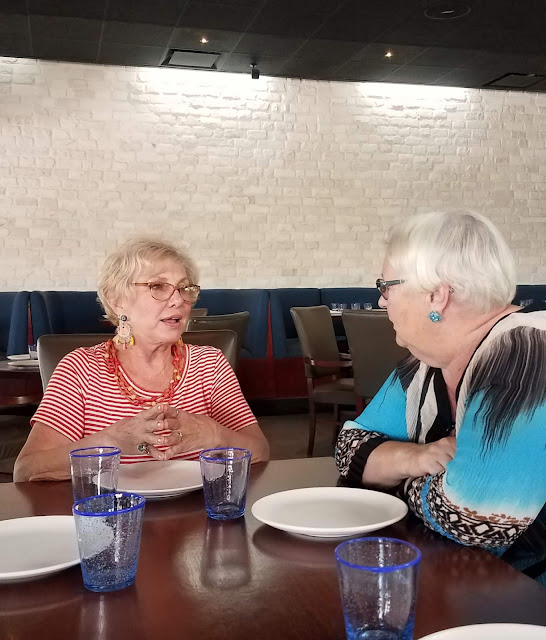 Ruth and Marion catch up.  Marion and Fred will be heading home on the 24th after a quick month in Mazatlan. 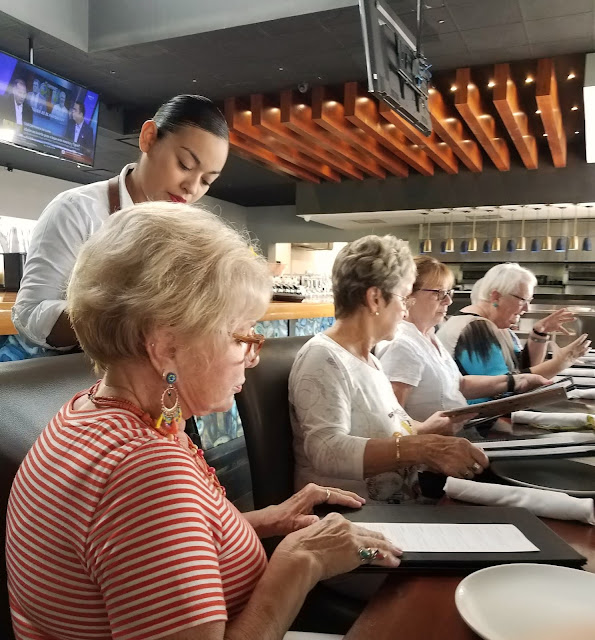 Perusing the menu, ordering drinks and something to eat. 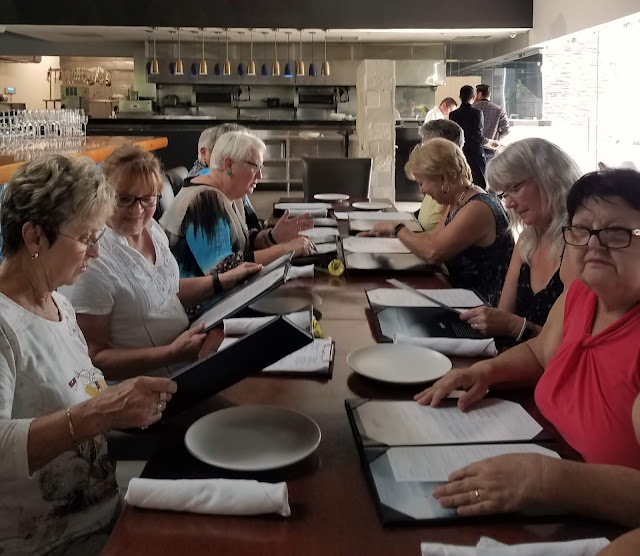 Lots of thought going into it! 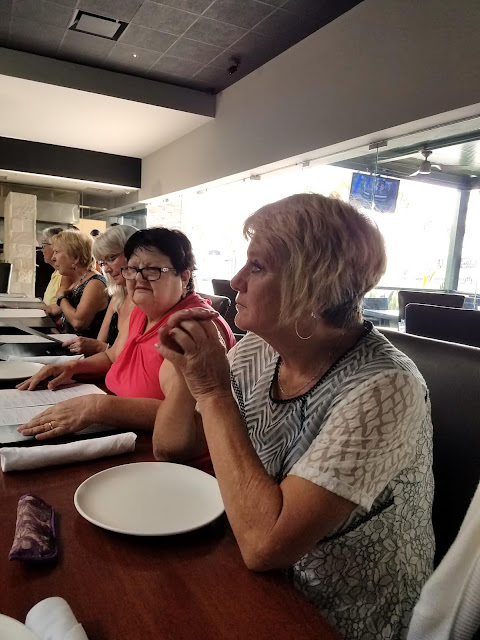 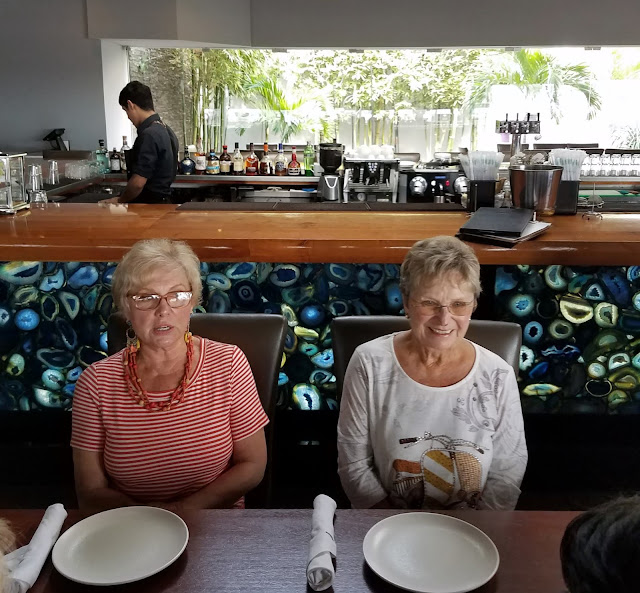 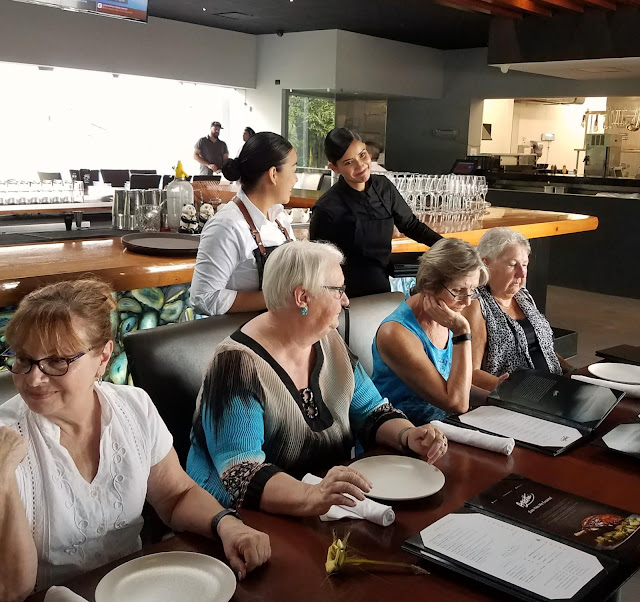 A very tasteful restaurant with excellent service and food.  Today we were their only lunch customers but...there wasn't a cruise ship in port so that might be why there was no one else eating. 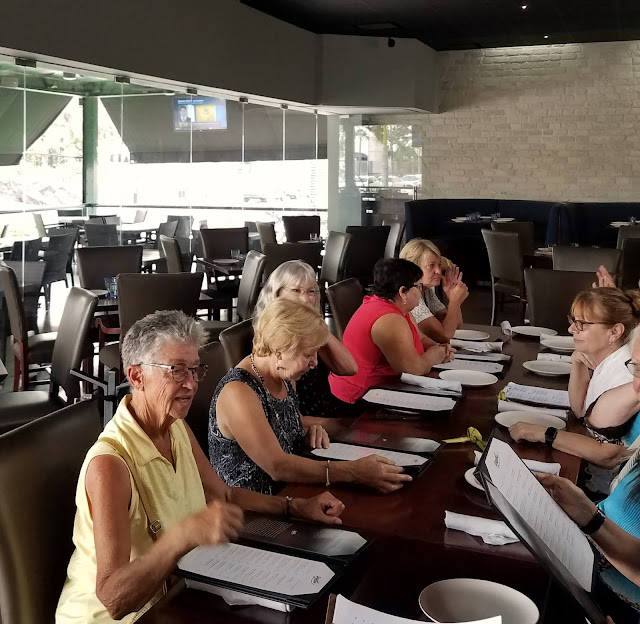 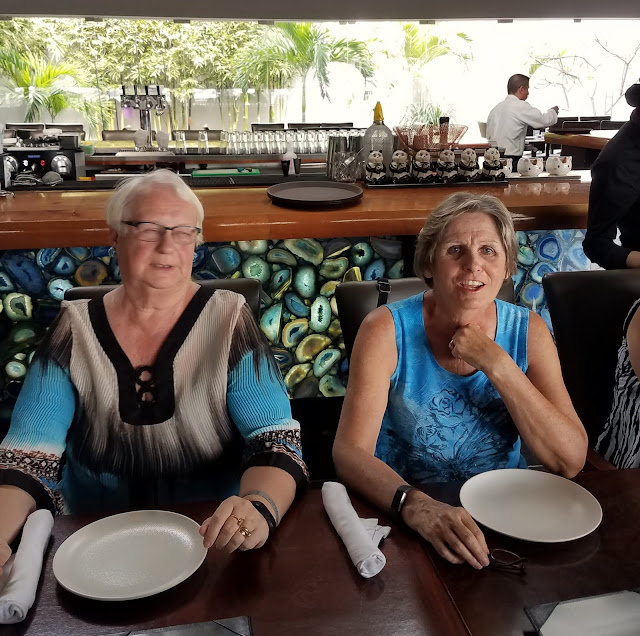 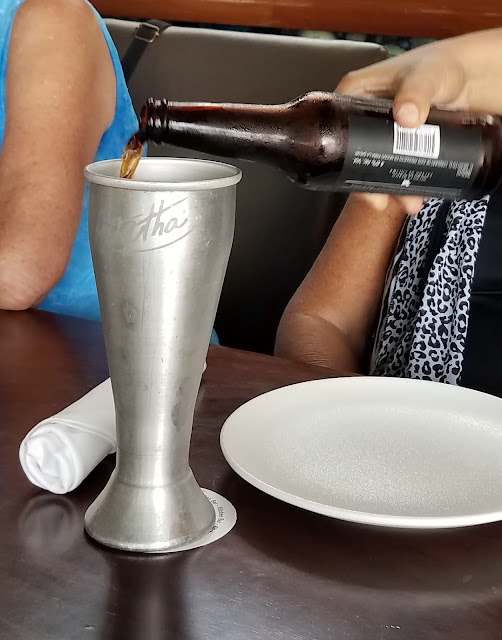 The beer is poured into ice cold metal glasses and when you lift it up they are so light it appears there is nothing in it! 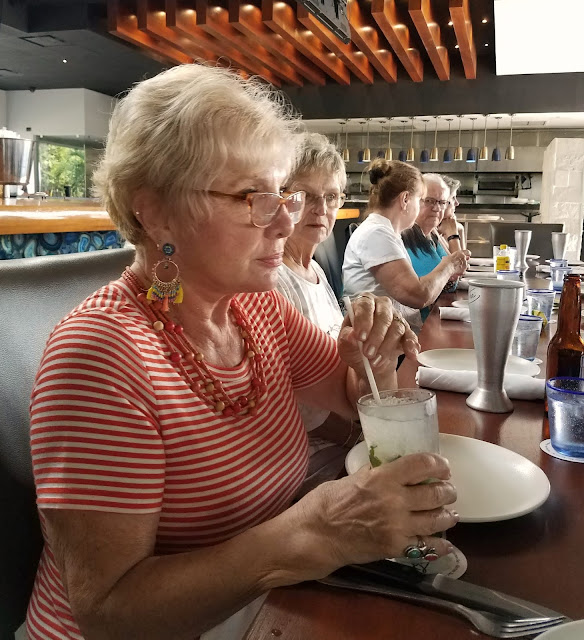 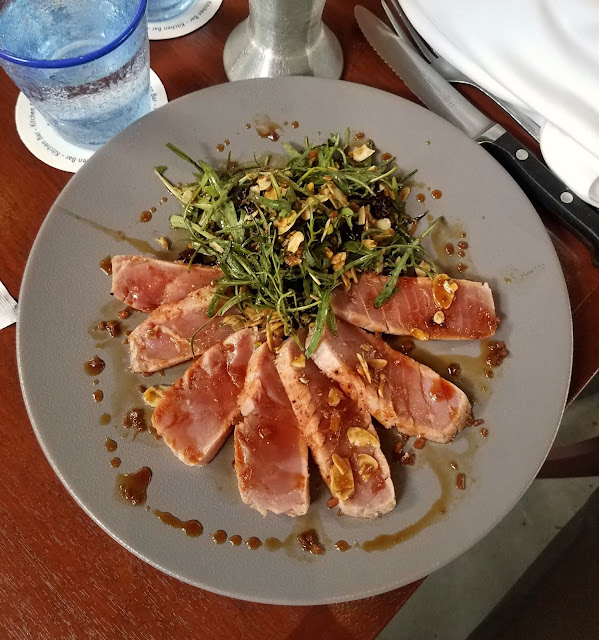 As usual I ordered tuna and I think it's the best I've eaten in Mazatlan although Latino's which is a stone's throw from our complex is pretty close.  Very rare with a ginger sauce and a salad that included cranberries.  Delicious. Both Linda and Diane ordered it as well. 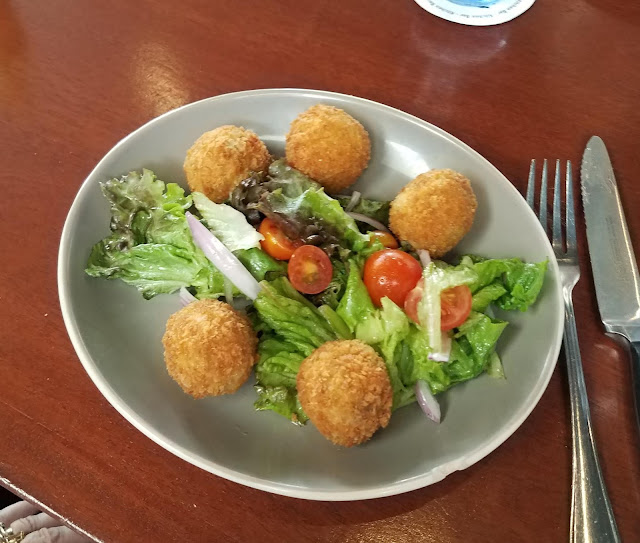 Crab balls were the other hit of the day and many ladies ordered them.  Again very good. 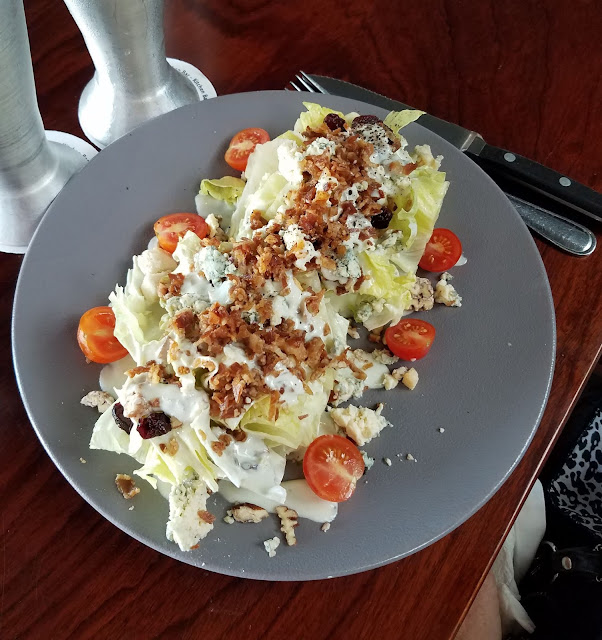 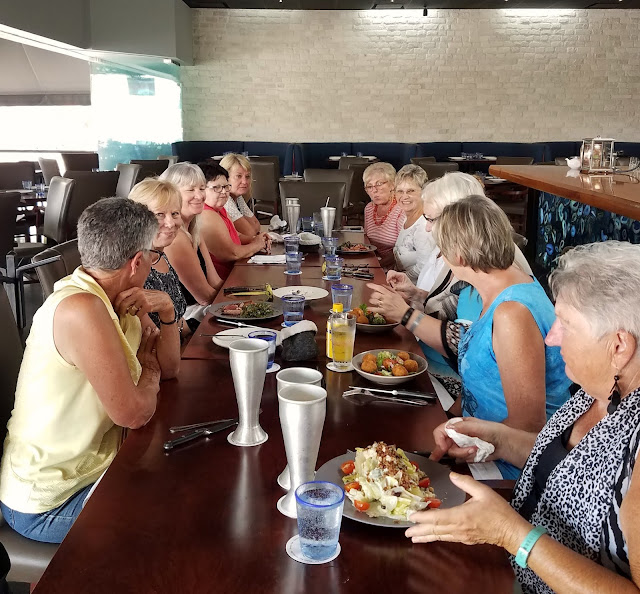 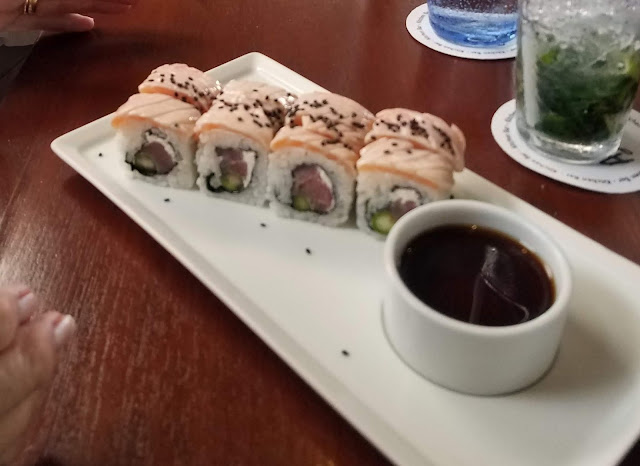 There is an Asian part to the menu at Agatha and Ruth and Pat ordered the same roll.  A meal on it's own. 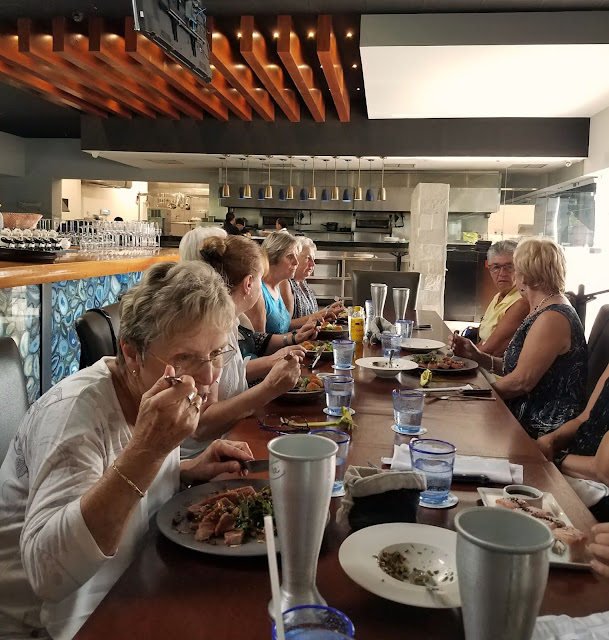 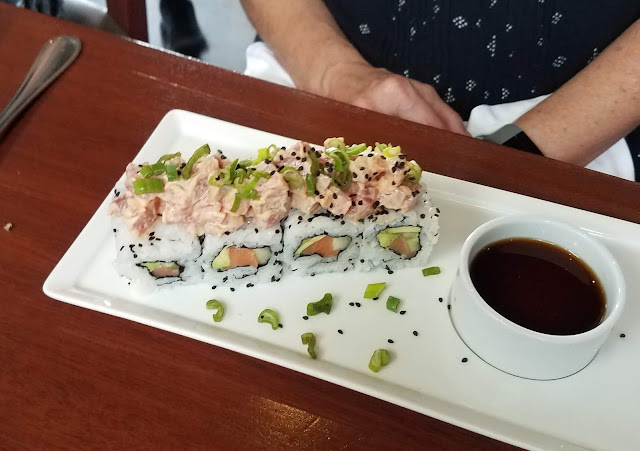 This one is slightly different. 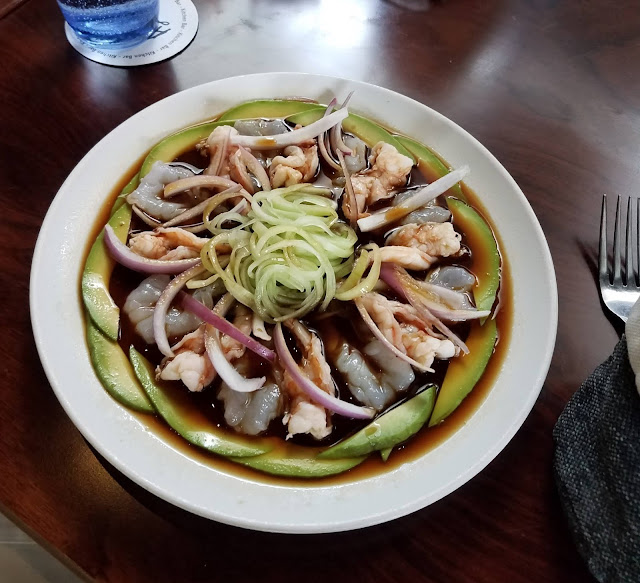 Susie had a seafood salad of sorts!  Always something different for her. 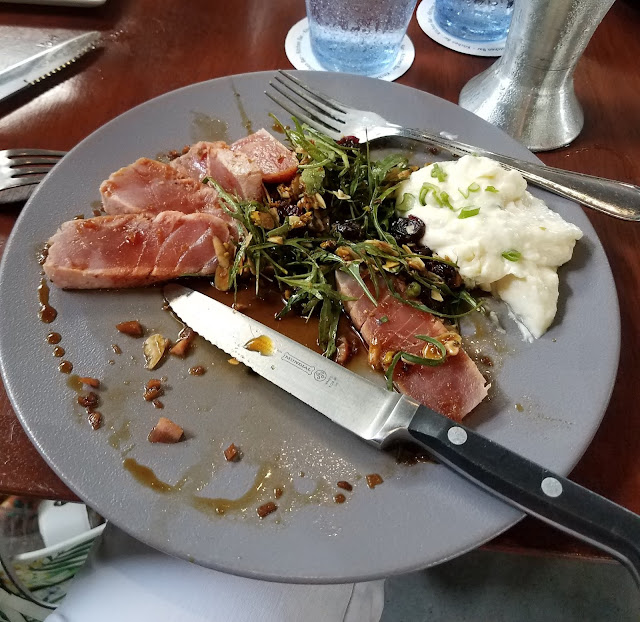 I decided I needed a side of whipped potatoes which were very rich and were likely filled with cream cheese.  It was a pretty large side so I shared with Linda and Diane.

When lunch was done no one ordered dessert....all full.  A very enjoyable lunch at an upscale restaurant.  thumbs up! Prices reflect the service and quality of the food but...not out of line.
Posted by Kathy Tycho at 5:04 PM

Have enjoyed your lunch blogs and Teacapan post on Otto's restaurant. Have you ever gone to the bakery in town - so good to get the freshly baked pan dulce and sit right down on the curb to eat it. Thanks for sharing with all of us.

I actually trek downtown on the bus once a week for fresh bakery bread. Store bread is just horrible!