Shortly after we arrived in the park Marion invited us to a “Welcome Back’' party on Tuesday around 4pm.  She and her husband Fred usually host a birthday party for Marion right after Christmas but this year they decided to shake things up a little and have a welcome back party for people they know in the park.  Lucky us ….we were invited.   Marion told me that Fred was cooking “northern” food.  Hmmm…..I wondered what that would be.  We do know that Fred is an avid hunter and fisherman so it could be anything.  Marion was making salads and the rest of us were to fill in the gaps. 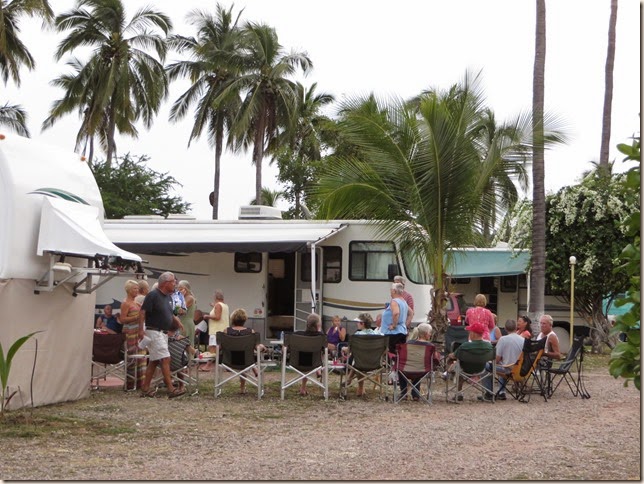 Yesterday was Tuesday so we  started to gather around 4pm for happy hour at their site.  In the past they have always parked in the middle row like us facing the door and awning west toward the road.  This year a reversal and a different row. 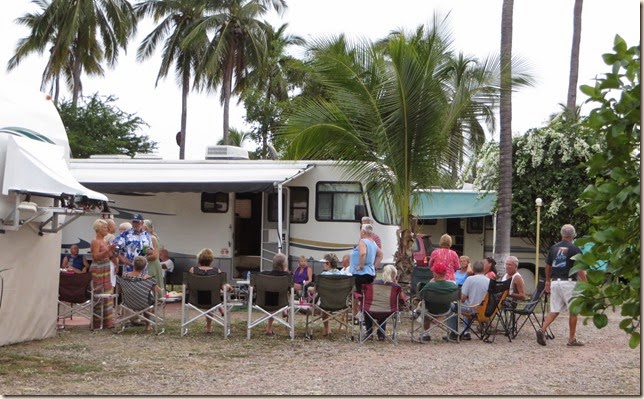 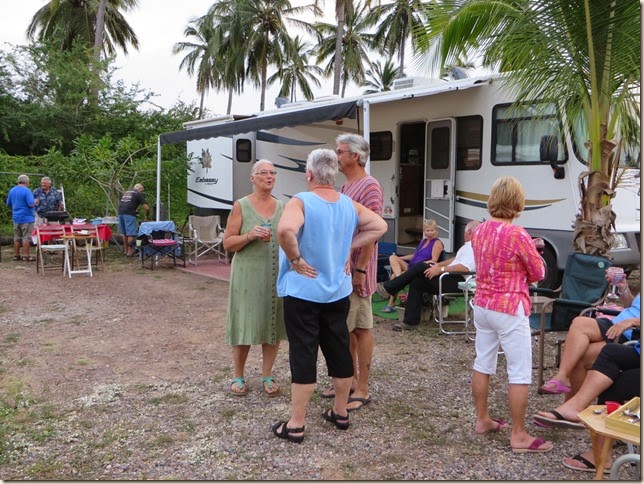 Helene is chatting to Marion while Hal stands by. 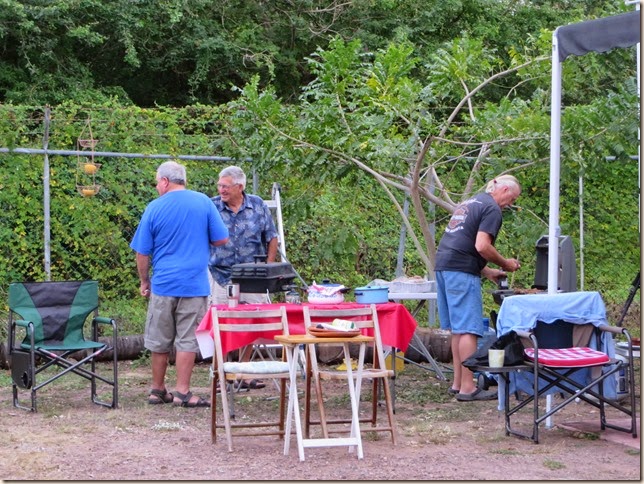 By 5:15 the barbecues were started.  That’s Sam on the right helping Fred barbecue….moose sausage.  Fred must have been lucky hunting this year as there were lots on the barbecue.  I’m sure many people have never eaten moose.  We have. 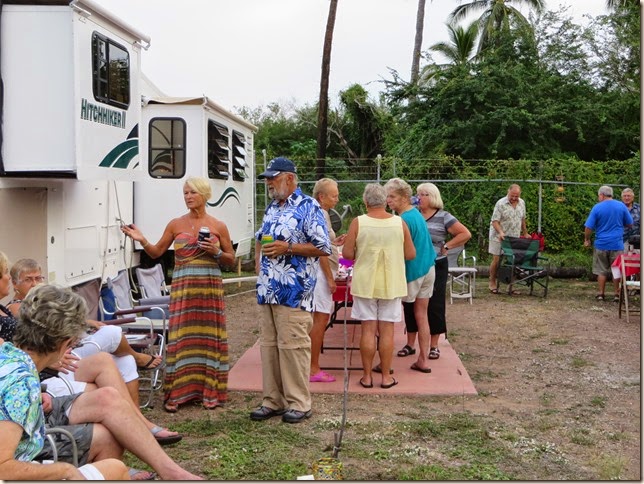 I think Carol is saying something really important. 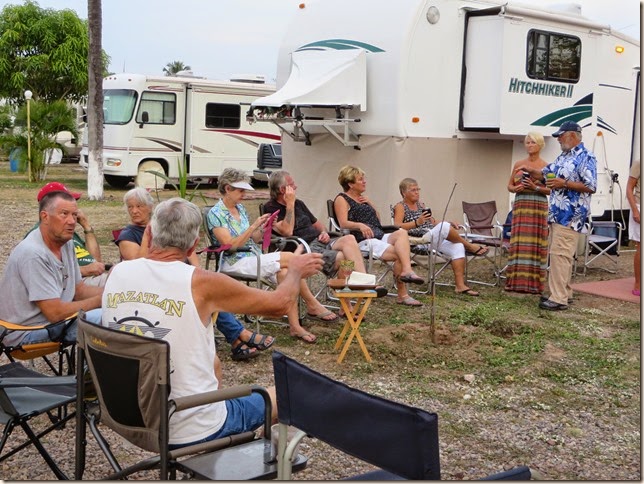 Eric is chatting to Dick. 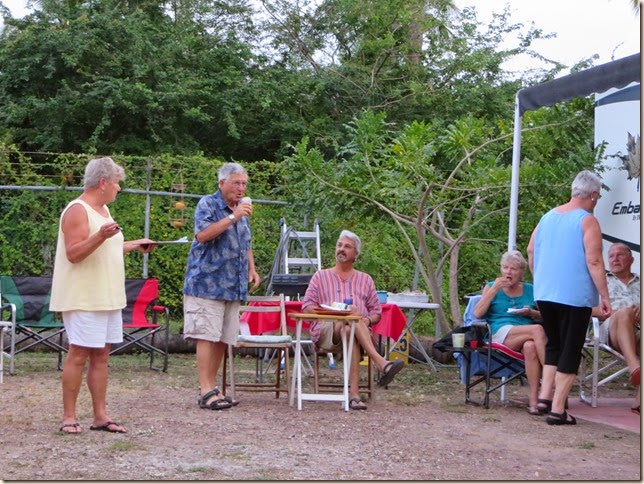 Jeanette has her clip board….time to sign up for Bocce. 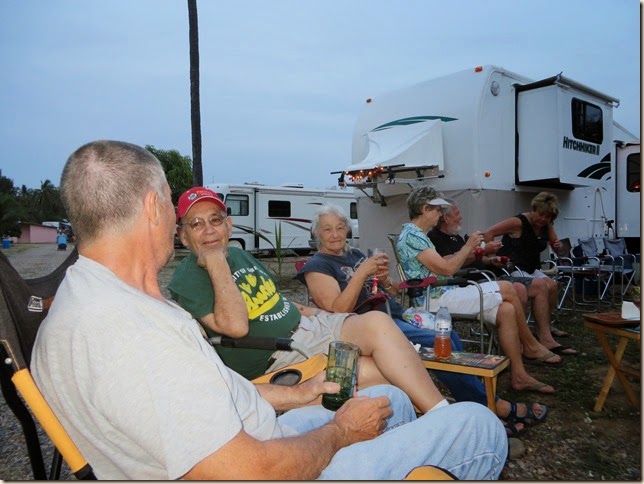 You can see that it’s starting to get dark.  This is a deadly time for the biting bugs.  Small no-see-ums  that give no warning sound and leave bites that itch like hell! 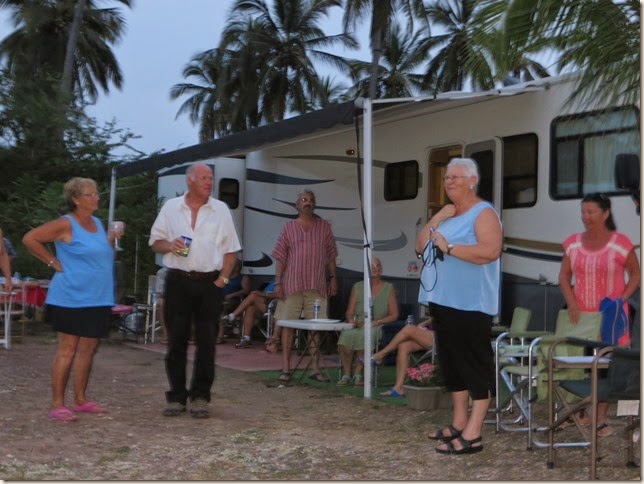 Marion welcomes us all back.  She and Fred are very generous and congenial hosts. 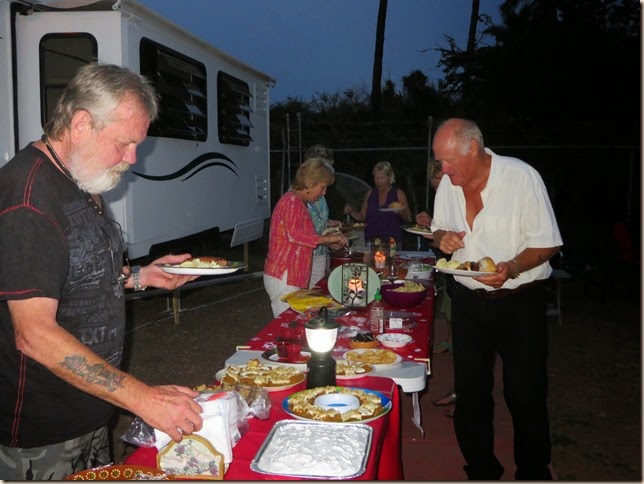 Look at that table full of food.  Just like all other years we will never go hungry! 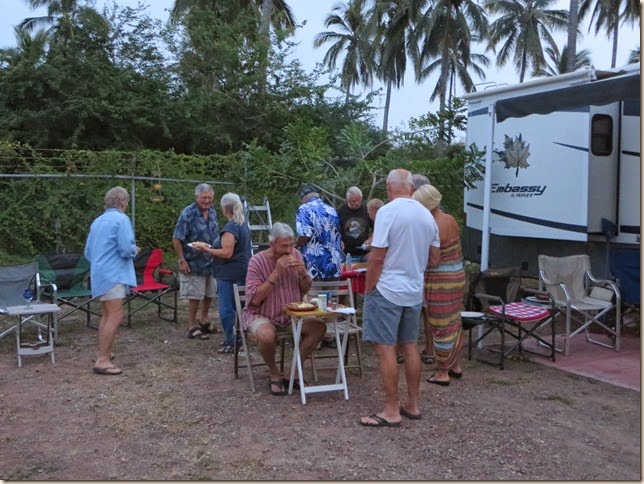 There was a big pile of fresh bolillos “Mexican buns” for the sausages that Fred and Sam were dolling out and a huge variety of salads along with fresh hot sauerkraut and onions.  All delicious and of course there was dessert.

I was going to take a picture of my scrumptious dinner but my camera said….sorry….the card’s full.  Drat.  I have another one but it was time to eat.

Shortly after six I noticed I was getting bitten even though I’d sprayed myself.  Eric had pants and socks on but his arms were getting chewed up.  Time to beat it inside the rig.  Some people don’t seem to be a target for the bugs…just don’t like them I guess!

It was a delicious dinner and everyone really enjoyed themselves.

P.S. --- today Eric’s hands are all swollen from bug bites.  He is now taking antihistamines and applying anti itch lotion.  Swell!  At home he gets bitten and doesn’t suffer any ill effects…not here.